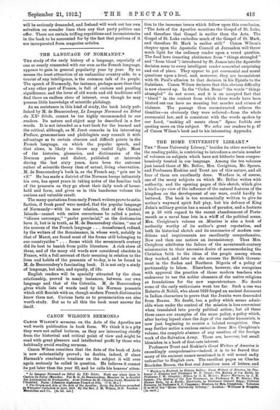 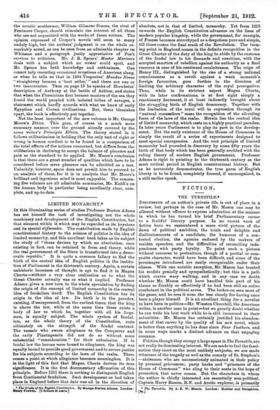 THE "Home University Library," besides its other services to the reading public, is contriving to introduce a certain number of volumes on subjects which have not hitherto been compre- hensively treated in our language. Among the ten volumes just issued those of Mr. Belloc, Mrs. Creighton, Mr. Spears, and Professors Erskine and Trent are of this nature, and all four of them are excellently done. Warfare is, of course, one of the many subjects on which Mr. Bence; writes with authority, and the opening pages of this sketch, which give a bird's-eye view of the influence of the natural features of the

kingdom on the development of our _wars, could hardly be bettered. The book is too economically written to give its

author's wayward spirit full play, but his defence of King John's military genius has a smack of-paradox, and a footnote on p. 50 with regard to the recent abandonment of Ports- mouth as a naval base lets in a whiff of the political arena. Mrs. Creighton's volume on Missions is also a book of authority worthy of its author's great reputation, and both its historical sketch and its summaries of modern con- ditions and requirements are excellently comprehensive. Now and then one notices an inconsistency. Thus Mrs. Creighton attributes the failure of the seventeenth-century missionaries to their excessive desire of accommodating the Christian faith to the ideas of the people among whom they worked, and later on she accuses the British Govern- ment in the Sudan and Northern Nigeria of • a policy of partizanship to Islam. Elsewhere, however, she recognizes with approval the practice of those modern teachers who endeavour to use the nobler elements of the native religions as foundations for the new superstructure. No doubt some of the early enthusiasts went too- far. Such a one was Roberto di Nobili, who about 1610 forged an ancient document in Indian characters to prove that the Jesuits were descended from Brame. No doubt, too, a policy which seems admir- able when under the control of the mission is less convenient when translated into purely political action ; but all these three cases are examples of the same policy, a policy which, after having lapsed since the days of the earlier humanists, is now just beginning to receive a belated recognition. One may further notice a curious omission from Mrs. Creighton's volume, the complete absence of any mention of the foreign work of the Salvation Army. These are, however, but small blemishes in a book of first-rate interest. Professors Trent and Erskine's Great Writers of America is exceedingly comprehensive—indeed, it is to be feared that many of the eminent names mentioned in it will sound sadly unfamiliar to English ears. The excellent pages on _Charles Brockden Brown, the first real American- man of letterii, and • Warfare in England, by Hilaire Bella, ; Great Writers of America,* Pro- fessor J. Erskine and Professor W. P. Trent; The Making of the Earth, by Professor J. W. Gregory ; Ethics, by G. E. Moore ; Master Mariners, by J. R. Spears; The Making of the New Testament, by Professor B. W. Bacon-; The rumen Body, by A. Keith; Electricity, by Professor Gisbert Kapp ; Economy, by Professor S. J. Chapman ; MUlfiegli; by Mr.. &,4ghtosi., Volumes 51 to 60 of the "Home University Library." London WMams kaforgater.. [Is. each.]

the erratic southerner, William Gilmour Simms, the rival of Fenimore Cooper, should stimulate the interest of all those who are not acquainted with the works of those writers. The opinion expressed of Cooper's novels will seem to many unduly high, but the authors' judgment is on the whole re- markably sound, as can be seen from an admirable chapter on Whitman and a paragraph justly appreciative of Poe's services to criticism. Mr. J. R. Spears' Master Mariners deals with a subject which no writer could spoil, and Mr. Spears has both knowledge and enthusiasm. One cannot help resenting occasional eruptions of American slang, as when he tells us that in 1504 Vespucins' Mundus Nevus " straightway became best seller,' " and there are one or two inaccuracies. Thus on page 18 he speaks of Herodotus' description of Anthony at the battle of Actium, and states that when the Phoenicians first became masters of the sea they found the world peopled with isolated tribes of savages, a statement which hardly accords with what we know of early Egyptian and Cretan civilizations. But, these blemishes apart, the book is effectively put together.

Not the least important of the new volumes is Mr. George Moore's Ethics. This goes, of course in a much more summary manner, over the ground already covered by the same writer's Principia Ethica. The theory stated in it follows utilitarianism in holding that the only test of right or wrong in human conduct is to be found in a comparison of the total effects of the actions concerned, but differs from the utilitarians in declining to accept the balance of pleasure and pain as the standard to be applied. Mr. Moore's conclusion is that there are a great number of qualities which have to be considered before mere pleasure can be admitted as a test. Unluckily, however, space does not permit him to proceed to an analysis of these, for it is in analysis that Mr. Moore's brilliant and ingenious mind is most enjoyable. The remain- ing five volumes are all admirable summaries, Mr. Keith's on the human body in particular being excellently clear, com- plete, and up-to-date.