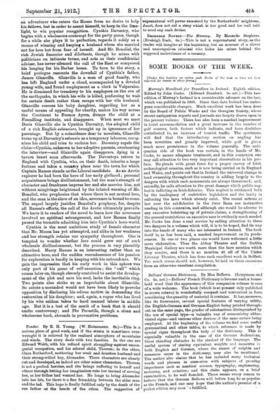 net.)—Bellows' French Dictionary is become such a house- -hold word that the appearance of this companion volume is sure of a wide welcome. The book (which is at-present only published in crown octavo) is wonderfully compact -and eonvenient in form considering the quantity of material it contains. It has,mereover, like its forerunner, several special features of varying utility, the English-German and-Gorman-English 'being printed through. out on the same page, the gender of substantives distinguished by the use of special'type-4 valuable way Of economizing abbre- viated signs—end various other devices of 'the same nature being employed. At the beginning of the volume we find some useful grammatical and other tables, to which reference is made 'by special signs throughout the body of the dictionary. This is especially valuable in the case of the German declensions, those standing obstacles to the student of the language. The useful system of stating equivalent weights and measures in both English and German, where the names of weights and measures occur in the dictionary, may also be mentioned. The author also claims that be has included many technical words and phrases in connexion with subjects of growing importance such as nautical science, typography, engineering, motoring, and aviation ; and this claim appears, on a brief examination, to be well founded. There seems every reason to believe that the German Bellows will before long be as popular as the French, and one may hope that-the author's promise of a pocket edition may soon .3 fulfilled.