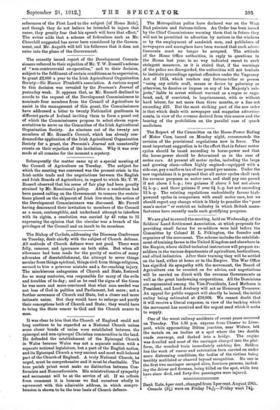 Page 3, 21 September 1912 — One of the worst railway accidents of recent years occurred
Close

One of the worst railway accidents of recent years occurred

on Tuesday. The 5.30 p.m. express from Chester to Liver- pool, while approaching Ditton junction, near Widnes, left the metals on an incline at a spot where the two double roads converge, and dashed into a bridge. The engine was derailed and most of the carriages charged into the plat- form, the wrecked train immediately catching fire. Seldom has the work of rescue and extrication been carried on under more distressing conditions, the bodies of the victims being terribly mutilated or charred beyond recognition. No one in the first two carriages escaped alive, fourteen persons, includ- ing the driver and fireman, being killed on the spot, while two have since died, and forty-five passengers were injured.