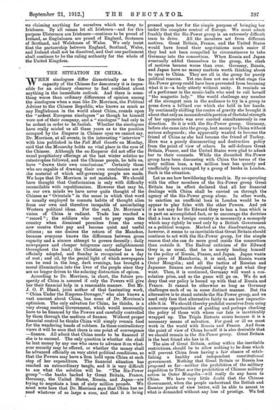 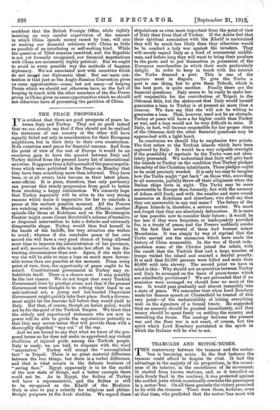 THE SITUATION IN CHINA.

WHEN sinologues differ diametrically as to the capacity of the Chinese for democracy it is impos- sible for an ordinary observer to feel confident about anything in the immediate outlook. And there is some- thing worse than ordinary differences of opinion among the sinologues when a man like Dr. Morrison, the Political Adviser to the Chinese Republic, who knows as much as any Englishman in the world about China, rounds upon the "ardent European sinologues " as though he himself were not of their company, and a " sinoloeme " had only to be ardent in order to be foolish. Whether the sinologues have really misled us all these years as to the position occupied by the Emperor in Chinese eyes we cannot say. Dr. Morrison, at all events, in the interesting " interview ' with him published in the Pall Mall Gazette on Monday, said that the Monarchy holds no vital place in the eyes of the Chinese. Although the ex-Emperor did not offer the usual propitiatory offerings at the last winter solstice no catastrophes followed, and the Chinese people, he tells us, have " drawn their own conclusions." Certainly those who are capable of drawing their own conclusions are of die material of which self-governing people are made. We hope that Dr. Morrison is not mistaken. We should have thought that Confucianism is only with difficulty reconcilable with republicanism. However that may be, in our own minds we have never quite thought of the Chinese as " Orientals " in the sense in which that word is usually employed to connote habits of thought alien from our own and therefore incapable of assimilating Western political ideas. For the rest, Dr. Morrison's vision of China is radiant. Trade has reached a " record " ; the soldiers who used to prey upon the country when dismissed penniless from the army now receive their pay and become quiet and useful citizens ; no one desires the return of the Manchus, because everyone knows the difference between gross rapacity and a sincere attempt to govern decently ; daily newspapers and cheaper telegrams carry enlightenment throughout the land ; the Christian calendar has been officially adopted, and Sunday is recognized as a day of rest ; and oil, by the genial light of which newspapers can be read in the long, dark evenings, has brought a moral illumination into the lives of the people since they are no longer driven to the solacing distraction of opium.

According to Dr. Morrison, in short, the future pro- sperity of China is assured if only the Powers will give her their financial help in a reasonable manner. But Mr. J. 0. P. Bland, joint author of that fascinating work, " China Under the Empress-Dowager," who also knows a vast amount about China, has none of Dr. Morrison's optimism. The only salvation for China, he thinks, is a very strong central Government, which would necessarily have to be financed by the Powers and carefully controlled by them through the medium of finance. Without proper financial control he thinks China will simply remain food for the wandering bands of robbers. In these contradictory views it will be seen that there is one point of convergence —finance. All admit that China needs to be financed if she is to succeed. The only question is whether she shall be lent money by any one who cares to advance it on what- ever security may be offered, or whether the money shall be advanced officially on very strict political conditions, so that the Powers may have a firm hold upon China at each step of her expenditure. The financial situation has reached an extraordinary tangle, and it is very difficult to see what the solution will be. "The Six-Power group "—the banks backed by Great Britain, France, Germany, the United States, Russia, and Japan—are trying to negotiate a loan of sixty million pounds. We must note here that Dr. Morrison says that China has no need whatever of so large a sum, and that it is being

pressed upon her for the simple purpose of bringing her under the complete control of Europe. We must admit frankly that the Six-Power group is an extremely difficult

team to drive. All the members act from different motives. Great Britain, France, and the United States would have found their negotiations much easier if they had not been compelled by circumstances to take Germany into the consortium. When Russia and Japan eventually added themselves to the group, the clash of motives became worse than ever. Germany, Russia, and Japan have no money markets worth thinking about to open to China. They are all in the group for purely political reasons. Yet one does not see at what stage the Six-Power group could have been prevented from becoming what it is—a body utterly without unity. It reminds us of a performer in the music-halls who used to call herself "the magnetic lady." She would challenge any number of the strongest men in the audience to try in a group to press down a billiard cue which she held in her hands. By continually shifting the centre of gravity she brought it about that only an inconsiderable portion of the total strength of her opponents was ever exerted simultaneously in one direction. So it is with the Six-Power group. Germany, before she came into the group, lent money to China without serious safeguards ; she apparently wanted to become the friend of China as she had become the friend of Turkey. Hers was a purely disconcerting and destructive policy from the point of view of others. In self-defence Great Britain, France, and the United States were glad to admit her to their counsels. While the disunited Six-Power group have been discussing with China the terms of the sixty million loan, a ten million loan has quietly and unofficially been arranged by a group of banks in London. Such is the situation.

Let us see how bewildering the result is. By co-operating with the other members of the Six-Power group Great Britain has in effect declared that all her financial dealings with China shall be carried on through the agency of the Six-Power group alone. In other words, to sanction an unofficial loan in London would be to appear to play false with the other Powers. And yet it is not easy for Sir Edward Grey to ban a loan which is in part an accomplished fact, or to encourage the doctrine that a loan to a foreign country is necessarily a monopoly which may rightly be used only by a British Government as a political weapon. Marked as the disadvantages are, however, it seems to us inevitable that Great Britain should continue to act with the Six-Power group, for the simple reason that she can do more good inside the consortium than outside it. The Radical criticism of Sir Edward Grey is, as usual, that he is merely lending himself to the policy of Russia, France, and Japan. Japan wants her piece of Manchuria, it is said, and Russia wants Outer Mongolia; and all the tactics of Russian and Japanese finance are designed simply to get what they want. Then, it is continued, Germany will want a con- solation prize, and so the game will go on. We do not deny that our policy is bound up with that of Russia and France. It cannot be otherwise so long as Germany challenges each of us in some distinct manner. But the alternative is to stand outside the Six-Power group, and we need only face that alternative fairly to see how impractic- able it is. We should thereby prohibit ourselves from using numerous opportunities of guiding and perhaps checking the policy of those with whom our fate is inextricably wrapped up. The Triple Entente exists because it is a necessary means of salvation. For good or ill we must

work in the world with Russia and France. And from the point of view of China herself it is also desirable that we should remain in the Six-Power group. Great Britain is the best friend she has in it. The aim of Great Britain, acting within the inevitable restrictions, should be to allow nothing to be done which will prevent China from having a fair chance of estab- lishing a healthy and independent constitutional government. Nothing that Great Britain or Russia has proposed so far—neither the prohibition of the military expedition to Tibet nor the prohibition of Chinese military action in Outer Mongolia—will really do any harm to China. We have very little doubt that the Chinese Government., when the people understand the British and Russian points of view better, will be able to assent to what is demanded without any loss of prestige. We feel confident that the British Foreign Office, while rightly insisting on very careful supervision of the manner in which China spends money raised by loan, will aim at making our financial relations with China as little as possible of an interfering or self-seeking kind. While the question of Tibet remains unsettled, and the Republic is not yet formally recognized, our financial negotiations with China are necessarily highly political. But we ought to avoid in every possible way the methods of bagman diplomacy. We are associated now with countries which do not accept our diplomatic ideal. But our main con- tention is that just as the Anglo-Russian Convention gives us some opportunities—some, but not many—of helping Persia which we should not otherwise have, so the fact of keeping in touch with the other members of the Six-Power group in China gives us some opportunities which we should not otherwise have of preventing the partition of China.