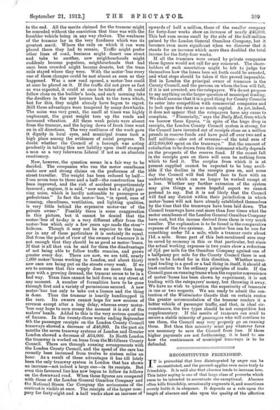 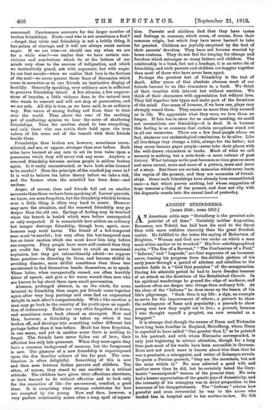 TT is proverbial that love disintegrated by anger can be reconstituted, and the proverb applies even more truly to friendship. It is said also that absence tends to increase love. This latter saying is one of that large class of proverbs which seem to be intended to accentuate the exceptional. Absence often kills friendship, occasionally augments it, and sometimes merely holds it in abeyance. It depends as a rule upon the length of absence and also upon the quality of the affection

concerned. Carelessness accounts for the larger number of broken friendships. Fools—and who is not sometimes a fool P —forget that while real friendship is not a brittle thing, it has points of cleavage, and it will not always resist serious anger. If we are wise—or should one say when we are for a while wise ?—we realize that we have certain con- victions and conclusions which lie at the bottom of our minds very close to the sources of indignation, and which we instinctively guard, not with argument, but with anger.

In our best moods—when we realize that love is the fortune of the soul—we never pursue those lines of discussion which rouse in ourselves or in our friends an instinctive display of hostility. Generally speaking, very ordinary care is sufficient to preserve friendship intact. A few silences, a few suppres- sions of impulse, a little violence done to the natural man who wants to convert and will not stop at persecution, and we are safe. All this is true, as we have said; in an ordinary way. But waves of strong feeling roll from time to time over the world. Then above the roar of the seething pot of conflicting opinion we hear the noise of shattering friendships. Then the careless stand to lose everything, and only those who can retain their hold upon the true values of life come out of the tumult with their friends beside them.

Friendships thus broken are, however, sometimes recon- stituted, and are, or appear, stronger than ever before. Both sides have learned at any rate to set its true value upon a possession which they will never risk any more. Anyhow, a renewed friendship between serious people is seldom broken again. Is it really reconstructed, or have both sides learned to be careful P Does the principle of the cracked jug come in P It is well to believe the latter theory before we take a risk, and the former when the mischief has been done—and un done.

Anger, of course, rises and friends fall out on smaller accounts than those we have been speaking of. Lovers' quarrels, we know. are soon forgotten, but the friendship whiclris broken over a little thing is often very hard to renew. Humour may save the situation, and the renewed friendship may go deeper than the old one. Springs of feeling may be touched when the breach is healed which were before unsuspected or only suspected. It is remarkable how seldom an ordinary hot temper destroys friendship, though here, again, care- lessness may work havoc. The friend of a hot-tempered man must be careful; but very often the hot-tempered man has an inner caution which one must know lira long before one suspects. Fiery people have more self-control than they get credit for. They never learn to avoid an occasional explosion, but they get extraordinarily adroit—we suppose from practice—in directing its force, and become skilful in avoiding disaster, more skilful sometimes than those less accustomed to find themselves beside themselves, so to speak. These latter, when unexpectedly roused, are often horribly bitter of speech, and give a far worse wound than men who are known to lay about them upon small provocation.

Absence, prolonged absence, is, on the whole, far more inimical to friendship than anger, yet friends come together again after very long partings and even find an augmented delight in each other's companionship. With a like emotion a man may go back to the country of his youth upon an expedi- tion of rediscovery. Exiles are very often forgotten at home, and sometimes come back almost as strangers. Now and then, however, a friendship is taken up where it was broken off, and develops into something rather different but perhaps better than it was before. Much has been forgotten, in one sense, and yet in another sense there is nothing to forget. The friends have never fallen out of love ; their affection has only lain quiescent. When they meet again they have a common background of memory, but the foreground is new. The glamour of a new friendship is superimposed upon the dim familiar colours of the far past. The com- bination is often delightful. Something of this is now and then seen between Indian parents and children. Too often, of course, they stand to one another in a critical attitude. The children have given their affections elsewhere, or have learned to do without affection and to look only for the amenities of life—for amusement, comfort, a good time. It is surprising what strange substitutes for love are accepted by the young. Now and then, however, a very perfect relationship arises after a long spell of separa- tion. Parents and children find that they have tastes and feelings in common, which come, of course, from their common origin, but which they have never learned to take for granted. Children are joyfully surprised by the fact of their parents' devotion. They have not become wearied by home customs. They do not feel the longing for change and freedom which estranges so many fathers and children. The relationship is a bond, but not a bondage, it is an extra tie of friendship, and such parents and children are happier together than most of those who have never been apart.

Perhaps the greatest test of friendship is the test of death. After years of that absolute absence most of our friends become to us like characters in a book. We think of their troubles with interest but without emotion. We think of their characters with appreciation but without love. They fall together into types and make part of the furniture of the mind. Our sense of humour, if we have one, plays very strongly round them. They amuse us more than they amused us in life. We appreciate what they were, we love them no longer. If fate has in store for us another meeting, we could not reconstitute our friendship—it is dead. It is because this feeling is so common that certain exceptions stand out in all our memories. There are a few dead people whom we feel, whatever our eschatological conclusions, to be alive. Like all live things they change a little, always for the better; but they never become paper people—never take their places with the well-drawn characters in books. Much of what we call memory is nothing but a note-book—a mere volume of past history. What belongs to the past becomes as time goes on more and more unreal, more and more of a picture, more and more of a story. But there are certain memories which never leave the region of the present, and they are memories of friend- ships. Some such friendships have already been reconstituted once—a fact which proves nothing, but whose suggestion of hope remains a thing of the present, and does not slip with the dogmatic creeds into the unreal land of yesterday.