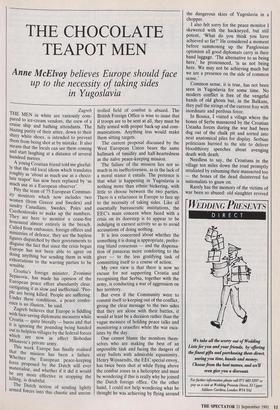 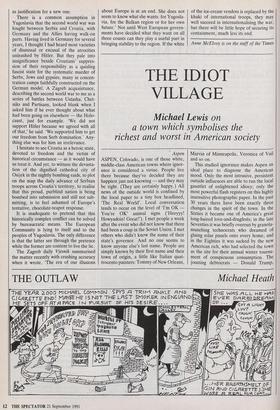 up to the necessity of taking sides in Yugoslavia

Zagreb THE MEN in white are variously com- pared to ice-cream vendors, the crew of a cruise ship and bathing attendants. The blazing purity of their attire, down to their shiny white shoes, is intended to prevent them from being shot at by mistake. It also means that the locals can see them coming and start laughing at a distance of several hundred metres.

A young Croatian friend told me gleeful- ly that the old local idiom which translates roughly as 'about as much use as a choco- late teapot' has now been replaced by 'as much use as a European observer'. Pity the team of 75 European Commun- ity monitors which now includes two women (from Greece and Sweden) and sundry Canadians, Swedes, Poles and Czechoslovaks to make up the numbers. They are here to monitor a cease-fire honoured almost entirely in the breach. Culled from embassies, foreign offices and ministries of defence, they are the hapless figures dispatched by their governments to disguise the fact that since the crisis began Europe has not been able to agree on doing anything bar sending them in with exhortations to the warring parties to be sensible.

Croatia's foreign minister, Zvonimir Separovic, has made his opinion of the European peace effort abundantly clear, castigating it as slow and ineffectual. 'Peo- ple are being killed. People are suffering. Under these conditions, a peace confer- ence is an illusion,' he said. Zagreb believes that Europe is fiddling with face-saving diplomatic measures while C. roatia — quite literally — burns and that it is ignoring the pounding being handed out to helpless villages by the federal forces which are now in effect Slobodan Milosevic's private army. This week Europe has finally realised that the mission has been a failure. Whether the European peace-keeping force proposed by the Dutch will ever materialise, and whether if it did it would be any more effective in stopping the killing, is doubtful. The Dutch notion of sending lightly armed forces into this chaotic and uncon- trolled field of combat is absurd. The British Foreign Office is wise to insist that if troops are to be sent at all, they must be fully armed with proper back-up and com- munications. Anything less would make them sitting targets.

The current proposal discussed by the West European Union bears the same hallmark of timidity and half-heartedness as the naïve peace-keeping mission.

The failure of the mission lies not so much in its ineffectiveness, as in the lack of a moral stance it entails. The pretence is that what is happening in Yugoslavia is nothing more than ethnic bickering, with little to choose between the two parties.

There is a reluctance in Europe to face up to the necessity of taking sides. Like all essentially bureaucratic institutions, the EEC's main concern when faced with a crisis on its doorstep is to appear to be indulging in earnest activity so as to avoid accusations of doing nothing.

It is less concerned about whether the something it is doing is appropriate, prefer- ring bland consensus — and the dispensa- tion of panaceas more comforting to the giver — to the less gratifying task of committing itself to a course of action.

My own view is that there is now no excuse for not supporting Croatia and recognising that Serbia, together with the army, is conducting a war of aggression on her territory.

But even if the Community were to commit itself to keeping out of the conflict, giving the clear message to the two sides that they are alone with their battles, it would at least be a decision rather than the vague measure of holding peace talks and monitoring a ceasefire while the war esca- lates by the day.

One cannot blame the monitors them- selves who are making the best of an impossible task and facing the dangers of stray bullets with admirable equanimity. Henry Wijnaendts, the EEC special envoy, has twice been shot at while flying above the combat zones in a helicopter and must be wondering if this is really why he joined the Dutch foreign office. On the other hand, I could not help wondering what he thought he was achieving by flying around the dangerous skies of Yugoslavia in a chopper.

I also felt sorry for the peace monitor I skewered with the hackneyed, but still potent, 'What do you think you have achieved so far?' He considered a moment before summoning up the Panglossian optimism all good diplomats carry in their hand luggage. 'The alternative to us being here,' he pronounced, 'is us not being here. We may not be achieving much but we are a presence on the side of common sense.'

Common sense, it is true, has not been seen in Yugoslavia for some time. No modern conflict is free of the vengeful hands of old ghosts but, in the Balkans, they pull the strings of the current fray with inordinate and perilous force.

In Bosnia, I visited a village where the bones of Serbs massacred by the Croatian Ustasha forces during the war had been dug out of the chalk pit and sorted into neat anatomical piles for display. Serbian politicians hurried to the site to deliver bloodthirsty speeches about avenging death with death.

Needless to say, the Croatians in the village ten miles down the road promptly retaliated by exhuming their massacred too — the bones of the dead disinterred for nationalists to gnaw on.

Rarely has the memory of the victims of war been so abused: old slaughter revived as justification for a new one.

There is a common assumption in Yugoslavia that the second world war was fought between Serbia and Croatia, with Germany and the Allies having walk-on parts. Having lived in Germany for several years, I thought I had heard most varieties of dismissal or excusal of the atrocities unleashed by Hitler. But they pale into insignificance beside Croatians' suppres- sion of their responsibility as a quisling fascist state for the systematic murder of Serbs, Jews and gypsies, many in concen- tration camps faithfully constructed on the German model. A Zagreb acquaintance, describing the second world war to me as a series of battles between Ustasha, Chet- niks and Partisans, looked blank when I asked him if he ever thought about what had been going on elsewhere — the Holo- caust, just for example. 'We did not support Hitler because we agreed with all of that,' he said. 'We supported him to get our freedom from Serb domination.' Any- thing else was for him an irrelevance.

I hesitate to see Croatia as a heroic state, devoted to freedom and the victim of historical circumstance — as it would have us treat it. And yet, to witness the devasta- tion of the dignified cathedral city of Osijek in the nightly bombing raids, to plot on the map the daily advance of Serbian troops across Croatia's territory, to realise that this proud, purblind nation is being bombed into submission and still not sub- mitting, is to feel ashamed of Europe's tentative, chocolate-teapot response.

It is inadequate to pretend that this historically complex conflict can be solved by bureaucratic means. The European Community is lying to itself and to the peoples of Yugoslavia. The only difference is that the latter see through the pretence while the former are content to live the lie.

The Zagreb daily Vjesnik summarised the matter recently with crushing accuracy when it wrote, 'The era of our illusions about Europe is at an end. She does not seem to know what she wants: for Yugosla- via, for the Balkan region or for her own future.' Not until West European govern- ments have decided what they want on all three counts can they play a useful part in bringing stability to the region. If the white of the ice-cream vendors is replaced by the khaki of international troops, they may well succeed in internationalising the war, but there will be little hope of securing its containment, much less its end.

Anne McElvoy is on the staff of the Times