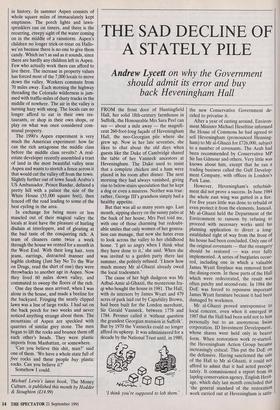 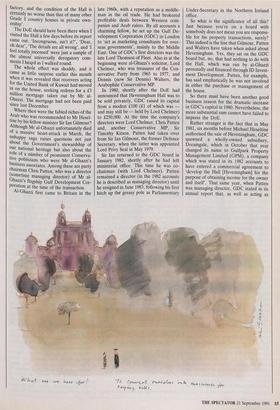 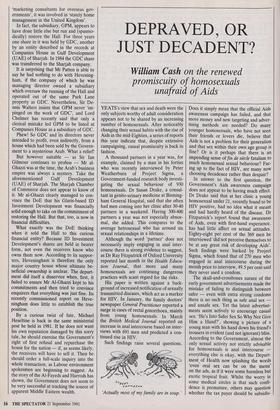 THE SAD DECLINE OF A STATELY PILE

Andrew Lycett on why the Government

should admit its error and buy back Heveningham Hall

FROM the front door of Huntingfield Hall, her solid 18th-century farmhouse in Suffolk, the Honourable Mrs Sara Peel can see — about a mile away — the magnifi- cent 260-foot-long façade of Heveningham Hall, the neo-Georgian pile where she grew up. Now in her late seventies, she likes to chat about the old days when guests like the Duke of Cambridge shared the table of her Vanneck ancestors at Heveningham. The Duke used to insist that a complete chicken and a ham were placed in his room after dinner. The next morning they had always vanished, giving rise to below-stairs speculation that he kept a dog or even a mistress. Neither was true: rather, George III's grandson simply had a healthy appetite.

But that was all so many years ago. Last month, sipping sherry on the sunny patio at the back of her house, Mrs Peel told me, with one of those charming but redoubt- able smiles that only women of her genera- tion can manage, that now she hates even to look across the valley to her childhood home. 'I get so angry when I think what they have done to it,' she said. When she was invited to a garden party there last summer, she politely refused. knew how much money Mr al-Ghazzi already owed the local tradesmen.'

The cause of her high dudgeon was Mr Adbul-Amir al-Ghazzi, the mysterious Ira- qi who bought the house in 1981. The Hall, with its interiors by James Wyatt and 479 acres of park laid out by Capability Brown, had been built for the London merchant, Sir Gerald Vanneck, between 1778 and 1784. Pevsner called it 'without question the grandest Georgian mansion in Suffolk'. But by 1970 the Vannecks could no longer afford its upkeep. It was administered for a decade by the National Trust until, in 1980, `I think you're supposed to lob them.' the new Conservative Government de- cided to privatise it.

After a year of casting around, Environ- ment Minister Michael Heseltine informed the House of Commons he had agreed to sell Heveningham (pronounced Henning- ham) to Mr al-Ghazzi for £726,000, subject to a number of covenants. The Arab had been recommended by Conservative MP Sir Ian Gilmour and others. Very little was known about him, except that he ran a trading business called the Gulf Develop- ment Company, with offices in London's Park Lane.

However, Heveningham's refurbish- ment did not prove a success. In June 1984 the whole east wing was gutted in a fire. For five years little was done to rebuild or even protect it from the elements. Instead. Mr al-Ghazzi held the Department of the Environment to ransom by refusing to proceed with necessary works until his planning application to divert a long- established right of way from the front of his house had been concluded. Only one of the original covenants — that the orangery' should be restored — was ever fully implemented. A series of burglaries occur- red, including one in which a valuable James Wyatt fireplace was removed from the dining-room. In those parts of the Hall which were redecorated, the result was often patchy and second-rate. In 1984 the DoE was forced to repossess important James Wyatt furniture because it had been damaged by workmen.

Mr al-Ghazzi proved unresponsive to local concern, even when it emerged in 1987 that the Hall had been sold not to him personally but to an anonymous Swiss corporation, ID Investment Development, whose shares were held only in bearer form. When restoration work re-started, the Heveningham Action Group became increasingly critical. This put the DoE on the defensive. Having sanctioned the sale of the Hall to Mr al-Ghazzi, it could not afford to admit that it had acted precipi- tately. It commissioned a report from its lapdog conservation agency, English Herit- age, which duly last month concluded that `the general standard of the restoration work carried out at Heveningham is sans- factory, and the condition of the Hall is certainly no worse than that of many other Grade I country houses in private own- ership'.

The DoE should have been there when I visited the Hall a few days before its report came out. 'Incongruous, isn't it?', 'Dear, oh dear', 'The details are all wrong', and 'I feel totally incensed' were just a sample of the almost universally derogatory com- ments I heayd as I walked round. The whole effect was shoddy, and it came as lithe surprise earlier this month when it was revealed that receivers acting for the United Bank of Kuwait had moved in on the house, seeking redress for a £3 million mortgage taken out by Mr al- Ghazzi. The mortgage had not been paid since last December.

Where then were the fabled riches of the Arab who was recommended to Mr Hesel- tine by his fellow minister Sir Ian Gilmour? Although Mr al-Ghazzi unfortunately died of a massive heart-attack in March, the unhappy saga raises questions not just about the Government's stewardship of our national heritage but also about the role of a number of prominent Conserva- tive politicians who were Mr al-Ghazzi's business associates. Among these are party chairman Chris Patten, who was a director (sometime managing director) of Mr al- Ghazzi's flagship Gulf Development Cor- poration at the time of the transaction.

Al-Ghazzi first came to Britain in the late 1960s, with a reputation as a middle- man in the oil trade. He had brokered profitable deals between Western com- panies and Arab rulers. By all accounts a charming fellow, he set up the Gulf De- velopment Corporation (GDC) in-London to `act as marketing consultants for over- seas governments', mainly to the Middle East. One of GDC's first directors was the late Lord Thomson of Fleet. Also in at the beginning were al-Ghazzi's solicitor, Lord Chelmer, who was treasurer of the Con- servative Party from 1965 to 1977, and Dennis (now Sir Dennis) Walters, the Arabophile Conservative MP. In 1980, shortly after the DoE had announced that Heveningham Hall was to be sold privately, GDC raised its capital from a modest £100 (£1 of which was and may still be — held by Lord Chelmer) to £250,000. At the time the company's directors were Lord Chelmer, Chris Patten and, another Conservative MP, Sir Timothy Kitson. Patten had taken over from Sir Ian Gilmour, the former Defence Secretary, when the latter was appointed Lord Privy Seal in May 1979.

Sir Ian returned to the GDC board in January 1982, shortly after he had left ministerial office. This time he was co- chairman (with LOrd Chelmer). Patten remained a director (in the 1982 accounts he is described as managing director) until he resigned in June 1983, following his first hitch up the greasy pole as Parliamentary Under-Secretary in the Northern Ireland office.

So what is the significance of all this? Just because you're on a board with somebody does not mean you are responsi- ble for his property transactions, surely? This indeed is the line that Gilmour, Patten and Walters have taken when asked about Heveningham. Yes, they sat on the GDC board but, no, that had nothing to do with the Hall, which was run by al-Ghazzi personally and financed through ID Invest- ment Development. Patten, for example, has said emphatically he was not involved in either the purchase or management of the house.

So there must have been another good business reason for the dramatic increase in GDC's capital in 1980. Nevertheless, the more substantial sum cannot have failed to impress the DoE.

Rather stranger is the fact that in May 1981, six months before Michael Heseltine authorised the sale of Heveningham, GDC spawned a wholly-owned subsidiary, Dreamgale, which in October that year changed its name to Gulfpark Property Management Limited (GPM), a company which was stated in its 1982 accounts to have entered a commercial agreement to `develop the Hall [Heveninghamj for the purpose of obtaining income for the owner and itself . That same year, when Patten was managing director, GDC stated in its annual report that, as well as acting as `marketing consultants for overseas gov- ernments', it was involved in 'stately home management in the United Kingdom'.

In fact, the subsidiary, GPM, appears to have done little else but run and (spasmo- dically) restore the Hall. For three years one share in it was held by-GDC, another by an entity described in the records at Companies House as Gulf Development (UAE) of Sharjah. In 1984 the GDC share was transferred to the Sharjah company.

It is surprising that Mr Patten is able to say he had nothing to do with Hevening- ham, if the company of which he was managing director owned a subsidiary which oversaw the running of the Hall and operated out of the same Park Lane property as GDC. Nevertheless, Sir De- nnis Walters insists that GPM never 'im- pinged on the work of GDC', and Lord Chelmer has recently said that only a clerical mistake led GPM to be listed at Companies House as a subsidiary of GDC. Phew! So GDC and its directors never intended to profit, even indirectly, from a house which had been sold by the Govern- ment to a mysterious Arab. What a relief! But however suitable — as Sir Ian Gilmour continues to profess — Mr al- Ghazzi was at the time, the Arab's business empire was always a mystery. Take the aforementioned Gulf Development (UAE) of Sharjah. The Sharjah Chamber of Commerce does not appear to know of it. Mr al-Ghazzi clearly managed to con- vince the DoE that his Glaris-based ID Investment Development was financially solid enough to take on the commitment of restoring the Hall. But that, too, is now in financial difficulties.

What exactly was the DoE thinking when it sold the Hall to this curious, financial entity? Because ID Investment Development's shares are held in bearer form, not even the receivers know who owns them now. According to its suppor- ters, Heveningham is therefore the only major country house whose ultimate be- neficial ownership is unclear. The depart- ment did itself a disservice when, first, it failed to ensure Mr Al-Ghazzi kept to his commitments and then tried to convince enquirers that everything was just fine. Its recently commissioned report on Heve- ningham does little to establish the true position.

By a curious twist of fate, Michael Heseltine is back in the same ministerial post he held in 1981. If he does not want his own reputation damaged by this sorry tale, he should exercise the Government's right of first refusal and repurchase the house for the nation — if, as seems likely, the receivers will have to sell it. Then he, should order a full-scale inquiry into the whole transaction, as Labour environment spokesmen are beginning to suggest. As the story of the Al-Fayeds and Harrods has shown, the Government does not seem to be very successful at tracking the source of apparent Middle Eastern wealth.