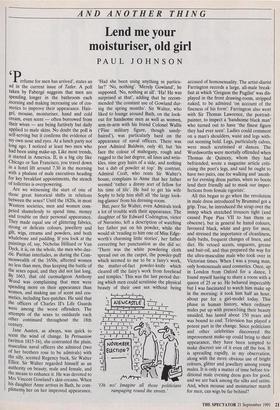 Lend me your moisturiser, old girl

Perfume for men has arrived', states an ad in the current issue of Tatler. A poll taken by Faberge suggests that men are spending, longer in the bathroom each ,morning and making increasing use of cos- metics to improve their appearance. Hair- gel, mousse, moisturiser, hand and cold cream, even scent — often borrowed from their wives — are being furtively but daily applied to male skins. No doubt the poll is self-serving but it confirms the evidence of my own nose and eyes. At a lunch party not long ago, I noticed at least two men who had been using make-up. Like most trends, it started in America. If, in a big city like Chicago or San Francisco, you travel down in a hotel lift around 7.30 in the morning with a phalanx of male executives heading for key breakfast appointments, the stench of toiletries is overpowering.

Are we witnessing the start of one of those great historical shifts in relations between the sexes? Until the 1820s, in most Western societies, men and women com- peted shamelessly to spend time, money and trouble on their personal appearance. They made equal use of glittering fabrics, strong or delicate colours, jewellery and gilt, wigs, creams and powders, and both whalebone and padding. If you look at the paintings of, say, Nicholas Hilliard or Van Dyck, it is, on the whole, the men who daz- zle. Puritan interludes, as during the Com- monwealth of the 1650s, affected women no less than men, thus keeping the battle of the sexes equal, and they did not last long. By 1663, that old curmudgeon Anthony Wood was complaining that men were spending more on their appearance than Women, and making use of scent and cos- metics, including face-patches. He said that the officers of Charles II's Life Guards were among the worst offenders. The attempts of the sexes to outdazzle each other continued throughout the 18th century.

Jane Austen, as always, was quick to scent the wind of change. In Persuasion (written 1815-16), she contrasted the plain, masculine naval officers she admired (two of her brothers rose to be admirals) with the silly, scented Regency buck, Sir Walter Elliot. Sir Walter regarded himself as an authority on beauty, male and female, and the means to enhance it. He was devoted to Mrs Vincent Gowland's skin-creams. When his daughter Anne arrives in Bath, he com- pliments her on her improved appearance. `Had she been using anything in particu- lar?"No, nothing'. 'Merely Gowland', he supposed. 'No, nothing at all'. 'Hal He was surprised at that', adding that he recom- mended 'the constant use of Gowland dur- ing the spring months'. Sir Walter, who liked to lounge around Bath, on the look- out for handsome men as well as women, arm-in-arm with his friend Colonel Wallis (Tine military figure, though sandy- haired'), was particularly hard on the appearance of naval officers. There was poor Admiral Baldwin, only 40, but 'his face the colour of mahogany, rough and rugged to the last degree, all lines and wrin- kles, nine grey hairs of a side, and nothing but a dab of powder at top'. By contrast, Admiral Croft, who rents Sir Walter's house, complains to Anne that her father seemed 'rather a dressy sort of fellow for his time of life'. He had to get his wife Sophy to help him shift all 'the large look- ing-glasses' from his dressing-room.

But, pace Sir Walter, even Admirals took a lot of trouble with their appearance. The daughter of Sir Edward Codrington, victor of Navarino, left a description of watching her father put on his powder, while she would sit 'reading to him one of Miss Edge- worth's charming little stories', her father correcting her punctuation as she did so: `There was the white powdering cloth spread out on the carpet, the powder-puff which seemed to me to be a fairy's work, the matter-of-fact powder-knife which cleared off the fairy's work from forehead and temples.' This was the last period dur- ing which men could scrutinise the physical beauty of their own sex without being `Oh no! Imagine all those politicians rampaging round the streets.' accused of homosexuality. The artist-diarist Farrington records a large, all-male break- fast at which `Gregson the Pugilist' was dis- played in the front drawing-room, stripped naked, to be admired 'on account of the fineness of his form'. Farrington also went with Sir Thomas Lawrence, the portrait- painter, to inspect a 'handsome black man' who turned out to have 'the finest figure they had ever seen'. Ladies could comment on a man's shoulders, waist and legs with- out seeming bold. Legs, particularly calves, were much scrutinised at dances. The Wordsworths were mortally offended when Thomas de Quincey, whom they had befriended, wrote a magazine article criti- cising the poet's legs, and said he ought to have two pairs, one for walking and 'anoth- er for evening dress parties, when no boots lend their friendly aid to mask our imper- fections from female rigorists'.

All this began to go when the revolution in male dress introduced by Brummel got a grip. True, he introduced the strap over the instep which stretched trousers tight (and caused Pope Pius VII to ban them as obscene), but in general he hated colours, favoured black, white and grey for men, and stressed the importance of cleanliness, daily baths, frequent changes of linen, and diet. He vetoed scents, unguents, grease and hair-oil, and thus prepared the way for the ultra-masculine male who took over in Victorian times. When I was a young man, only homosexuals used cosmetics. Once, up in London from Oxford for a dance, I found myself having to share a room with a queen of 25 or so. He behaved impeccably but I was fascinated to watch him make up in the morning: it took him half an hour, about par for a girl-model today. This phase in human history, when ordinary males put up with preseniting their beauty unaided, has lasted about 150 years and was bound to end. Television has played a potent part in the change. Since politicians and other celebrities discovered the improvement make-up could bring to their appearance, they have been tempted to make discreet use of it even off the box. It is spreading rapidly, in my observation, along with the more obvious use of bright colours, glitter and jewellery among young males. It is only a matter of time before tra- ditional male evening dress goes for good, and we are back among the silks and satins. And, when mousse and moisturiser march for men, can wigs be far behind?