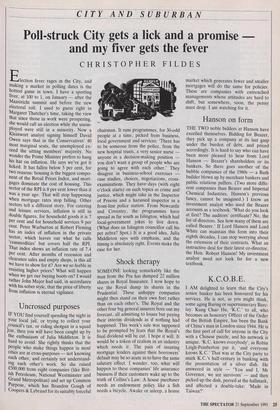 Election fever rages in the City, and making a market in polling dates is the hottest game in town. I have a sporting fiver, at 100 to 1, on January — after the Maastricht summit and before the new electoral roll. I used to guess right in Margaret Thatcher's time, taking the view that since those in work were prospering, she would call an election while the unem- ployed were still in a minority. Now a Kleinwort analyst signing himself David Owen says that in the Conservatives' 40 most marginal seats, the unemployed ex- ceed the sitting members' majority. No wonder the Prime Minister prefers to hang his hat on inflation. He says we've got it licked. It has fallen below 5 per cent, for two reasons: housing is the biggest compo- nent of the Retail Prices Index, and mort- gages dominate the cost of housing. This sector of the RPI is 8 per cent lower than it was a year ago. That will stop happening when mortgage rates stop falling. Other sectors tell a different story. For catering and leisure services, inflation is still in double figures, for household goods it is 7 Per cent and for household services 9 per cent. Peter Warburton at Robert Fleming has an index of inflation in the private sector, which leaves out what he calls `commodities' but covers half the RPI. That index shows an inflation rate of 7.4 per cent. After months of recession and clearance sales and empty shops, is this all we have to show for it? Are we so feeble in resisting higher prices? What will happen when we get our buying boots on? I would rather John Major had said, in accordance with his sober style, that the price of liberty from inflation is eternal vigilance.