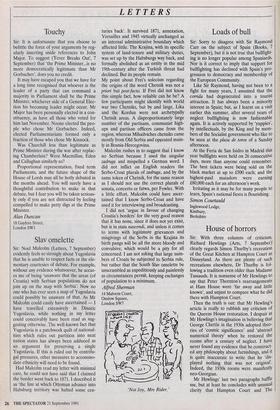 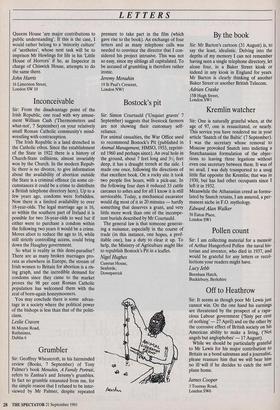 Sir: With three columns of criticism, Richard Hewlings (Arts, 7 September)' clearly regards Simon Thurlby's recreation of the Great Kitchen at Hampton Court as Disneyland. As there are plenty of such recreations elsewhere, Dr Thurlby is fol- lowing a tradition even older than Madame Tussauds. It is nonsense of Mr Hewlings to say that Peter Thornton's rearrangements at Ham House were 'far away and little known', and unjust to compare what he did there with Hampton Court.

Then the truth is out: that Mr Hewling's article is really to rubbish any criticism of the Queens House restoration. I despair at Mr Hewlings's imagination in believing that George Chenle in the 1930s adopted theo- ries of 'cosmic significance' and 'abstract numerical theory' when he restored the rooms after a century of neglect. I have never found any evidence that he construct- ed any philosophy about furnishings, and it is quite inaccurate to write that he 'dis- played nothing that was not original'. Indeed, the 1930s rooms were manifestly neo-Georgian.

Mr Hewlings' last two. paragraphs baffle me, but at least he concludes with unusual clarity that Hampton Court and The

Queens House 'are major contributions to public understanding'. If this is the case, I would rather belong to a 'minority culture' of 'aesthetes', whose next task will be to imprison Mr Hewlings for life in his 'Little House of Horrors' if he, as Inspector in charge of Chiswick House, attempts to do the same there.