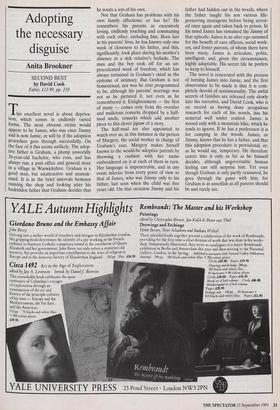 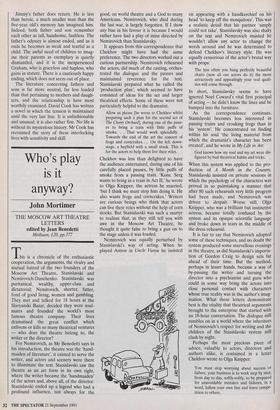 SECOND BEST by David Cook Faber, £13.99, pp. 218 This excellent novel is about depriva- tion, which comes in endlessly varied forms. The most obvious victim would appear to be James, who was once Jimmy and is now Jamie, or will be if the adoption procedure goes through successfully. On the face of it this seems unlikely. The adop- tive father is Graham, a plump unworldly 36-year-old bachelor, who runs, and has always run, a post office and general store in a village in Warwickshire. Graham is a good man, but unattractive and unawak- ened. It is in the brief intervals between running the shop and looking after his bedridden father that Graham decides that

he wants a son of his own.

Not that Graham has problems with his own family affections: or has he? He remembers his parents as excessively loving, endlessly touching and communing with each other, excluding him. Born late in his parents' lives, he has known only one week of closeness to his father, and this, significantly, took place during his mother's absence at a sick relative's bedside. The man and the boy took off for an un- precedented week of freedom, which has always remained in Graham's mind as the epitome of intimacy. But Graham is not homosexual, nor was he ever programmed to be, although his parents' marriage was not as he pictured it, not even as he remembered it. Enlightenment — the first of many — comes only from the overdue and malicious remarks dropped by a half- mad uncle, remarks which add another piece to this clever jigsaw of a story. The half-mad are also appointed to watch over us, in this instance in the person of Margery, the social worker in charge of Graham's case. Margery makes herself known to the would-be adoptive parents by throwing a cushion with her name embroidered on it at each of them in turn. Her language is impenetrable, and in any event inferior from every point of view to that of James, who was Jimmy only to his father, last seen when the child was five years old. On that occasion Jimmy and his father had hidden out in the woods, where the father taught his son various life- preserving stratagems before being arrest- ed once again and taken back to prison. In his mind James has remained the Jimmy of that episode: James is an alter ego assumed for the benefit of care officers, social work- ers, and foster parents, of whom there have been many. James is articulate, polite, intelligent, and, given the circumstances, highly adaptable. His secret life he prefers to keep to himself.

The novel is concerned with the process of turning James into Jamie, and the first observation to be made is that it is com- pletely devoid of sentimentality. The awful secrets of families are released only slowly into the narrative, and David Cook, who is on record as having done scrupulous research for each of his novels, has his material well under control. James is wooed only with a mountain bike, which he tends to ignore. If he has a preference it is for camping in the woods. James, or Jimmy, knows that he has a father, and that this adoption procedure is provisional, or, as he would say, temporary. He therefore enters into it only as far as he himself decides, although ungovernable human feeling can still surprise him. Yet even though Graham is only partly reassured, he goes through the game with him, for Graham is as unselfish as all parents should be and rarely are. Jimmy's father does return. He is less than heroic, a much smaller man than the five-year old's memory has imagined him. Indeed, both father and son remember each other as tall, handsome, faultless. The father's odyssey is almost ended, and as it ends he becomes as weak and tearful as a child. The awful need of children to imag- ine their parents as exemplary is quietly dismantled, and it is the inexperienced Graham, who is graceless and hapless, who gains in stature. There is a cautiously happy ending, which does not seem out of place.

The literature concerning fathers and sons is far more neutral, far less loaded than that pertaining to mothers and daugh- ters, and the relationship is here most worthily examined. David Cook has written a novel in which the tension is maintained until the very last line. It is unfashionable and unusual: it is also rather fine. No life is without its mysterious history. Mr Cook has recounted the story of these interlocking lives with sensitivity and skill.