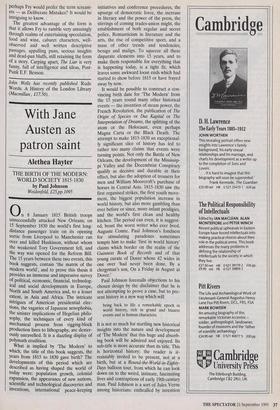 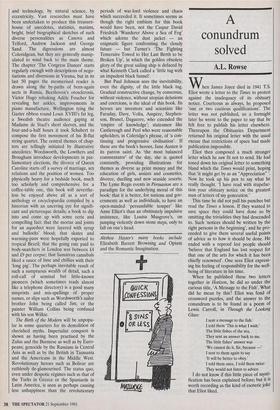 With Jane Austen as patron saint

THE BIRTH OF THE MODERN: WORLD SOCIETY 1815-1830 by Paul Johnson Weidenfeld, £25,pp.1095 On 8 January 1815 British troops unsuccessfully attacked New Orleans; on 15 September 1830 the world's first long- distance passenger train on its opening sortie from Liverpool to Manchester ran over and killed Huskisson, without whom the weakened Tory Government fell, and the way was opened for the Reform Bill. The 15 years between these two events, this book suggests, contain 'the matrix of the modern world', and to prove this thesis it provides an immense and impressive survey of political, economic, financial, technolog- ical and social developments in Europe, North and South America and, to a lesser extent, in Asia and Africa. The intricate intrigues of American presidential elec- tions, the vagaries of Japanese xenophobia, the sinister implications of Hegelian philo- sophy, the techniques of every kind of mechanical process from rigging-block production lines to lithography, are dexter- ously unravelled. It is a &Ming display of polymath erudition.

What is implied by 'The Modern' to which, the title of this book suggests, the years from 1815 to 1830 gave birth? The developments of this period which are described as having shaped the world of today were: population growth, colonial expansion, the appearance of new nations, scientific and technological discoveries and inventions, international peace-keeping initiatives and conference procedures, the upsurge of democratic force, the increase in literacy and the power of the press, the stirrings of coming trades-union might, the establishment of both regular and secret police, Romanticism in literature and the arts, the rise of competitive sport, and a mass of other trends and tendencies, benign and malign. To squeeze all these disparate elements into 15 years, and to make them responsible for everything that is happening today, is a tight fit, which leaves some awkward loose ends which had started to show before 1815 or have frayed away by now.

It would be possible to construct a con- vincing birth date for 'The Modern' from the 15 years round many other historical events — the invention of steam power, the French Revolution, the publication of The Origin of Species or Das Kapital or The Interpretation of Dreams, the splitting of the atom or the Holocaust, even perhaps Magna Carta or the Black Death. The attempt to make 1815-1830 an exceptional- ly significant slice of history has led to rather too many claims that events were turning points. Not only the Battle of New Orleans, the development of the Mississip- pi Valley and the Decembrist Conspiracy qualify as decisive and durable in their effect, but also the adoption of trousers for men and William Moorcroft's purchase of horses in Central Asia. 1815-1830 saw the first organised strikes, the first youth move- ment, the biggest population increase in world history, but also more gambling than ever before or since, more infant prodigies, and the world's first clean and healthy kitchen. The period can even, it is suggest- ed, boast the worst writer who ever lived, Auguste Comte. Paul Johnson's fondness for stimulating paradoxes sometimes tempts him to make 'first in world history' claims which border on the realm of the Guinness Book of Records and of that young curate of Dover whose 42 wides in one over 'had never been done, By a clergyman's son, On a Friday in August at Dover.'

Paul Johnson forestalls objections to his chosen design by the disclaimer that he is not attempting to prove a case, but to pre- sent history in a new way which will

bring back to life a remarkable epoch in world history, rich in grand and bizarre events and in human characters.

It is not so much for startling new historical insights into the nature and development of 'The Modern' that this huge and absorb- ing book will be admired and enjoyed. Its sub-title is more accurate than its title. This is horizontal history; the reader is ir- resistably invited to be present, not at a birth, but at a Round-the-World-in-Eighty- Days balloon tour, from which he can look down on to the weird, intimate, fascinating lives and contraptions of early 19th-century man. Paul Johnson is a sort of Jules Verne among historians: enthralled by invention and technology, by natural science, by eccentricity. Vast researches must have been undertaken to produce this treasure- house of anecdotes, statistics, maxims, bright, brief biographical sketches of such diverse personalities as Canova and Telford, Andrew Jackson and George Sand. The digressions are almost Coleridgean, but they are generally manip- ulated to wind back to the main theme. The chapter 'The Congress Dances' starts regularly enough with descriptions of nego- tiations and diversions in Vienna, but in its last 50 pages the mesmerised reader is drawn along the by-paths of born-again sects in Russia, Beethoven's otosclerosis, Victor Hugo rebuking Adele Foucher for revealing her ankles, improvements in piano manufacture, Wellington tying the Garter ribbon round Louis XVIII's fat leg, a Swedish theatre audience gaping at Madame de Stael's short sleeves, and the four-and-a-half hours it took Schubert to compose the first movement of his B-flat string quartet. The central themes of chap- ters are tellingly initiated by illustrative anecdotes: Wordsworth, the Lowthers and Brougham introduce developments in par- liamentary elections, the divorce of Queen Caroline starts off a survey of marriage, sex relations and the position of women. Too physically heavy for a bedside book, much too scholarly and comprehensive for a coffee-table one, this book will neverthe- less be enjoyed above all as a sort of anthology or encyclopaedia compiled by a historian with an unerring eye for signifi- cant and picturesque details; a book to dip into and come up with some eerie and compelling fact: that the mortar and joints for an aqueduct were layered with syrup and bullocks' blood; that skates and warming-pans were hopefully exported to tropical Brazil; that the going rate paid to body-snatchers in London was between £4 and £9 per corpse; that Sumatran cannibals liked a sauce of lime and chillies with their `long pig'. The perhaps inevitable result of such a sumptuous wealth of detail, such a roll-call of seminal but little-known pioneers (which sometimes reads almost like a telephone directory) is a good many misprints and mis-spellings of proper names, or slips such as Wordsworth's sailor brother John being called Jim, or the painter William Collins being confused with his son Wilkie.

The Birth of the Modern will be unpopu- lar in some quarters for its demolition of cherished myths. Imperialist conquest is shown as having been practised by the Zulus and the Burmese as well as by Euro- peans; genocide by the Russians in Central Asia as well as by the British in Tasmania and the Americans in the Middle West. Revolutionary heroes such as Bolivar are ruthlessly de-glamourised. The status quo, even under despotic regimes such as that of the Turks in Greece or the Spaniards in Latin America, is seen as perhaps causing less unhappiness than the revolutionary periods of war-lord violence and chaos which succeeded it. It sometimes seems as though the right emblem for this book would have been, not the Caspar David Friedrich 'Wanderer Above a Sea of Fog' which adorns the dust jacket — an enigmatic figure confronting the cloudy future — but Turner's 'The Fighting Temeraire Towed to Her Last Berth to be Broken Up', in which the golden obsolete glory of the great sailing ship is defaced by what Kenneth Clark called a 'little tug with an impudent black funnel'.

But Paul Johnson sees the inevitability, even the dignity, of the little black tug. Gradual constructive change, by consensus, without violence, without utopian delusions and coercions, is the ideal of this book. Its heroes are inventors and scientists like Faraday, Davy, Volta, Ampere, Stephen- son, Brunel, Daguerre, who extended the `empire of knowledge'; statesmen like Castlereagh and Peel who were reasonable upholders, in Coleridge's phrase, of 'a con- tinuing and progressive civilisation'. If these are the book's heroes, Jane Austen is its patron saint. As 'the most balanced commentator' of the day, she is quoted constantly, providing illustrations for themes as diverse as prize money and the education of girls, assizes and cosmetics, divorce, duelling and new seaside resorts. The Lyme Regis events in Persuasion are a paradigm for the underlying moral of this book: that it is better, for nations and gov- ernments as well as individuals, to have an open-minded 'persuadable temper' like Anne Elliot's than an obstinately impulsive insistence, like Louisa Musgrove's, on jumping violently down stone steps, only to fall on one's head.

Alethea Hayter's many books include Elizabeth Barrett Browning and Opium and the Romantic Imagination.