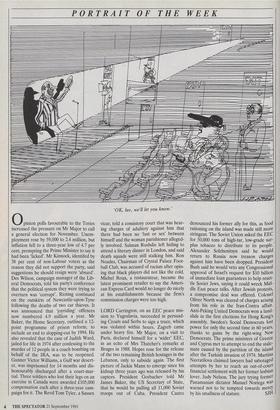 Opinion polls favourable to the Tories increased the pressure on Mr Major to call a general election for November. Unem- ployment rose by 59,000 to 2.4 million, but inflation fell to a three-year low of 4.7 per cent, prompting the Prime Minister to say it had been `licked'. Mr Kinnock, identifed by 38 per cent of non-Labour voters as the reason they did not support the party, said suggestions he should resign were 'absurd'. Des Wilson, campaign manager of the Lib- eral Democrats, told his party's conference that the political system they were trying to overturn was `corrupt'. Rioting continued on the outskirts of Newcastle-upon-Tyne following the deaths of two car thieves. It was announced that 'joyriding' offences now numbered 4.9 million a year. Mr Baker, the Home Secretary, outlined a 12- point programme of prison reform, to include an end to slopping-out by 1994. He also revealed that the case of Judith Ward, jailed for life in 1974 after confessing to the murder of 12 people in a coach bombing on behalf of the IRA, was to be reopened. Gunner Victor Williams, a Gulf war desert- er, was imprisoned for 14 months and dis- honourably discharged after a court-mar- tial. Three soldiers who lost their legs on an exercise in Canada were awarded £105,000 compensation each after a three-year cam- paign for it. The Revd Tom Tyler, a Sussex vicar, told a consistory court that was hear- ing charges of adultery against him that there had been no 'lust or sex' between himself and the woman parishioner alleged- ly involved. Salman Rushdie left hiding to attend a literary dinner in London, and said death squads were still stalking him. Ron Noades, Chairman of Crystal Palace Foot- ball Club, was accused of racism after opin- ing that black players did not like the cold. Michel Roux, a restaurateur, became the latest prominent retailer to say the Ameri- can Express Card would no longer do nicely at his establishments because the firm's commission charges were too high.

LORD Carrington, on an EEC peace mis- sion to Yugoslavia, succeeded in persuad- ing Croats and Serbs to sign a truce, which was violated within hours. Zagreb came under heavy fire. Mr Major, on a visit to Paris, declared himself for a 'wider' EEC, in an echo of Mrs Thatcher's remarks at Bruges in 1988. Hopes rose for the release of the two remaining British hostages in the Lebanon, only to subside again. The first picture of Jackie Mann to emerge since his kidnap three years ago was released by his captors. President Gorbachev told Mr James Baker, the US Secretary of State, that he would be pulling all 11,000 Soviet troops out of Cuba. President Castro denounced his former ally for this, as food rationing on the island was made still more stringent. The Soviet Union asked the EEC for 50,000 tons of high-tar, low-grade sur- plus tobacco to distribute to its people. Alexander Solzhenitsyn said he would return to Russia now treason charges against him have been dropped. President Bush said he would veto any Congressional approval of Israel's request for $10 billion of immediate loan guarantees to help reset- tle Soviet Jews, saying it could wreck Mid- dle East peace talks. After Jewish protests, a compromise deal was offered. Colonel Oliver North was cleared of charges arising from his role in the Iran-Contra affair. Anti-Peking United Democrats won a land- slide in the first elections for Hong Kong's assembly. Sweden's Social Democrats lost power for only the second time in 60 years, thanks to gains by the right-wing New Democrats. The prime ministers of Greece and Cyprus met to attempt to end the stale- mate caused by the partition of the island after the Turkish invasion of 1974. Martina Navratilova claimed lawyers had sabotaged attempts by her to reach an out-of-court financial settlement with her former lesbian lover, Judy Nelson. The jury trying former Panamanian dictator Manuel Noriega was warned not to be tempted towards mercy by his smallness of stature. 510