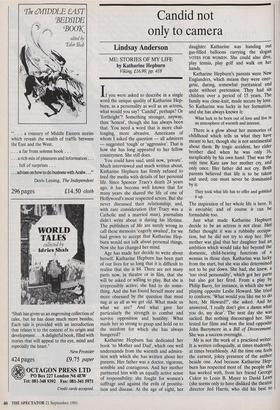 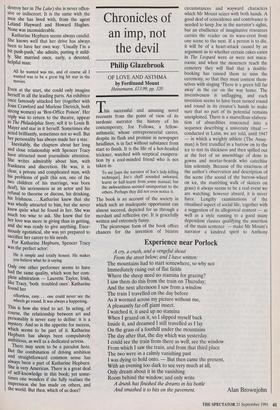 Candid not only to camera

ME: STORIES OF MY LIFE by Katharine Hepburn Viking•, £16.99, pp. 418 If you were asked to describe in a single word the unique quality of Katharine Hep- burn, as a personality as well as an actress, what would you say? 'Candid', perhaps? Or `forthright'? Something stronger, anyway, than 'honest', though she has always been that. You need a word that is more chal- lenging, more abrasive. Americans of whom I asked the question — all admirers — suggested 'tough' or 'aggressive'. That is how she has long appeared to her fellow countrymen. She still does.

You could have said, until now, 'private'. Much interviewed and much written about, Katharine Hepburn has firmly refused to feed the media with details of her personal life. Since Spencer Tracy's death 24 years ago, it has become well known that for many years she shared the life of one of Hollywood's most respected actors. But she never discussed their relationship; and, with rare consideration (for Tracy was a Catholic and a married man), journalists didn't write about it during his lifetime. The publishers of Me are surely wrong to call these memoirs 'eagerly awaited', for we had grown to accept that Katharine Hep- burn would not talk about personal things. Now she has changed her mind.

Age has made her decide to write about herself. Katharine Hepburn has been part of our lives for so long that it is difficult to realise that she is 84. There are not many parts now, in theatre or in film, that she will be asked or willing to play. But she is irrepressibly active; she had to do some- thing. And she has found herself more and more obsessed by the question that must nag at us all as we get old. What made us what we are? And what gave her particularly the strength to combat and survive opposition and hostility. What made her so strong to grasp and hold on to the stardom for which she has always hungered?

Katharine Hepburn has dedicated her book `to Mother and Dad', which one well understands from the warmth and admira- tion with which she has written about her parents. Her father was a doctor, vigorous, sensible and courageous. And her mother partnered him with an equally active sense of responsibility: she fought for women's suffrage and against the evils of prostitu- tion and disease. At the age of eight, her daughter Katharine was handing out gas-filled balloons carrying the slogan VOTES FOR WOMEN. She could also dive, play tennis, play golf and walk on her hands.

Katharine Hepburn's parents were New Englanders, which means they were ener- getic, daring, somewhat puritanical and quite without pretension. They had six children over a period of 15 years. The family was close-knit, made secure by love. So Katharine was lucky in her formation, and she has always known it: What luck to be born out of love and live in an atmosphere of warmth and interest.

There is a glow about her memories of childhood which tells us what they have meant to her, though she is not sentimental about them. By tragic accident, her elder brother died when he was only 16, inexplicably by his own hand. That was the only time Kate saw her mother cry, and only once. Her father did not cry. Both parents believed that life is to be taken and used; one must never be dominated by it:

They took what life has to offer and gobbled it up.

The inspiration of her whole life is here. It is enviable; and of course it can be formidable.too.

Just what made Katharine Hepburn decide to be an actress is not clear. Her• father thought it was a rubbishy occupa- tion, but he did not try to stop her. Her mother was glad that her daughter had all ambition which would take her beyond the domestic, child-bearing functions of a woman in those days. Katharine was lucky from the start, but she was also determined not to be put down. She had, she knew, a `too vivid personality', which got her parts but also got her fired. From a play by Philip Barry, for instance, in which she was playing opposite Leslie Howard. She tried to conform. 'What would you like me to do here, Mr Howard?', she asked. And he answered, 'I really don't give a damn what you do, my dear'. The next day she was sacked. But nothing discouraged her. She tested for films and won the lead opposite John Barrymore in a Bill of Divorcement. She was a success overnight. Me is not the work of a practiced writer. It is written colloquially, at times studently, at times breathlessly. All the time one feels the earnest, jokey presence of the author beside one. And because Katharine Hep- burn has respected most of the people she has worked with, from her friend George Cukor to Louis B. Mayer to David Lean (she seems only to have disliked the theatre director Jed Harris, who did his best to All he wanted was me, and of course all I wanted was to be a great big hit star in the movies.

Even at the start, she could only imagine herself in all the leading parts. An exhibitor once famously attacked her (together with Joan Crawford and Marlene Dietrich, both strong women) as 'Box-Office Poison'. Her reply was to return to the theatre, appear in The Philadelphia Story, sell it to Louis B. Mayer and star in it herself. Sometimes she acted brilliantly, sometimes not so well. But her personality has always made her a star. Inevitably, the chapters about her long and close relationship with Spencer Tracy have attracted most journalistic attention. She writes admirably about him, with frankness and discretion. He was, it is clear, a private and complicated man, with his problems of guilt (his son, one of the two children of his marriage, was born deaf), his seriousness as an actor and his refusal to theorise or discuss, his drinking, his Irishness. .Katharine knew that she was wholly attracted to him, but she never knew quite what he found in her. She was much too wise to ask. She knew that for her love was more in giving than in getting, and she was ready to give anything. Enor- mously egotistical, she was yet prepared to sacrifice her career to his needs.

For Katharine Hepburn, Spencer Tracy was the perfect actor:

He is simple and totally honest. He makes you believe what he is saying.

Only one other performer seems to have had the same quality, which won her com- plete admiration — Laurette Taylor, Irish, like Tracy, 'both troubled ones'. Katharine found her

effortless, easy. . . one could never see the wheels go round. It was always a happening.

This is how she tried to act. In acting, of course, the relationship between art and Personality is never easy to define: it is a mystery. And so is the appetite for success, which seems to be part of it. Katharine Hepburn has always been compulsively ambitious, as well as a dedicated actress.

There may seem to be a paradox here. But the combination of driving ambition and straightforward common sense has always been a part of Katharine Hepburn. She is very American. There is a great deal of self-knowledge in this book; yet some- times one wonders if she fully realises the impression she has made on others, and the world. But then, which of us does? destroy her in The Lake) she is never offen- sive or indiscreet. It is the same with the men she has lived with, from the agent Leland Hayward and Howard Hughes. None was inconsiderable.

Katharine Hepburn seems always candid. She knows well that her drive has always been to have her own way. 'Usually I'm a bit push-push,' she admits, putting it mild-