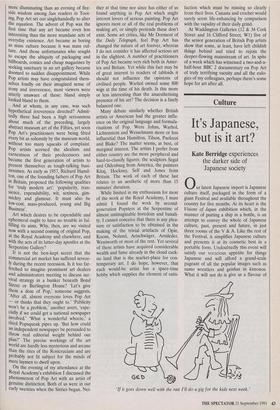 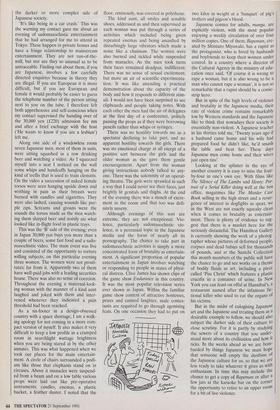 It's Japanese, but is it art?

Kate Berridge experiences the darker side of Japanese society 0 ur latest Japanese import is Japanese culture itself, packaged in the form of a giant Festival and available throughout the country for five months. At its heart is the Visions of Japan exhibition which, in the manner of putting a ship in a bottle, is an attempt to convey the whole of Japanese culture, past, present and future, in just three rooms of the V & A. Like the rest of the Festival, it simplifies Japanese culture and presents it at its cosmetic best in a portable form. Undoubtedly this event will satisfy our voracious appetite for things Japanese and will afford a grand-scale pageant of all the popular images such as sumo wrestlers and geishas in kimonos. What it will not do is give us a flavour of

the darker or more complex side of Japanese society.

`It's like being in a car crash.' This was the warning my contact gave me about an evening of sadomasochistic entertainment that he had arranged for me to attend in Tokyo. These happen in private homes and have a fringe relationship to mainstream entertainment. They are not run-of-the- mill, but nor are they so unusual as to be untraceable. Finding out about them, if you are Japanese, involves a few carefully directed enquiries because in theory they are illegal. If you are European it is more difficult, but if you are European and female it would probably be easier to guess the telephone number of the person sitting next to you on the tube. I therefore felt both apprehensive and self-conscious when my contact supervised the handing over of the 30,000 yen (£220) admission fee nm and after a brief exchange with the host (1-le wants to know if you are a lesbian') left me.

Along one side of a windowless room seven Japanese men, most of them in suits, were sitting squashed in a row drinking beer and watching a video. As I squeezed myself into a seat I noticed on the wall some whips and handcuffs hanging on the kind of trellis that is used to train clematis. On the video a succession of naked female torsos were seen hanging upside down and writhing in pain as their breasts were burned with candles and cigarettes. They were also lashed, causing wounds like pur- ple zips. Screams and groans were the sounds the torsos made as the men watch- ing them slurped beer and noisily ate what looked like in-flight food in plastic trays.

This was the '13' side of the evening; even in Japan 30,000 yen buys you more than a couple of beers, some fast food and a sado- masochistic video. The main event was live and consisted of the opportunity to torture willing subjects, on this particular evening three women. The women were not prosti- tutes; far from it. Apparently two of them have well-paid jobs with a leading securities house. There was also no sense of coercion. Throughout the evening a maternal-look- ing woman with the manner of a kind aunt laughed and joked with them and inter- vened whenever they indicated a pain threshold had been reached.

As a six-footer in a design-obsessed country with a space shortage, I am a walk- ing apology for not coming in a more com- pact version of myself. It also makes it very difficult to keep a low profile in a cramped room in searchlight wattage brightness when you are being stared at by the other inmates. This was what happened when we took our places for the main entertain- ment. A circle of chairs surrounded a podi- um like those that elephants stand on in circuses. Above it manacles were suspend- ed from a beam and on a low table various props were laid out like pre-operative instruments: candles, enemas, a plastic bucket, a feather duster. I noted that the floor, ominously, was covered in polythene.

The kind aunt, all smiles and sensible shoes, addressed us and then supervised as each woman was put through a series of activities which included being given repeated enemas and being assaulted by disturbingly large vibrators which made a noise like _a chainsaw. The women were also burned and tickled while suspended from manacles. As the men took turns their faces remained deadpan, indifferent. There was no sense of sexual excitement, but more an air of scientific experimenta- tion. It was like attending a practical demonstration about the capacity of the body and how it responds to different stim- uli. I would not have been surprised to see clipboards and people taking notes. With each other the men had the air of delegates at the first day of a conference, politely passing the props as if they were borrowing pencils rather than whips or syringes.

There was no hostility towards me as a spectator declining to take part, and no apparent hostility towards the girls. There was no emotional charge at all except of a positive' sort between the girls 'and the older woman as she gave them gentle encouragement. Apart from the woman giving instructions nobody talked to any- one. There was the solemnity of an operat- ing theatre. The girls were sprawled in such a way that I could never see their faces, just brightly lit genitals and thighs. At the end of the evening there was a stench of excre- ment in the room and that too was defi- nitely unsexy.

Although evenings of this sort are extreme, they are not exceptional. Vio- lence, particularly sadomasochistic- vio- lence, is a perennial topic in the Japanese media and the focus of nearly all its pornography. The chance to take part in sadomasochistic activities is simply a more concentrated form of brutality as entertain- ment. A significant proportion of popular entertainment in Japan involves watching or responding to people in states of physi- cal distress. Clive James has shown clips of the game show Endurance in this country. It was the most popular television series ever shown in Japan. Within the familiar game show context of attractive hostesses, prizes and canned laughter, male contes- tants are required to go through agonising feats. On one occasion they had to put on

two kilos in weight at a 'banquet' of pig's trotters and pigeon's blood.

Japanese comics for adults, manga, are explicitly violent, with the most popular enjoying a weekly circulation of over four million copies. One of them, Rapeman, cre- ated by Shintaro Miyawaki, has a rapist as the protagonist, who is hired by husbands and boyfriends to keep their women under control. In a country where a director of the Cultural Agency in the ministry of edu- cation once said, 'Of course it is wrong to rape a woman, but it is also wrong to be a man who cannot rape a woman', it is not so remarkable that a rapist should be a comic- strip hero.

But in spite of the high levels of violence and brutality in the Japanese media, their rate of violent crime remains remarkably low by Western standards and the Japanese like to think that nowadays their society is essentially non-violent. A Japanese teacher in his thirties told me, 'Twenty years ago if a husband came home and his wife had prepared food he didn't like, he'd smash the table and beat her. These days Japanese men come home and their wives just open tins'.

Looking at the splinter in the eye of another country it is easy to miss the four- by-four in one's own eye. With films like The Silence of The Lambs and Henry: Por- trait of a Serial Killer doing well at the box office, magazines like S The Murder Case Book selling in the high street and a resur- gence of interest in dogfights as sport, we in the West are not exactly squeaky clean when it comes to brutality as entertain- ment. There is plenty of evidence to sug- gest that there is a market here for the seriously distasteful. The Hamilton Gallery is currently showing the work of a photog- rapher whose pictures of deformed people, corpses and dead babies sell for thousands of pounds, and at the Saatchi Collection this month members of the public will have the chance to go and see works on a theme of bodily fluids as art, including a piece called 'Piss Christ' which features a plastic crucifix in a container of urine. In New York you can feast on offal at Hannibal's, a restaurant named after the infamous fic- tional killer who used to eat the organs of his victims.

But in the midst of eulogising Japanese art and the Japanese and treating them as a desirable example to follow, we should also subject the darker side of their culture to close scrutiny. For it is partly by studying the sewers of a country that you under- stand more about its civilisation and how it ticks. In the weeks ahead as we are bom- barded by things Japanese we must hope that someone will empty the dustbins of the Japanese culture for us, so that we are less ready to take whatever it gives us with enthusiasm. In time this may include the chance to get a copy of Rapeman or after a few jars at the karaoke bar on the corner the opportunity to retire to an upper room for a bit of live violence.