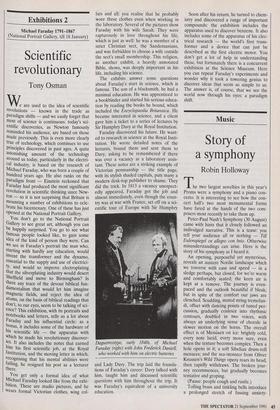 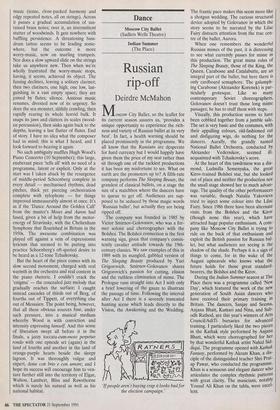 Story of a symphony

The two largest novelties in this year's Proms were a symphony and a piano con- certo. It is interesting to see how the con- cert hall's two most monumental forms have fared at the hands of the two com- posers most recently to take them up.

Peter-Paul Nash's Symphony (30 August) came with hints that it closely followed an indivulged narrative. This is a tease: you tell your audience all or nothing — Till Eulenspiegel or allegro con brio. Otherwise misunderstandings can arise. Here is the story of his symphony as I heard it.

An opening, purposeful yet mysterious, reveals an austere Nordic landscape which we traverse with ease and speed — in a sledge perhaps, but closed, for we're warm and comfortably seated; the keen air is kept at a remove. The journey is even- paced and the outlook beautiful if bleak; but in spite of the comfort our jaws are clenched. Scudding, muted string tremolan- di, offset with dancing points of tuned per- cussion, gradually coalesce into rhythmic contours, doubled in two voices, with always an underlying sense of chorale in slower motion on the horns. The overall effect is of Messiaen on ice: brightly cold, every note lucid, every move sure, even when the texture becomes complex. Then a hole opens in it; a soft Sibelian drum-roll menaces; and the sea-monster from Oliver Knussen's Wild Things opera rears its head, then rapidly withdraws. The broken jour- ney recommences, but gradually becomes tentative and groping.

(Pause: people cough and rustle.) Tolling brass and tinkling bells introduce a prolonged stretch of fussing anxiety- music (tense, close-packed harmony and edgy repeated notes, all on strings). Across it passes a gradual accumulation of sus- tained brass notes; over it, an intermittent stutter of woodwinds. It gets nowhere with baffling persistence. A threatening bass- drum tattoo seems to be leading some- where, but the outcome is more worry-music, now on snarling trumpets. Nor does a slow upward slide on the strings take us anywhere new. Then when we're wholly frustrated the worry-music stops, having, it seems, achieved its object. The fussing declines, leaving a solitary clarinet; then two clarinets, one high, one low, lan- guishing in a vast empty space; they are joined by flutes; silence. Anxious music resumes, divested now of its urgency. So does the sea-monster, slithily crawling, then rapidly rearing its whole horrid bulk. It snaps its jaws and clatters its scales (wood- en percussion), then sinks again back to the depths, leaving a last flutter of flutes. End of story. I have no idea what the composer had in mind; this is what I heard, and I look forward to hearing it again.

No such ambiguity muffles Hugh Wood's Piano Concerto (10 September); this large, exuberant piece 'tells all' with no need of a programme, latent or explicit. Only at the start was I taken aback by the resurgence of middle-period Schoenberg complete in every detail — mechanised rhythms, dead pitches, thick yet piercing orchestration complete with xylophone — for things improved immeasurably almost at once. It's as if the 'Dance Around the Golden Calf' from the master's Moses and Aaron had fused, given a bit of help from the motor- energy of Stravinsky, with the Cheltenham Symphony that flourished in Britain in the 1950s. The awesome combination was played off against a vein of expressionist lyricism that seemed to be putting into practice Schoenberg's oft-quoted desire to be heard as a 12-tone Tchaikovsky.

But the heart of the piece comes with its slow second movement, charged with real warmth in the orchestra and real content in the piano rhetoric. I couldn't crack the `enigma' — the concealed jazz melody that gradually reaches the surface; I caught instead cascades of thirds out of Berg, of fourths out of Tippett, of everything else out of Messaien. The point being, however, that all these obvious sources fuse, under such pressure, into a musical medium whereby Wood is with conviction and intensity expressing himself. And this sense of liberation swept all before it in the finale, a jazzy toccata-cum-moto perpetuo rondo with one episode set (again) in the land of fourths and another in the land of orange-purple hearts beside the sleepy lagoon. It was thoroughly vulgar and expert, done con brio e con amore; and I hope its success will encourage him to ven- ture further still into the territory of Elgar, Walton, Lambert, Bliss and Rawsthorne which is surely his natural as well as his national habitat.