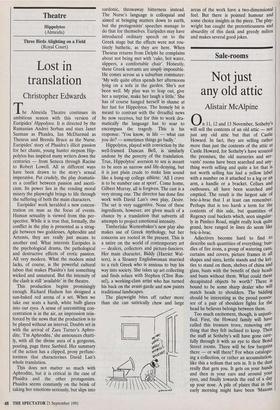 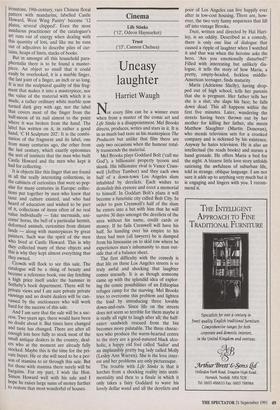 Not just any old attic

On 11, 12 and 13 November, Sotheby's will sell the contents of an old attic — not just any old attic but that of Castle Howard. In fact, they are selling rather more than just the contents of the attic at Castle Howard, for Sotheby's have scoured the premises, the old nurseries and ser- vants' rooms have been searched and any- thing worth selling and quite a lot that is not worth selling has had a yellow label with a number on it attached to a leg or an arm, a handle or a bracket. Cellars and outhouses, all have been searched and emptied. The result is the largest sale of bric-à-brac that I at least can remember. Perhaps that is too harsh a term for the contents of this sale, but quantities of Regency coal buckets which, seen singular- ly in Pimlico Road, might really look quite grand, here ranged in lines do seem like bric-à-brac.

Adjectives become hard to find to describe such quantities of everything: bum dies of fire irons, a group of watering cans, curtains and covers, picture frames in all shapes and sizes, kettle stands and the ket- tles to stand on them, shelves of china and glass, busts with the benefit of their heads and busts without them. What could these decapitated objects be worth? There is bound to be some sharp dealer who will match heads to shoulders. The bidding should be interesting as the proud posses- sor of a pair of shoulders fights for the head he believes belongs between them.

Too much excitement, though, is unjusti- fied. First, the Howard family will have culled this treasure trove, removing anY- thing that they felt inclined to keep. Then the staff at Sotheby's will have gone care- fully through it with an eye to their Bond Street rooms. There will be few bargains there — or will there? For when catalogu- ing a collection, or rather an accumulation, like this a tedium that sets in. It is the dust really that gets you. It gets on your hands and then in your ears and around your eyes, and finally towards the end of a day up your nose. A pile of plates that in the early morning might have been 'Masons ironstone, 19th-century, rare Chinese floral pattern with mandarins, labelled Castle Howard, West Wing Pantry' become '12 plates, several chipped'. Even the most assiduous practitioner of the cataloguer's art runs out of energy when dealing with this quantity of lots, and like me he runs out of adjectives to describe piles of cur- tains, heaps of linen, stacks of books.

But in amongst all this household para- phernalia there is to be found a master- piece. An object so small that it could easily be overlooked, it is a marble finger, the last joint of a finger, an inch or so long. It is not the sculptural quality of this frag- ment that makes it into a masterpiece, nor the value of the material with which it is made, a rather ordinary white marble now turned dark grey with age, nor the label that covers most of the finger from the half-moon of its nail almost to the point where it was broken from the hand. The label has written on it, in rather a good hand, `C H Sculpture 202'. It is the combi- nation of the fragment and its label, one from many centuries ago, the other from the last century, which exactly epitomises the sort of instincts that the man who built Castle Howard and the men who kept it had for collecting. It is objects like this finger that are found in all the really interesting collections, in the cabinets of curiosities that were so pop- ular for many centuries in Europe: collec- tions put together by men who knew that taste and culture existed, and who had heard of education and wished to be part of it, collections of items often of no real value individually — fake mermaids, uni- corns' horns, the bell of a particular hermit, deformed animals, curiosities from distant lands — along with masterpieces by great painters. Such was the spirit of the men who lived at Castle Howard. This is why they collected many of these objects and this is why they kept almost everything that they owned.

Crowds will flock to see this sale. The catalogue will be a thing of beauty and become a reference book, one day fetching a high price itself under the hammer in Sotheby's book department. There will be Private views and I am sure private private viewings and no doubt dealers will be can- vassed by the auctioneers who will work hard for the success of this sale.

And I am sure that the sale will be a suc- cess. Two years ago, there would have been no doubt about it. But times have changed and taste has changed. There are after all enough lots here fully to stock most of the small antique dealers in the country, deal- ers who at the moment are already fully stocked. Maybe this is the time for the pri- vate buyer. He or she will need to be a per- son of stamina to sit through this sale. But for those with stamina there surely will be bargains. For my part, I wish the Hon. Simon Howard well with his sale and I hope he raises large sums of money further to restore that most wonderful of houses.