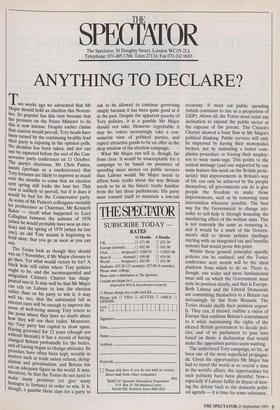 T" weeks ago we advocated that Mr Major should hold an election this Novem- ber. So popular has this view become that the pressure on the Prime Minister todo this is now intense. Despite earlier claims that caution would prevail, Tory heads have been turned by the continuing healthy lead their party is enjoying in the opinion polls. No decision has been taken, and nor can one be expected before the end of the Con- servative party conference on 11 October. The party's chairman, Mr Chris Patten, insists (perhaps as a smokescreen) that Tory fortunes are likely to improve so much over the months to come that an election next spring still looks the best bet. This view is unlikely to prevail, but if it does it would be bad for the Conservative party. As some of Mr Patten's colleagues—inotably his predecessor as Chairman, Mr Kenneth Baker — recall what happened to Lord Callaghan between the autumn of 1978 (when he would probably have won an elec- tion) and the spring of 1979 (when he lost one), an old Tory maxim is beginning to hold sway: that you go as soon as you can

The Tories look as though they should win on 7 November, if Mr Major chooses to go then. Yet what would victory be for? A black hole still exists where Tory policies Ought to be, and the inconsequential and misguided Citizen's Charter has disap- peared into it. It may well be that Mr Major can rely on Labour to lose the election rather than on his party to win it; it may well be, too, that the substantial fall in interest rates will be enough to improve the sense of well-being among Tory voters to the point where they have no doubt about how they will use their ballot. Moreover, the Tory party has capital to draw upon. Having governed for 12 years (though not without blemish) it has a record of having changed Britain profoundly for the better, and of having begun to change attitudes. Its promises have often been kept, notably in matters such as trade union reform, dereg- ulation and privatisation, and Britain has cut an adequate figure in the world. It may, therefore, be that the Tories do not need to make many promises (or give many hostages to fortune) in order to win. It is, though, a gamble these days for a party to ask to be allowed to continue governing simply because it has been quite good at it in the past. Despite the apparent paucity of Tory policies, it is a gamble Mr Major should not take. However regrettable it may be, voters increasingly take a con- sumerist view of political parties, and expect attractive goods to be on offer in the shop window of the election campaign. What Mr Major can sell is, though, far from clear. It would be unacceptable for a campaign to be based on promises of spending more money on public services than Labour would. Mr Major needs to affirm basic truths about the way Britain needs to be in the future, truths familiar from the last three parliaments. His party must commit itself to maintain a low-tax economy. It must cut public spending (which continues to rise as a proportion of GDP). Above all, the Tories must resist any inclination to expand the public sector at the expense of the private. The Citizen's Charter showed a basic flaw in Mr Major's political thinking. Public services will only be improved by having their monopolies broken, not by instituting a better com- plaints procedure or forcing their employ- ees to wear name-tags. This points to the central message (and one supported by our main feature this week on the British prole- tariat): that improvements in Britain's way of life can only be achieved by the people themselves; all governments can do is give people the freedom to make those improvements, such as by removing state intervention wherever possible. The best way for the Government to change atti- tudes to self-help is through lessening the smothering effect of the welfare state. This is not remotely the same as removing it, and it would be a mark of the Govern- ment's skill to devise policies (perhaps starting with an integrated tax and benefits system) that would prove this point.

Within these general principles specific policies can be outlined, and the Tories' conference next month will be the ideal platform from which to do so. There is, though, one wider and more fundamental issue still on which the Government must state its position clearly, and that is Europe. Both Labour and the Liberal Democrats are committing themselves to a Britain run increasingly by fiat from Brussels. The Tories should clarify their position urgent- ly. They can, if shrewd, outline a vision of Europe that confirms Britain's commitment to it while maintaining the rights of the elected British government to decide poli- cies, and of its parliament to pass laws based on them; a declaration that would make the opposition parties seem wanting.

The undeclared Tory campaign, so far, as been one of the most superficial propagan- da. Given the opportunities Mr Major has had to travel the world at so crucial a time in the worlds affairs, the opportunities for such publicity have been plentiful. Now— especially if Labour fulfils its threat of mov- ing the debate back to the domestic politi- cal agenda — it is time for some substance.