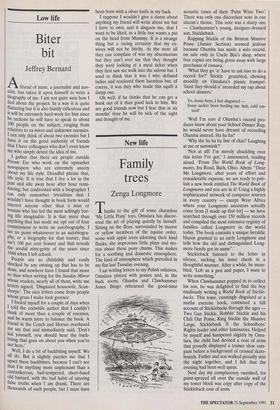 Afriend of mine, a journalist and nov- elist, has taken it upon himself to write a biography of me. I am not quite sure how I feel about the project. In a way it is quite flattering but it is also faintly ridiculous and it will be extremely hard work for him since he reckons he will have to speak to about 100 people on the subject, ranging from relatives to ex-wives and unknown enemies. I can only think of about two enemies but I have it on the good authority of friends that I have colleagues who don't even know me who simply detest the idea of me. I gather that there are people outside Private Eye who work on the upmarket newspapers who are extremely snooty about my life style. Dreadful phrase that, life style. It is true that I live a lot in the past and idle away hour after hour remi- niscing, but confronted with a biographer I can only remember trivialities that I wouldn't have thought in book form would Interest anyone other than a man or woman who has led the most achingly bor- ing life imaginable. It is that more than anything that has made me opt out of four Commissions to write an autobiography. I see no point whatsoever in an autobiogra- phy, or a biography for that matter, that Isn't 100 per cent honest and that reveals the sordid nitty-gritty of the years since 1948 when I left school.

People are so childishly and easily shocked by any owning up that has to be done, and nowhere have I found that more so than when writing for the Sunday Mirror whose readers, nearly all of them, write me letters signed, 'Disgusted housewife, Scun- thorpe'. The nice letters come from people whose grass I make look greener. I fooled myself for a couple of days when I told the erstwhile author that I couldn't think of more than a couple of enemies, and he wants more to balance the book. A friend in the Coach and Horses overheard me say that and immediately said, 'Don't kid yourself, you should hear the back- biting that goes on about you when you're not here.'

Well, I do a bit of backbiting myself. We all do. But it slightly puzzles me that I upset these backbiters, because I can't see that I'm anything more unpleasant than a cantankerous, bad-tempered, short-fused old bastard, with the bad habit of uttering false truths when I am drunk. There are thousands of such people, but I must have been born with a silver knife in my back.

I suppose I wouldn't give a damn about anything my friend will write about me but I have to own, and it disgusts me, that I want to be liked, as a little boy wants a pat on the head from Mummy. It is a strange thing but a racing certainty that my ex- wives will not be bitchy. At the most all they can complain of was my absenteeism but they can't ever say that they thought they were looking at a meal ticket when they first saw me walk into the saloon bar. I used to think that it was I who defused ladies and rendered them harmless but, of course, it was they who made this squib a damp one. Oh well, if he thinks that he can get a book out of it then good luck to him. We are good friends now but I fear that in six months' time he will be sick of the sight and thought of me.