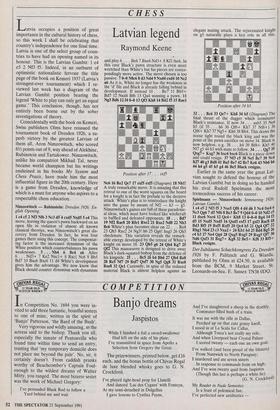 Latvia occupies a position of great importance in the cultural history of chess, so this week 1 shall be celebrating that country's independence for one final time. Latvia is one of the select group of coun- tries to have had an opening named in its honour. This is the Latvian Gambit: 1 e4 e5 2 Nf3 f5. Indeed, in an outburst of optimistic nationalistic fervour the title page of the book on Kemeri 1937 (Latvia's strongest-ever tournament) which I re- viewed last week has a diagram of the Latvian Gambit position bearing the legend 'White to play can only get an equal game.' This conclusion, though, has not entirely been borne out by the sober investigations of theory.

Coincidentally with the book on Kemeri, Swiss publishers Olms have reissued the tournament book of Dresden 1926, a su- perb victory by the greatest Latvian of them all, Aron Nimzowitsch, who scored 81/2 points out of 9, way ahead of Alekhine, Rubinstein and Tartakower. Nimzowitsch, unlike his compatriot Mikhail Tal, never became world champion but his writings enshrined in his books My System and Chess Praxis, have made him the most influential figure in the 20th century. Here is a game from Dresden, knowledge of which is a must for anyone who aspires to a respectable chess education.

elegant mating attack. The rejuvenated knight on g5 naturally plays a key role in all this.

Earlier in the same year the great Lat- vian sought to defend the honour of the Latvian Gambit but in doing so he handed his rival Rudolf Spielmann the most tremendous success of his career: