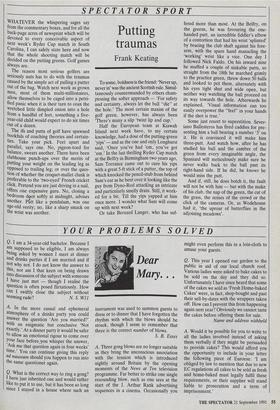 WHATEVER the whispering sages say from the commentary boxes, and for all the back-page acres of newsprint which will be devoted to every conceivable aspect of next week's Ryder Cup match in South Carolina, I can safely state here and now that the whole shooting match will be decided on the putting greens. Golf games always are.

The reason most serious golfers are seriously nuts has to do with the traumas caused by the simple act of pulling a putter out of the bag. Watch next week as grown men, most of them multi-millionaires, allow themselves to be caged into a petri- fied panic when it is their turn to coax the wretched little dimpled onion into a hole from a handful of feet, something a five- year-old child would expect to do six times out of a dozen.

The ifs and putts of golf have spawned bookfuls of coaching theories and certain- ties. Take your pick. Feet apart and parallel, says one. No, pigeon-toed for balance, swears another. There have been clubhouse punch-ups over the merits of putting your weight on the leading leg as opposed to trailing leg; or over the ques- tion of whether the croquet-mallet clunk is preferable to the 'two-eyed' French cricket click. Pretend you are just driving in a nail, offers one expensive guru. No, closing a bedroom cl9or softly at midnight, advises another. Mt like a pendulum, was one age-old verity; no, like a sharp smack on the wrist was another. To some, boldness is the friend: 'Never up, never in' was the ancient Scottish rule. Simul- taneously countermanded by others cham- pioning the softer approach -- 'For safety and certainty, always let the ball "die" at the hole.' The most certain maxim of the golf green, however, has always been `There's many a slip `twixt lip and cup.'

Half the European team at Kiawah Island next week have, to my certain knowledge, had a dose of the putting-green `yips' — and as the one and only Longhurst said, 'Once you've had 'em, you've got `em.' In the last thrilling Ryder Cup match at the Belfry in Birmingham two years ago, Sam Torrance came out to cure his yips with a great 5-ft stick of a putter, the top of which knocked the pencil-stub from behind Sam's ear as he bent over it looking like the guy from Dyno-Rod attacking an intricate and particularly smelly drain. Still, it work- ed for a bit. Till the yips yapped at him once more. I wonder what Sam will come up with next week? Or take Bernard Langer, who has suf- fered more than most. At the Belfry, on the greens, he was favouring the one- handed putt, an incredible fiddler's elbow of a contortion that had his wrist 'splinted' by bracing the club shaft against his fore- arm, with the spare hand manacling the `working' wrist like a vice. One day I followed Nick Faldo. On his inward nine he muffed a couple of sinkable putts, so straight from the 18th he marched grimly to the practice green, threw down 50 balls and looked to pot them, alternately with his eyes tight shut and wide open, but neither way watching the ball proceed on its way towards the hole. Afterwards he explained, 'Visual information can too easily overpower the "feel" in your hands if the shot is true.'

Some just resort to superstition. Sever- iano Ballesteros has fired caddies for pre- senting him a ball bearing a number '3' on it. He is convinced it will make him three-putt. And watch how, after he has studied his ball and the camber of the green from every imaginable angle, the Spaniard will meticulously make sure he never walks back to the ball past its right-hand side. If he did, he knows he would miss the putt.

And if, still, he does botch it, the fault will not be with him — but with the make of his club, the nap of the green, the cut of the grass, the noises of the crowd or the click of the cameras. Or, as Wodehouse had it, 'the uproar of butterflies in the adjoining meadows'.