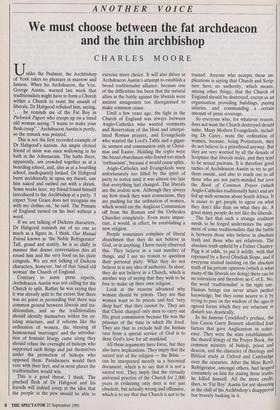 We must choose between the fat archdeacon and the thin archbishop

Unlike the Psalmist, the Archbishop of York takes no pleasure in marrow and fatness. When his Archdeacon, the Ven. George Austin, warned last week that traditionalists might have to form a Church within a Church to resist the assault of liberals, Dr Habgood rebuked him, saying, . . he reminds me of the Fat Boy in Pickwick Papers who creeps up on a timid old woman saying "I wants to make your flesh creep".' Archdeacon Austin is portly, so the remark was pointed.

This is not the first recorded example of Dr Habgood's sizeism. An ample clerical friend of mine was once wallowing in his bath in the Athenaeum. The baths there, apparently, are crowded together as at a boarding school, and, also as at a boarding school, inadequately locked. Dr Habgood burst accidentally in upon my friend, saw him naked and rushed out with a shriek. Some weeks later, my friend found himself introduced to the Archbishop at a party. 'I expect Your Grace does not recognise me with my clothes on,' he said. The Primate of England turned on his heel without a word.

If we are talking of Dickens characters, Dr Habgood reminds me of no one so much as a figure in, I think, Our Mutual Friend known as 'the Noble Refrigerator' Tall, grand and stately, he is so chilly in manner that dinner conversation dies all round him and the very food on his plate congeals. We are not talking of Dickens characters, however, but of that 'timid old woman' the Church of England.

Contrary to some press reports, Archdeacon Austin was not calling for the Church to split. Rather he was saying that it was already split to the extent that there was no point in pretending that there was common ground between liberals and tra- ditionalists, and so the traditionalists should identify themselves within the ex- isting structure, and if reforms like the ordination of women, the blessing of homosexual 'marriages' and the introduc- tion of feminist liturgy came along they should refuse the oversight of bishops who supported such things and put themselves under the protection of bishops who opposed them. Parishioners would then vote with their feet, and in most places the traditionalists would win.

This is a good threat, I think. The pinched flesh of Dr Habgood and his friends will indeed creep at the idea that the people in the pew should be able to exercise more choice. It will also shiver at Archdeacon Austin's attempt to establish a broad traditionalist alliance, because one of the difficulties has been that the natural allies in the battle against the liberals were ancient antagonists too disorganised to make common cause.

Until a few years ago, the fight in the Church of England was always between Anglo-Catholics who wanted vestments and Reservation of the Host and interpo- lated Roman prayers, and Evangelicals who wanted the Lord's Table and a gigan- tic sermon and communion only at Christ- mas and Easter. Holding the ropes were the broad churchmen who feared too much `enthusiasm', because it would cause splits.

Anglo-Catholics and Evangelicals were unfortunately too filled by the spirit of party to notice until it was almost too late that everything had changed. The liberals are the zealots now. Although they always say how much they want ecumenism, they are pushing for the ordination of women, which would cut the Anglican Communion off from the Roman and the Orthodox Churches completely. Even more impor- tant, it would, in effect, be establishing a new religion.

Look at the reasons advanced why women should be priests. They are that women want to be priests and feel 'very deep hurt' that they cannot be. They are that Christ charged only men to carry out His great commission because He was the prisoner of the time in which He lived. They are that to exclude half the human race from a special service of God is to deny God's love for all mankind.

All these arguments have force, but they also have implications. They imply that the sacred text of the religion — the Bible can be interpreted merely as a historical document, which is to say that it is not a sacred text. They imply that the virtually universal practice of the Church for 2,000 years in ordaining only men is not just obsolete, but actually wrong and offensive, which is to say that that Church is not to be trusted. Anyone who accepts these im- plications is saying that Church and Scrip- ture have no authority, which means. among other things, that the Church of England should be destroyed, except as an organisation providing buildings, paying salaries, and commanding a certain amount of press coverage.

So everyone who, for whatever reason, does not want the Church destroyed should unite. Many Modern Evangelicals, includ- ing Dr Carey, want the ordination of women, because, being Protestants, they do not believe in a priesthood anyway. But they are very worried by all the denials of Scripture that liberals make, and they tend to be sexual puritans. It is therefore good tactics of Archdeacon Austin to try to get them onside, and also to reach out to all those who are not party-minded but love the Book of Common Prayer (which Anglo-Catholics traditionally hate) and are fed up with sermons about South Africa. It is easier to get people to agree on what they don't like than on what they do. A great many people do not like the liberals.

The fact that such a strange coalition needs to be forged undermines the argu- ment of some traditionalists that the battle is between those who believe in absolute truth and those who are relativists. The absolute truth upheld by a Father Chantry- Pigg is at odds, to put it mildly, with that espoused by a Revd Obadiah Slope, and if everyone started insisting on the absolute truth of his private opinions (which is what many of the liberals are doing) there can be no toleration and therefore no C of E. No, the word 'traditionalist' is the right one. Human beings can never attain perfect knowledge, but they come nearer to it by trying to pass on the wisdom of the ages in agreed forms which they are reluctant to disturb too drastically.

In his famous Crockford's preface, the late Canon Garry Bennett identified four factors that gave Anglicanism its coher- ence. They were the state establishment, the shared liturgy of the Prayer Book, the common ministry of bishop, priest and deacon, and the character of theology and Biblical study at Oxford and Cambridge over the centuries. After the Most Revd. Refrigerator, amongst others, had heaped contumely on him for stating these truths, he killed himself. All the more credit, then, to 'Fat Boy' Austin for not shivering in the chill of his Archbishop's disapproval but bravely basking in it.