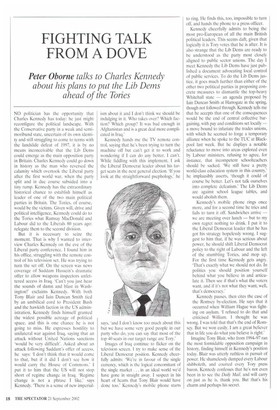 FIGHTING TALK FROM A DOVE

NO politician has the opportunity that Charles Kennedy has today: he just might reconfigure the political landscape. With the Conservative party in a weak and semimoribund state, uncertain of its own identity and still struggling to come to terms with the landslide defeat of 1997, it is by no means inconceivable that the Lib Dems could emerge as the main opposition party in Britain. Charles Kennedy could go down in history as the man who reversed the calamity which overtook the Liberal party after the first world war, when the party split and in due course subsided into a tiny rump. Kennedy has the extraordinary historical chance to establish himself as leader of one of the two main political parties in Britain. The Tories, of course, would be the victims. Given will, drive and political intelligence, Kennedy could do to the Tories what Ramsay MacDonald and Labour did to the Liberals 80 years ago: relegate them to the second division.

But it is necessary to seize the moment. That is why I wanted to interview Charles Kennedy on the eve of the Liberal party conference. I found him in his office, struggling with the remote control of his television set. He was trying to turn the set off. On the screen was news coverage of Saddam Hussein's dramatic offer to allow weapons inspectors unfettered access in Iraq. 'Can't you just hear the sounds of damn and blast in Washington!' exclaims Kennedy. With both Tony Blair and lain Duncan Smith tied by an umbilical cord to President Bush and the hawkish faction in the US administration, Kennedy finds himself granted the widest possible acreage of political space, and this is one chance he is not going to miss. He expresses hostility to unilateral war against Iraq, saying that an attack without United Nations sanctions 'would be very difficult'. Asked about an attack following Saddam's offer of access, he says: 'I don't think that it would come to that, but if it did I don't see how it would carry the House of Commons.' I put it to him that the US will not stop short of regime change in Iraq. 'Regime change is not a phrase I like,' says Kennedy. 'There is a sense of new imperial ism about it and I don't think we should be indulging in it. Who takes over? Which faction? Which group? It was bad enough in Afghanistan and is a great deal more complicated in Iraq.'

Kennedy hands me the TV remote control, saying that he's been trying to turn the machine off but can't get it to work and wondering if I can do any better. I can't. While fiddling with this implement, I ask the Liberal Democrat leader about his target seats in the next general election. 'If you look at the straightforward psephology,' he

says, 'and I don't know too much about this but we have some very good people in our party who do, you can say that most of the top 40 seats in our target range are Tory.'

Images of Iraq continue to flicker on the television screen. I try to make sense of the Liberal Democrat position. Kennedy cheerfully admits: 'We're in favour of the single currency, which is the logical concomitant of the single market ... in an ideal world we'd have gone in straight away. I suspect in his heart of hearts that Tony Blair would have done too.' Kennedy's mobile phone starts to ring. He finds this, too, impossible to turn off, and hands the phone to a press officer.

Kennedy cheerfully admits to being the most pro-European of all the main British political leaders. This seems daft, given that logically it is Tory votes that he is after, It is also strange that the Lib Dems are ready to be understood as the party most closely aligned to public sector unions. The day I meet Kennedy the Lib Dems have just published a document advocating local control of public services. To do the Lib Dems justice, it goes much further than either of the other two political parties in proposing concrete measures to dismantle the top-heavy Whitehall state — an agenda proposed by lain Duncan Smith at Harrogate in the spring, though not followed through. Kennedy tells me that he accepts that one of the consequences would be the end of central collective bargaining, with pay and conditions set locally — a move bound to infuriate the trades unions, with which he seemed to forge a temporary alliance when he spoke to the TUC at Blackpool last week. But he displays a notable reluctance to move into areas explored even by Labour ministers, refusing to agree, for instance, that incompetent schoolteachers should be sacked. 'We still have a pretty world-class education system in this country,' he implausibly asserts, 'though it could of course be better. Let's not talk ourselves into complete defeatism.' The Lib Dems are against school league tables, and would abolish them.

Kennedy's mobile phone rings once more, and for a second time he tries and fails to turn it off. Sandwiches arrive — we are meeting over lunch — but to my own regret nothing to drink. J put it to the Liberal Democrat leader that he has got his strategy hopelessly wrong. I suggest to him that, if he was serious about power, he should shift Liberal Democrat policy to the right of Labour and the left of the stumbling Tories, and mop up. For the first time Kennedy gets angry. 'That's exactly what we should not do. In politics you should position yourself behind what you believe in and articulate it. Then see if that's what the voters want, and if it's not what they want, well, that's democracy.'

Kennedy pauses, then cites the case of the Romsey by-election. He says that it occurred when William Hague was fight ing on asylum. 'I refused to do that and

criticised William. I thought he was wrong. I was told that that's the end of Romsey. But we won easily. I am a great believer that in life you do what you believe is right.'

Imagine Tony Blair, who from 1994-97 ran the most formidable opposition campaign in history, finding himself in Kennedy's position today. Blair was utterly ruthless in pursuit of power. He shamelessly dumped every Labour shibboleth, and courted every Tory press baron. Kennedy confesses that he's not even been in to see the Daily Malt and will carry on just as he is, thank you. But that's his charm and perhaps his secret.