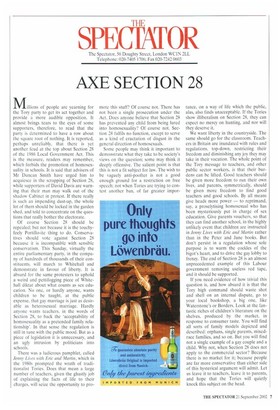 Millions of people are yearning for the Tory party to get its act together and provide a more audible opposition. It almost brings tears to the eyes of some supporters, therefore, to read that the party is determined to have a row about the square root of nothing. It is reported, perhaps unreliably, that there is yet another feud at the top about Section 28 of the 1986 Local Government Act. This is the measure, readers may remember, which forbids the promotion of homosexuality in schools. It is said that advisers of Mr Duncan Smith have urged him to acquiesce in the scrapping of Section 28, while supporters of David Davis are warning that their man may walk out of the shadow Cabinet in protest. If there really is such an impending dust-up, the whole lot of them should be locked in the garden shed, and told to concentrate on the questions that really bother the electorate.

Of course Section 28 should be repealed: but not because it is the touchyfeely Portillo-ite thing to do. Conservatives should vote against Section 28 because it is incompatible with sensible conservatism. This Sunday, virtually the entire parliamentary party, in the company of hundreds of thousands of their constituents, will march to Whitehall and demonstrate in favour of liberty. It is absurd for the same protesters to uphold a weird and pettifogging piece of Whitehall diktat about what counts as sex education. No one, or hardly anyone, wants children to be taught, at the public expense, that gay marriage is just as desirable as heterosexual marriage. Hardly anyone wants teachers, in the words of Section 28, to back the 'acceptability of homosexuality as a pretended family relationship'. In that sense the regulation is still in tune with the public mood, But as a piece of legislation it is unnecessary, and an ugly intrusion by politicians into schools.

There was a ludicrous pamphlet, called Jenny Lives with Eric and Martin, which in the 1980s prompted the wrath of traditionalist Tories, Does that mean a large number of teachers, given the ghastly job of explaining the facts of life to their charges, will seize the opportunity to pro mote this stuff? Of course not. There has not been a single prosecution under the Act. Does anyone believe that Section 28 has prevented any child from being lured into homosexuality? Of course not. Section 28 fulfils no function, except to serve as a kind of eructation of disgust in the general direction of homosexuals.

Some people may think it important to demonstrate what they take to be society's views on the question; some may think it deeply offensive. The salient point is that this is not a fit subject for law. The wish to be vaguely anti-poofter is not a good enough ground for a restriction on free speech: not when Tories are trying to contest another ban, of far greater impor tance, on a way of life which the public, alas, also finds unacceptable. If the Tories show illiberalism on Section 28, they can expect no mercy on hunting, and nor will they deserve it.

We want liberty in the countryside. The same should go for the classroom. Teachers in Britain are inundated with rules and regulations, top-down, restricting their freedom and diminishing any joy they may take in their vocation. The whole point of the Tory message to teachers, and other public sector workers, is that their burdens can be lifted. Good teachers should be given more freedom to run their own lives, and parents, symmetrically, should be given more freedom to find good teachers and good schools. By all means give heads more power — to reprimand, say, a proselytising homosexual who has been mysteriously put in charge of sex education. Give parents vouchers, so that they can find another school, in the highly unlikely event that children are instructed in Jenny Lives with Eric and Martin rather than in the Peter and Jane books. But don't persist in a regulation whose sole purpose is to warm the cockles of the bigot's heart, and to drive the gay lobby to frenzy. The end of Section 28 is an almost unprecedented example of this Labour government removing useless red tape, and it should be supported.

If you need evidence of how trivial this question is, and how absurd it is that the Tory high command should waste shot and shell on an internal dispute, go to your local bookshop, a big one, like Waterstone's or Borders. Look at the fantastic riches of children's literature on the shelves, produced by the market, in response to consumer taste. You will find all sorts of family models depicted and described: orphans, single parents, mixedrace families, and so on. But you will find not a single example of a gay couple and a child. Why not, when Section 28 does not apply to the commercial sector? Because there is no market for it; because people are far more conservative than either side of this hysterical argument will admit. Let us leave it to teachers, leave it to parents, and hope that the Tories will quietly knock this subject on the head.