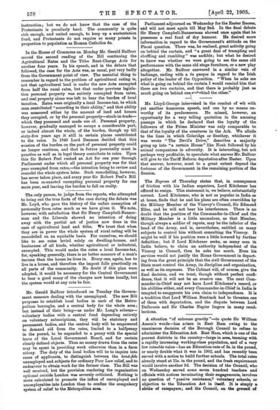 dealing with the unemployed. The new Bill proposes to establish local bodies in each of the Metro- politan boroughs, and a central body for the whole area ; but instead of their being-3A under Mr. Long's scheme— voluntary bodies with a central fund depending entirely on voluntary subscriptions, they will be statutory and permanent bodies, and the central body will be empowered to demand aid from the rates, limited to a halfpenny in the pound, to be expanded to a penny with the special leave of the Local Government Board, and for certain clearly defined objects. Thus no money drawn from the rates may be spent in providing work otherwise than in a farm colony. The duty of the local bodies will be to inquire into cases of applicants, to distinguish between the bond-lute unemployed and subjects for ordinary Poor Law relief, and to endeavour to obtain work for the former class. The Bill was well received, but the provision rendering the organisation optional outside London was severely criticised. Nothing is more calculated to promote the influx of unemployed and unemployables into London than to confine the compulsory system of relief to the Metropolitan area.