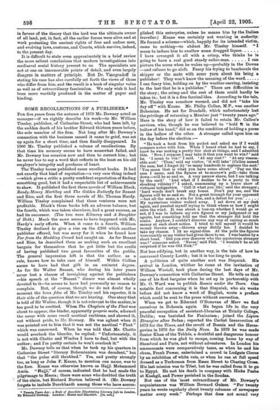 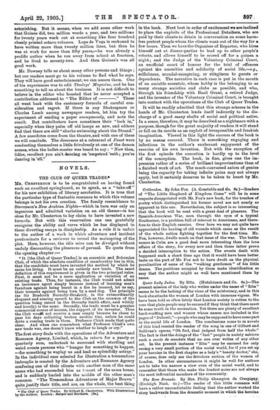 SOME RECOLLECTIONS OF A PUBLISHER.* Fox five years from the

autumn of 1879 Mr. Downey acted as manager—if we rightly describe his work—to Mr. William Tinsley, publisher, of Catherine Street, who had been left, by the sudden death of his brother Edward thirteen years before, the sole member of the firm. Not long after Mr. Downey s connection with the business ceased it came to grief, was set up again for a short time, and then finally disappeared. In 1900 Mr. Tinsley published a volume of recollections. By that time his memory seems to have somewhat failed, and Mr. Downey has occasion now and then to correct him ; but he never has to say a word that reflects in the least on his old employer's integrity and goodness of heart.

The Tinsley house published some excellent books. It had not exactly that kind of reputation—a very rare thing indeed —which gives a critic a pretty confident expectation of finding something good, but it had a respectable list of achievements to show. It published the first three novels of William Black, Ready-Money Mortiboy and The Golden Butterfly for Besant and Rice, and the first three novels of Mr. Thomas Hardy. William Tinsley complained that these ventures were not profitable. Black's three books left an adverse balance, but the fourth, which was taken elsewhere, had a great success, as had its successor. (The two were Kilmeny and A Daughter of Heth.) Much the same seems to have happened with Mr. Hardy's early efforts. When it tame to a fourth, William Tinsley declined to give a rise on the £300 which another publisher offered, but was sorry for it when be found bow Far from the Madding Crowd bad caught on. As for Besant and Rice, he described them as making such an excellent bargain for themselves that he got little but the credit of having published two great favourites of the public. The general impression left is that the author, as a rule, knows how to take care of himself. Wilkie Collins seems to have had that gift in an eminent degree. As for Sir Walter Besant, who during his later years never lost a chance of inveighing against the publishers —his speech at the " Besant " dinner was almost wholly devoted to it—he seems to have had personally no reason to complain. But, of course, though we do not doubt for a moment the bona fides of Mr. Tinsley and his reporter, it is their side of the question that we are hearing. One story that is told of Sir Walter, though it is not relevant to the matter, is too good to be omitted. When The Chaplain of the Fleet was about to appear, the binder, apparently proprio motu, adorned the cover with some small nautical emblems, and showed it, not without pride, to Mr. Downey. He was aghast when it was pointed out to him that it was not the nautical "Fleet" which was concerned. When be was told that Mr. Chatto would overlook the blunder, he replied: "Unfortunately, it is not with Chatto and Windus I have to deal, but with the author ; and I'm pretty certain he won't overlook it."

Mr. Downey tells us that when he took up his quarters in Catherine Street "literary Bohemianism was decadent," but that "the pulse still throbbed." Yes, and pretty strongly too, as long as John F. Keane, to mention one name, was to the fore. Keane was otherwise known as Hajji Mohammed Amin. "Hajji," of course, indicated that he had made the pilgrimage to Mecca; there were some who doubted the truth of the claim, but Richard Burton believed it. (Mr. Downey forgets to include Burckhardt among those who have &mom- plished this enterprise, unless be means him by the Italian traveller.) Keane was certainly not wanting in audacity. He formed a scheme—which, happily for its intended victim, came to nothing—to abduct Mr. Tinsley himself. "I mean to induce him to swallow some drugged liquor I have arranged it all with a crimp, who thinks he is

going to have a real good steady sailor-man I can picture the scene when he wakes up—probably in the Downs —and refuses to go aloft. Fancy his trying to bamboozle the skipper or the mate with some yarn about his being a

publisher! They won't know the meaning of the word I can fancy him, holding on by the weather-earring, insisting to the last that he is a publisher." There are difficulties in the story ; the crimp and the rest of them could hardly be taken in; but it is a fine farcical idea. According to the tale, Mr. Tinsley was somehow warned, and did not "take his day off" with Keane. Mr. Philip Callan, M.P., was another Bohemian. He sat for Dundalk, which unfortunately lost the privilege of returning a Member just "twenty years ago." Here is the story of how it failed to retain Mr. Callan's services, who, though he was believed to "hold ft in the hollow of his hand," did so on the condition of holding a purse in the hollow of the other. A stranger called upon him on the day before the election :—

"He took a book from his pocket and asked me if I would compare notes with him. When I heard what he had to say, I knew he was making a pretty fair shot at things, and I admitted this. Now, I suppose I may take it that you want to win?' said he. I mean to win !' I said. At any cost ? " At any reason- able cost." Then,' said my visitor, it will take' ((allan named the sum, but I forget it) so many hundreds to capture the seat.' 'You mean that is what you have come about.' Pay me the sum I name, and the figures at to-morrow's poll—take them down—will be so and so. A very narrow shave, but I am talking

by the card.' And what if I decline to be a party to this shocking villainy ?' I asked, summoning up a brave show of virtuous indignation. Call it what you like,' said the stranger ; hard words don't break any bones. Don't pay me, and the figures will be so and so. Not a great triumph for your opponent

—but all the same, a win for him, and a defeat for you.' My mysterious visitor walked away. I sat down at my desk again, and puzzled myself trying to think where or how I might raise the wind. It was about a toss-up whether I would go or not, if I was to believe my own figures or my judgment or my agents, but something told me that the stranger did hold the scales. Anyhow, I couldn't discover any way of raising so much money at such short notice. I tried to tell myself it would be money thrown away—thrown away dirtily too. I decided to take my chance. I lit no signal-fires. At the polls the figures were exactly as my visitor had given them to me. I was beaten by a short bead. Did you ever discover who the mysterious stranger was ?' someone asked. Never,' said Phil. I wouldn't be at all surprised if he was Old Nick.'" Not less edifying, but in another way, is the tale of how he canvassed County Louth; but it is too long to quote.

A politician of quite another sort was Stepniak. His arrival in London, whither he eame at the invitation of William Westall, took place during the last days of Mr. Downey's connection with Catherine Street. He tells us that one of his first bargains when he set up in partnership with Mr. 0. Ward was to publish Russia under the Tsars. One notable fact concerning it is that Stepniak, who six weeks before did not know a word of English, wrote a preface which could be sent to the press without correction.

When we get to Edmund O'Donovan of Mery we find ourselves in Bohemia again. He began life in the very peaceful occupation of assistant-librarian at Trinity College, Dublin; was banished for Fenianism ; joined the Legion Etrangilv after Sedan; reported the Carlist Insurrection of 1873 for the Times, and the revolt of Bosnia and the Herze- govina in 1876 for the Daily News. In 1878 he was made Senior Khan of the Tekkes, a doubtful and dangerous honour from which he was glad to escape, coming home by way of Stamboul and Paris, not without adventures. In London his amusements were comparatively tame, as when he and his chum, Frank Power, entertained a crowd in Ludgate Circus by an exhibition of white rats, or when he ran at full speed dressed as a Tarkoman from Essex Street to Charing Cross. His last mission was to Tibet, but he was called from it to go

to Egypt. He met his death in company with Hicks Pasha at Kashgil, and Power perished in the Soudan.

But one of the 'most extraordinary of Mr. Downey's acquaintances was William Bernard Gninee. "For twenty years he wrote regularly about twenty columns of newspaper matter every week." Perhaps that does not sound very astonishing. But it means, when we add some other work that Guinee did, two million words a year, and two millions for twenty years work out at something like four hundred closely printed octavo volumes. Lope de Vega is reckoned to have written more than twenty million lines, but then he was at work for more than fifty years,—he was already a prolific author when he ran away from school at fourteen, and he lived to seventy-two. And then Guinee's was all good work.

Mr. Downey tells us about many other persons and things ; but our readers must go to his volume to find what he says. They will have good entertainment, we can assure them. One of his experiences was to edit Tinsleys' Magazine, and he has something to tell us about the business. It is not difficult to believe in the editor who boasted that he never accepted a contribution addressed to "The Editor of ." These all went back with the customary formula of careful con- sideration and regret. If there is any Shakespeare or Charles Lamb among newspaper readers, let him try the experiment of sending a paper anonynwusly, and note the result. But contributors have sometimes their "look in," especially when they palm off old lamps as new, and editors find that there are still " sharks swimming about the Strand." A few anecdotes come from the theatre, and with one of these we will conclude. The danseuses at a rehearsal of Faust were conducting themselves a little frivolously at one of the demon scenes, when the ballet-master was heard to say.: "Now then, lidies, recollect you ain't dancing on 'ampstead 'eath ; you're dancing in 'ell."