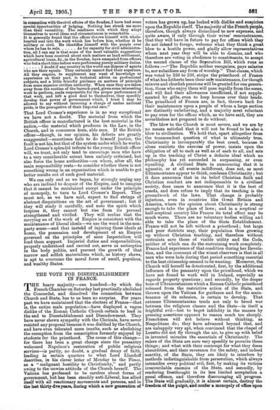 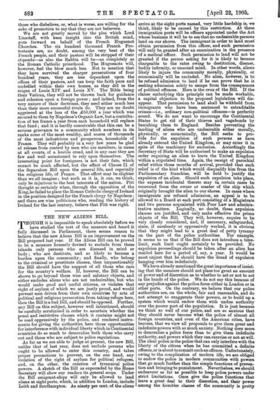 THE VOTE FOR DISESTABLISHMENT IN FRANCE. T HE heavy majority—one hundred—by

which the French Chamber on Saturday last practically abolished the Concordat, and dissolved the connection between Church and State, has to us been no surprise. For years past we have maintained that the electors of France—that is, the entire male population—have displayed a vague dislike of the Roman Catholic Church certain to lead in the end to Disestablishment and Disendowment. They have never shown sympathy with the Clericals, have never resisted any proposal because it was disliked by the Church, and have even tolerated mere insults, such as abolishing the exemption from the conscription formerly enjoyed by students for the priesthood. The cause of this change— for there has been a great change since the peasantry welcomed Napoleon's restoration of public religious services—is partly, no doubt, a gradual decay of faith, leading in certain quarters to what Lord Lla,ndaff describes, in his clever letter of Monday to the Times, as a "malignant hostility to Christianity," and partly owing to the unwise attitude of the Church herself. The Vatican has professed to be careless about forms of government, but has been steadily anti-Liberal, has allied itself with all reactionary movements and persons, and in the last thirty-five years, during which a new generation of voters has grown up, has looked with dislike and suspicion upon the Republic itself. The majority of the French people, therefore, though always disinclined to new expenses, and quite aware, if only through their wives' remonstrances, that they will have in future to pay for offices which they do not intend to forego, welcome what they think a great blow to a hostile power, and gladly allow representatives whom next year they will be able to dismiss, and who therefore are voting in obedience to constituents, to accept the second clause of the Separation Bill, which runs as follows :—" The Republic neither recognises, pays salaries to, nor subsidises any form of worship." That clause, which was voted by 336 to 236, strips the priesthood of France of what has hitherto been their only maintenance, for though minute and churlish pensions will be granted for one genera- tion, those who enjoy them will pass rapidly from the scene, and will find their allowances insufficient, if not supple- mented by gifts, even to keep houses over their heads.

The priesthood of France are, in fact, thrown back for their maintenance upon a people of whom a large section are distinctly unbelieving, and a majority most reluctant to pay even for the offices which, as we have said, they are nevertheless not prepared to do without.

The blow to the Church is most severe, and we are by no means satisfied that it will not be found to be also a blow to civilisation. We hold that, apart altogether from the transcendent question of what is ultimately true, Christianity is incomparably the best creed, because it alone restricts the exercise of power, insists upon the obligation of all to each as well as of each to all, and sets up in the teaching of Christ a definite ideal which no philosophy has yet succeeded in surpassing, or even equalling. A civilised State in announcing that it is agnostic, or at all events indifferent, does not, as most Ultramontanes appear to think, condemn Christianity ; but it does announce that in its belief Christian faith and Christian conduct are not indispensable to a civilised society, does cease to announce that it is the best of creeds, and does refuse to imply that its teaching is the groundwork of the laws. That change is probably injurious, even in countries like Great Britain and America, where the opinion about Christianity is strong enough to take the place of laws ; and in a sceptical or half-sceptical country like France its total effect may be much worse. There are no voluntary bodies willing and able to take the place of the State Establishment.

France will not be left without a priesthood ; but large and poor districts may, their population thus growing up without Christian teaching, and therefore without restraints save those of visible utility and the Code, neither of which can do the restraining work completely. France had experience of that condition during her Revolu- tion, and the comment of the wisest observers is that in all • men who were lads during that period something essential to the best citizenship seemed to be wanting. Moreover, the Church will herself be deteriorated, first, by the additional influence of the peasantry upon the priesthood, which we have not found to work well in Ireland, especially as regards property questions ; and secondly, by the deeper tone of Ultmmontanism which a Roman Catholic priesthood released from the restrictive action of the State, and thrown upon the Vatican for guidance and for the main- tenance of its cohesion, is certain to develop. That extreme Ultramontanism tends not only to breed war between the religious classes and the State—in itself a frightful evil—but to beget infidelity in the masses by pressing assertions opposed to reason much too sharply. Frenchmen will not believe without thinking, as Neapolitans do ; they have advanced beyond that, and are unhappily very apt, when convinced that the chapel of Loretto did not fly through the air, to give up with belief in invented miracles the essentials of Christianity. The rulers of the State are sure very speedily to perceive these things ; and what with their contempt for what they deem absurdities, and their reverence for the safety, and indeed sanctity, of the State, they are likely to interfere by methods indistinguishable from persecution, which always intensifies every political evil, first, by making its victims irreconcilable enemies of the State, and secondly, by rendering freethought in its less limited acceptation a penal offence, and• therefore discouraging all progress. The State will gradually, it is almost certain, destroy the freedom of the pulpit, and confer a monopoly of office upon - - those who disbelieve, or, what is worse, are willing for the sake of promotion to say that they are not believers. We are not greatly moved by the plea which Lord Llandaff, with keen insight into the British mind, puts forward on behalf of the French Huguenot Churches. The six hundred thousand French Pro- testants are, no doubt, among the very best of the French people, and their pastors will be stripped of their stipends—as also the Rabbis will be—as completely as the Roman Catholic priesthood. The Huguenots will, however, feel the blow much less. Not to mention that they have survived the sharper persecutions of four hundred years, they are less dependent upon the offices of their pastors, and can keep the faith pure and undefiled within their own homes, as they did in the reigns of Louis XIV. and Louis XV. The Bible being their Vatican, they -will not be thrown back for guidance and cohesion upon a foreign power ; and indeed, from the very nature of their doctrines, they need either much less than their more successful rivals do. They are no doubt aggrieved at the loss of the £50,000 a year which was secured to them by Napoleon's Organic Law, but a contribu- tion of ten francs a year from each household will replace that fund ; and it is hardly conceivable that this can be a serious grievance to a community which numbers in its ranks some of the most wealthy, and scores of thousands of the most industrious and prosperous, households of France. They will probably in a very few years be glad of release from control by men who are members, in name at all events, of a hostile creed, and in any case they are few and well accustomed to rely upon themselves. The interesting point for foreigners is not their fate, which cannot be much affected, but the effect of Clause II. of the Separation Bill upon the general life, and especially the religious life, of France. That effect may be slighter than we all imagine ; but such as it is, it can, we think, only be injurious to the best interests of the nation. Pitt thought so certainly when, through the opposition of the King, he failed to place the Roman Catholic clergy of Ireland in the position designed for the French clergy by Napoleon ; and there are wise politicians who, reading the history of Ireland for the last century, believe that Pitt was right.