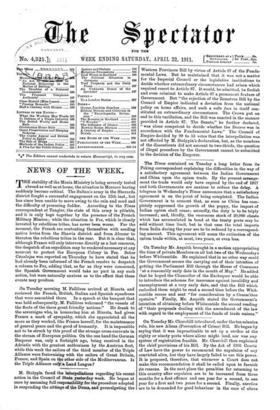 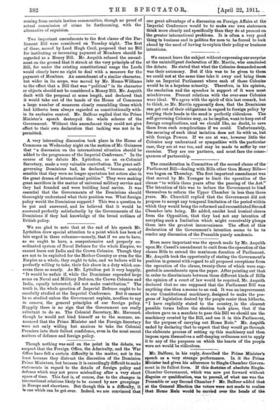 On Tuesday Mr. Churchill introduced, under the ten minutes rule,

his new Aliens (Prevention of Crime) Bill. He began by saying that it was impracticable to set up a cordon at the eighty or ninety ports where aliens might land, nor was any system of registration feasible. Mr. Churchill then explained the chief provisions of his Bill. By the Act of 1905 Courts of Law have the power to recommend the expulsion of any convicted alien, but they have largely failed to use this power. It is proposed, therefore, that whenever a Court does not make this recommendation it shall be called upon to furnish its reasons. In the next place the penalties for returning to this country after expulsion are to be increased from three months for a first offence and one year for a second, to one year for a first and two years for a second. Finally, sureties are to be demanded for good behaviour in the case of aliens

coming from certain lawless communities, though no proof of actual commission of crime be forthcoming, with the alternative of expulsion.