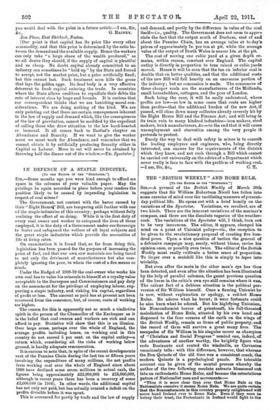 IN DEFENCE OF A STAPLE INDUSTRY.

ITo THE EDITOR OF THE " SPECTATOE."]

Sin,—Some months ago you were kind enough to afford me space in the columns of your valuable paper. May the privilege be again accorded to place before your readers the position likely to be caused by impending legislation in respect of coal mines ?

The Government, not content with the havoc caused by their "Eight Homer Bill, are tampering still further with one of the staple industries of this country ; perhaps without fully realising the effect of so doing. While it is the first duty of every coal owner and worker to safeguard the lives of those employed, it is the duty of a Government under our Sovereign to foster and safeguard the welfare of all loyal subjects and the great staple industries which provide the necessities of life at living rates.

On examination it is found that so far from doing this, legislation has been passed for the purpose of increasing the price of fuel, and that our own raw materials are being taxed to not only the detriment of manufacturers but also com- pletely ignoring the pcor, to whom the cost of a fire means so much.

Under the Budget of 1909-10 the coal-owner who works his own coal has to value his minerals to himself at a royalty value acceptable to the Surveyors and Commissioners and pay duty on the assessment for the privilege of employing labour, sup- porting a staple industry, and risking his capital, regardless of profit or loss. The amount so paid has at present not been recovered from the consumer, but, of course, coats of working are higher.

The reason for this is apparently not so much a vindictive spirit in the person of the Chancellor of the Exchequer as it is the belief that coal owners and workers are rich and can afford to pay. Statistics will show that this is an illusion. Over large areas, perhaps over the whole of England, the average profits, including losses, on working coal in this country do not exceed 5 per cent. on the capital outlay—a return which, considering all the risks of working below ground, is hardly adequate remuneration.

It is curious to note that, in spite of the recent developments east of the Pennine Chain during the last ten or fifteen years involving the expenditure of many millions, the net profits from working ccal over the whole of England since about 1898 have declined some seven millions in actual cash, the figures being approximately £22,000,000 to £15,000,000, although in recent years there has been a recovery of some £2,000,000 (in 1906). In other words, the additional capital has not only not paid, but has actually created a deficit on the profits divisible before it was spent.

This is accounted for partly by trade and the law of supply and demand, and partly by the difference in value of the coal itself—i.e., quality. The Government does not seem to appre. ciate the fact that the output south of Durham, east of and about the Pennine Chain, has an average value at to-day's prices of approximately 7s. per ton at pit, while the average value of the output of South Wales is nearer 14s. at the pit.

The cost of moving one cubic yard at a given depth re- mains, within reason, constant over England. The capital outlay is directly in proportion to tons raised or cubic yards moved. Hence it will be seen that the tax on inferior coal is double that on better qualities, and that the additional costs of the new Bill will fall heavily on an enormous portion of the industry; but no concession is made. The consumers of these cheaper coals are the manufacturers of the Midlands, small householders, cottagers, and the poor of London.

Such being the case, it will be easily understood, where profits are low—so low in scme cases that costs are higher than profits—that the additional burden of the new Act, if passed, will close down many collieries already severely hit by the Eight Hours Bill and the Finance Act; and will bring in its train ruin to many kindred industries—iron makers, steel makers, brick manufacturers, &c.—to the end that it will cause unemployment and starvation among the very people it pretends to protect.

Surely the way to deal with safety in mines is to consult the leading employers and engineers, who, being directly interested, can answer for the requirements of the district which they know, and not rush through a Bill which cannot be carried out universally on the advice of a Department which never really is face to face with the problem of working coal.