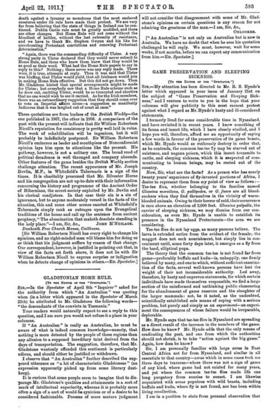 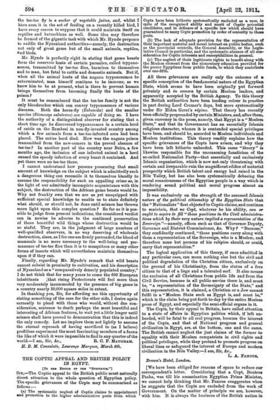 SIR,—My attention has been directed to Mr. R. S. Hynde's letter which appeared in your issue of January 21st on the subject of "Game Preservation and Sleeping Sick- ness," and I venture to write to you in the hope that your columns will give publicity to this most earnest protest against what I regard as Mr. Hynde's hasty and ill-considered statements.

I formerly lived for some considerable time in Nyasaland. and have revisited it in recent years. I know something of its fauna and insect life, which I have closely studied, and I hope you will, therefore, afford me an opportunity of saying a few words in favour of the preservation of its game beasts, which Mr. Hynde would so ruthlessly destroy in order that, as he contends, the common tse-tse fly may be starved out of existence, and nagana poison, which this insect transmits to cattle, and sleeping sickness, which it is suspected of com- municating to human beings, may be rooted out of the country.

Now, Sir, what are the facts ? As a person who has nearly twenty years' experience of fly-invested portions of Africa, I desire to represent them from my point of view as follows :— Tse-tse flies, whether belonging to the families named Glossina morsitans, G. palliped,es, or G. fusca are all blood- suckers when they find themselves in the vicinity of warm- blooded animals. Owing to their horror of cold, theiroccurrence is rare above an elevation of 3,000 feet. Glossina palpalis, the carrier of sleeping sickness, we may dismiss from our con- sideration, as even Mr. Hynde is unable to establish its presence in the Nyasaland Protectorate—the area we are considering.

Tae-tse flies do not lay eggs, as many persons believe. The larva is extruded entire from the oviduct of the female; the maggot does not seek nourishment, but simply lies in con- cealment until, some forty days later, it emerges as a fly from the hard, elliptical pupa.

The theory that the common tse-tse is not found far from game—preferably buffalo and kudu—is, unhappily, one firmly believed by many, and one to which, without sufficient examina- tion of the facts, several well-known persons have lent the weight of their not inconsiderable authority. Led away, therefore, by hasty and unproven statements, for which certain individuals have made themselves responsible, we find a large section of the uninformed and unthinking public clamouring for the abandonment of game reserves and the slaughter of the larger mammals : not, be it noted, as the undoubted, scientifically established sole means of coping with a serious problem, but purely and simply as an experiment—an experi- ment the consequences of whose failure would be irreparable, deplorable.

Mr. Hynde says that tse-tse flies in Nyasaland are spreading

as a direct result of the increase in the numbers of the game. How does he know P Mr. Hynde adds that the only means of eradicating the pest, and one from which the authorities should not shrink, is to take "action against the big game." Again, bow does he know P Sir, I am personally familiar with large areas in East Central Africa not far from Nyasaland, and similar in all essentials to that country—areas which in some cases took me three days to traverse—where there was not a sign of game of any kind, where game had not existed for many years, and yet where the common tse-tse flies made life one long purgatory from sunrise to sunset. I am likewise acquainted with areas populous with wild beasts, including buffalo and kudu, where fly is not found, nor has been within living recollection.

I am in a position to state from personal observation that

the tse-tse fly is a sucker of vegetable juices, and, whilst I IMve seen it in the act of feeding on a recently killed bird, I have every reason to suppose that it could maintain itself on reptiles and batrachians as well. Some idea may therefore be formed of the gigantic task with which Mr. Ilynde proposes to saddle the Nyasaland authorities—namely, the destruction not only of great game but of the small animals, reptiles, and birds.

Mr. Hynde is perfectly right in stating that game beasts form the reservoir hosts of certain parasites, called trypano- somes, transmitted by tse-tse flies, harmless to themselves and to man, but fatal to cattle and domestic animals. But if, when all the animal hosts of the nagana trypanosomes be exterminated, man himself continue to be immune, as we know him to be at present, what is there to prevent human beings themselves from becoming finally the hosts of the poison P

It must be remembered that the tse-tse family is not the only bloodsucker which can convey trypanosomes of various diseases. Both the horse-fly (Tabanida) and the smaller species (Stamozys calutrans) are capable of doing so. I have the authority of a distinguished observer for stating that a short time ago he discovered trypanosomes in a certain herd of cattle on the Zambesi in non-fly-invested country among which a few animals from a tse-tse-infected area had been placed. The entire herd died. How was the nagana poison transmitted from the new-comers in the proved absence of tse-tse P In another part of the country near Beira, a few months ago, the inclusion of one infected animal in a herd caused the speedy infection of every beast it contained. And yet there were no tse-tse there.

I cannot understand how persons possessing that small amount of knowledge on the subject which is admittedly such a dangerous thing can reconcile it to themselves blandly to assume the responsibility for such an appalling crime as, in the light of our admittedly incomplete acquaintance with this subject, the destruction of the African game beasts would be. Why not frankly own that we are as yet unequipped with sufficient special knowledge to enable us to state definitely what should, or should not, be done until science has thrown more light upon this complex question P So far as it is pos- sible to judge from present indications, the considered verdict can in nowise be adverse to the continued preservation of those beautiful wild things whose destruction would be so sinful. They are, in the judgment of large numbers of well-qualified observers, in no way deserving of wholesale destruction, since, as I for one am firmly persuaded, the blood of mammals is no more necessary to the well-being and per- manence of tse-tee flies than it is to mosquitoes or many other forms of insects which will nevertheless maintain themselves upon it if they can.

Finally, regarding Mr. Hynde's remark that wild beasts cannot subsist in proximity to cultivation, and his description of Nyasaland as a " comparatively densely populated country," I do not think that for many years to come the 600 European inhabitants ;that rising Protectorate will feel more than very moderately incommoded by the presence of big game in a country nearly 50,000 square miles in extent.

In thanking you, Sir, for affording me this opportunity of stating something of the case for the other side, I desire again earnestly to plead with those who would, without due con- sideration, sentence to death perhaps the most beautiful and interesting of African features, to wait yet a little longer until science shall have proved to demonstration that this is indeed the only remedy. Let me implore them not lightly to assume the eternal reproach of having sacrificed to (as I believe) profitless experiment the most fascinating members of a fauna the like of which it were impossible to find in any quarter of the