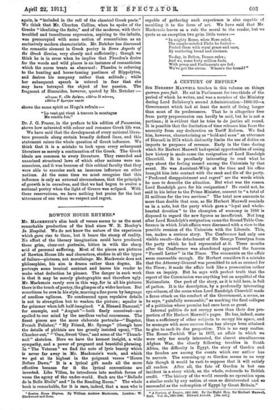 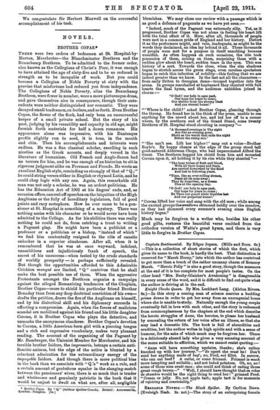 A CENTURY OF EMPIRE.*

SIR HERBERT MAXWELL touches in this volume on things quorum pars fuit. He sat in Parliament for two-thirds of the period of which he writes, and was a member of the Ministry during Lord Salisbury's second Administration-1886-92—a Government which had at least the merit of living longer than most of its predecessors. That he is altogether free from party prepossession can hardly be said, but he is not a partisan ; it is evident that he tries to do justice all round. It is possible that the limitation of time releases him from the necessity from any declaration on Tariff Reform. We find him, however, characterising as "bold and sane" an utterance of Disraeli in 1874 which distinctly limits the use of duties on imports to purposes of revenue. Early in the time during which Sir Herbert Maxwell had special opportunities of seeing how history is made came the resignation of Lord Randolph Churchill. It is peculiarly interesting to read what be says about the feeling roused among the Unionists by that event. He was Assistant-Whip at the time and his office brought him into contact with the rank and file of the party. " Profound disappointment and regret" are the words which he uses to describe the situation. But what was the reason Lord Randolph gave for his resignation P He could not, he said in his letter to the Prime Minister, consent to "a total of 31 millions for the two services." The total now amounts to more than double that sum, as Sir Herbert Maxwell reminds us in a note, but the party which gave a " loyal and whole- hearted devotion" to the champion of economy in 1886 is disposed to regard the new figures as insufficient. Not long after Lord Randolph's resignation came the Round Table Con- ference in which Irish affairs were discussed with a view to the possible reunion of the Unionists with the Liberals. This, too, makes a curious story. The Conference had only one visible result—the detachment of Sir George Trevelyan from the party which he had represented at it. Three months after the Conference was abandoned appeared the famous " Parnell Letter" in the Times. The comments on the affair seem reasonable enough. Sir Herbert considers it a mistake that the Attorney-General was permitted to act as counsel for the Times; it made the affair look like a prosecution rather than an inquiry. But he says with perfect truth that the report of the Commission was anything but an acquittal of the Nationalists. One part of the story, as it is told here, is full of pathos. It is the description, by a profoundly interesting eye-witness, of the scene when Lord Randolph Churchill made a fierce attack on the conduct of the Government, a scene, as he says, " painfully memorable," as marking the final collapse of a politician whose promise had once been so great.

Internal politics do not occupy more than their due pro- portion of Sir Herbert Maxwell's pages. He has, indeed, more than a sufficiency of other subjects to occupy his space, and he manages with more success than has always been attained to give to each its due proportion. This is no easy matter. The Russo-Turkish War in 1877, an affair in which we were only too nearly interested, the almost simultaneous Afghan War, the closely following troubles in South Africa, the difficulty in Egypt, the story of Gordon and the Soudan are among the events which our author has to narrate. The summing-up re Gordon seems to us very fair though it would be rash to suppose that it will satisfy all readers. After all, the fate of Gordon is but one incident in a story which, on the whole, redounds to British credit. "The history of the world records no operation upon a similar scale by any nation at once so disinterested and so successful as the redemption of Egypt by Great Britain."

We congratulate Sir Herbert Maxwell on the successful accomplishment of his task.