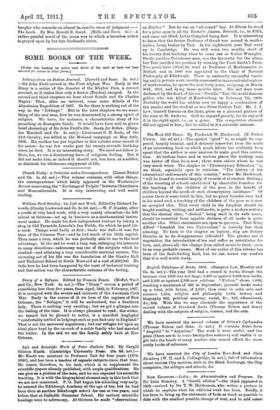 Life and Scientific Work of Peter Guthrie Tait. By Cargill

Gilston Knott (Cambridge University Press. 10s. 8d. net.)— Mr. Knott was assistant to Professor Tait for four years (1879- 1883), and has been a teacher of cognate subjects since that time. He comes, therefore, to his task, which is to supplement the scientific papers already published, with ample qualifications. He can give us a picture of the man, and he can expound his scientifie teaching. It is with the biographical element only in this book that we are now concerned. P. G. Tait began his schooling very early: he entered the Edinburgh Academy at the age of ten, but he had been then at another Edinburgh school for one or two years, and before that at Daikeith Grammar School. His earliest scientific leanings were to astronomy. At thirteen he made "observations on Jupiter." But he Was an "all-round" boy. At fifteen he stood for a prize open to all the Rector's classes, Seventh, i.e., to Fifth, and came out third, Lewis Campbell being first. It is interesting to know that the future Professor of Greek was second in mathe- matics, being beaten by Tait. In his eighteenth year Tait went up to Cambridge. He was still some two months short of his twenty-first birthday when he came out as Ssnior Wrangler. Steele, another Peterhouse man, was the favourite for the place, but Tait justified his position by winning the First Smith's Prize. Two years later (1854) he went as Professor of Mathematics to Belfast, and in 1860 was appointed to the Chair of Natural Philosophy at Edinburgh. There in eminently successful teach- ing and in private work, mostly concerned in transcendental regions of mathematics, he spent the next forty years, resigning on March 30th, 1901, and dying three months later. His last days were darkened by the death of his son " Freddie" Tait, the world-famous golfer, who was killed at Koodoosberg on February 7th, 1900. Probably the world has seldom seen so happy a combination of the master and the student as was Peter Guthrie Tait. Mr. J. J. Low, himself famous on the links, gives us a pleasant picture of the man at St. Andrews. Golf ho enjoyed greatly, for he enjoyed it in the right spirit, i.e., as a game. The competitive element did not appeal to him ; but he added to it a scientific interest.