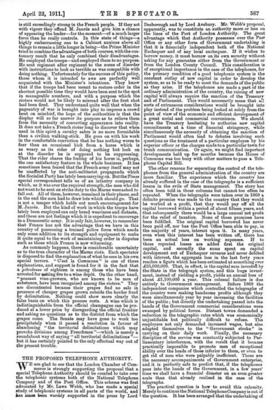 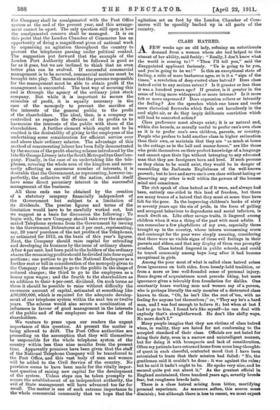 WE are glad to see that the London Chamber of Com- merce is strongly supporting the proposal that a special Telephone Authority should be created to take over the telephonic systems both of the National Telephone Company and of the Post Office. This scheme was first advocated by Mr. Laws Webb, who has made a special study of telephonic systems in all parts of the world, and has since been warmly supported in the press by Lord Desborough and by Lord Avebury. Mr. Webb's proposal, apparently, was to constitute an authority more or less on the lines of the Port of London Authority. The great advantage which that Authority possesses over the Post Office or any other form of Government undertaking is that it is financially independent both of the National Exchequer and of any local exchequer. If it wishes to borrow money, it must borrow on its own security without asking for any guarantee either from the Government or from the London County Council. This consideration is of exceptional importance in the case of the telephones, for the primary condition of a good telephonic system is the constant outlay of new capital in order to develop the system, so as to be ready to meet the demands of the public as they arise. If the telephones are made a part of the ordinary administration of the country, the raising of new capital will always require the sanction of the Treasury and of Parliament. This would necessarily mean that all sorts of extraneous considerations would be brought into play instead of the problem being looked at solely from the point of view of the economic and efficient development of a great social and commercial convenience. We should have the Treasury hesitating to authorise new capital commitments at a time of financial stringency, while simultaneously the necessity of obtaining the sanction of Parliament would often lead to debates involving such questions as the treatment of a particular employee by his superior officer or the charges made to a particular town for trunk communication. Or again, we might find important developments held up for months because the House of Commons was too busy with other matters to pass a Tele- phone Capital Bill.

The other reasons for separating the control of the tele- phones from the general administration of the country are more familiar. The experience which the country has already suffered in the case of the telegraphs is a sufficient lesson in the evils of State management. The story has often been told in these columns but cannot too often be repeated. When the telegraphs were taken over in 1869 a definite promise was made to the country that they would be worked at a profit, that they would pay off all the capital borrowed within a period of about fifteen years, and that subsequently there would be a large annual net profit for the relief of taxation. None of these promises have been fulfilled. The original capital borrowed has never been paid off, nor has the Post Office been able to pay, in the majority of years, interest upon it. In many years, even when this interest has been written off, there has been an actual loss on working expenses. If to these repeated losses are added first the original capital, and secondly the sums spent on capital development out of Exchequer revenue and never debited with interest, the aggregate loss in the last forty years reaches a figure which has been estimated at something over £35,000,000. That, in effect, is the capital sum invested by the State in the telegraph system, and this huge invest- ment, instead of yielding a profit, yields an annual loss of about £1,100,000 a year. This colossal failure is due entirely to Government management. Before 1869 the independent companies which controlled the telegraphs of the country were making handsome profits although they were simultaneously year by year increasing the facilities of the public ; but directly the undertaking passed into the hands of the Government commercial considerations were swamped by political forces. Distant towns demanded a reduction in the telegraphic rates which was economically unjustifiable but politically difficult to refuse. The employees not only demanded increased wages, but also adapted themselves to the " Government stroke" in carrying on their daily work. Finally, the necessary discipline of the service was constantly subjected to Par- liamentary interference, with the result that it became practically impossible to promote men of exceptional ability over the heads of those inferior to them, or even to get rid of men who were palpably inefficient. These are the necessary accompaniments of Government enterprise, and it is perfectly safe to predict that, if the telephones pass into the hands of the Government, in a few years' time we shall have a financial disaster on an even greater scale than that already realised in the case of the telegraphs.

The practical question is how to avoid this calamity. Merely to continue the National Telephone Company is out of the question. It has been arranged that the undertaking of tie Company shall be amalgamated with the Post Office system at the end of the present year, and this arrange- ment cannot be upset. The only question still open is how the amalgamated concern shall be managed. It is on this point that the London Chamber of Commerce has an opportunity of doing a magnificent piece of national work by organising an agitation throughout the country to prevent the telephones passing under political control. The suggestion put forward that the example of the London Port Authority should be followed is good as far as it goes, but we are inclined to think that an even better plan can be evolved. If successful commercial management is to be secured, commercial motives must be brought into play. That means that the persons responsible for the management must be able to obtain profit if the management is successful. The best way of securing this end is through the agency of the ordinary joint stock company. But while it is important to secure the stimulus of profit, it is equally necessary in the case of the monopoly to prevent the sacrifice of the interests of the general public to the profit of the shareholders. The ideal, then, is a company so controlled as regards the division of its profits as to harmonise the interests of the public with those of the shareholders. A further element which ought not to be omitted is the desirability of giving to the employees of the undertaking some consideration for efficient service over and above their ordinary salaries. The advantage of this method of remunerating labour has been fully demonstrated by the success of the profit-sharing scheme introduced by the l ate Sir George Livesey into the South Metropolitan Gas Com- pany. Finally, in the case of an undertaking like the tele- phones, covering the whole area of the kingdom and neces- sarily affecting an enormous number of interests, it is desirable that the Government, as representing, however im- perfectly, the collective will of the nation, should itself have some direct pecuniary interest in the successful management of the business.

All these ends can be obtained by the creation of a statutory company financially independent of the Government but subject to a limitation of its dividends. The precise figures and terms of the limitation would have to be carefully worked out, but we suggest as a basis for discussion the following : To begin with, the new Company should take over the amalga- mated Telephone systems from the Government by issuing to the Government Debentures at 3 per cent., representing, say, 20 years' purchase of the net profits of the Telephones, as estimated for 1912, on the basis of this year's figures. Next, the Company should raise capital for extending and developing its business by the issue of ordinary shares. After 4 per cent. had been paid to the holders of the ordinary shares the remaining profits should be divided into four equal portions ; one portion to go to the National Exchequer as a further rent or toll in consideration of the monopoly given to the Company ; the second to go to the public in the shape of reduced charges ; the third to go to the employees as a, bonus upon wages ; and the fourth to the shareholders as an addition to their 4-per-cent. dividend. On such terms as these it should be possible to raise without difficulty the enormous amount of capital, estimated at something like A:90,000,000, which is required for the adequate develop- ment of our telephone system within the next ten or twelve years. The scheme would also secure a combination of influences in favour of good management in the interests of the public and of the employees no less than of the shareholders.

We venture to press upon our readers the urgent importance of this question. At present the matter is being allowed to drift. The Post Office authorities are proceeding on the assumption that they will themselves be responsible for the whole telephone system of the country within less than nine months from the present time. Apparently promises have been given that the staff of the National Telephone Company will be transferred to the Post Office, and this vast body of men and women will be added to the Civil Service of the country. No provision seems to have been made for the vitally impor- tant question of raising new capital for the development of the system. Unless steps can be taken promptly to secure the establishment of an independent authority, the evil of State management will have advanced too far for recall. The matter is one of such extreme importance to the whole commercial community that we hope that the agitation set on foot by the London Chamber of Com- merce will be speedily backed up in all parts of the country.