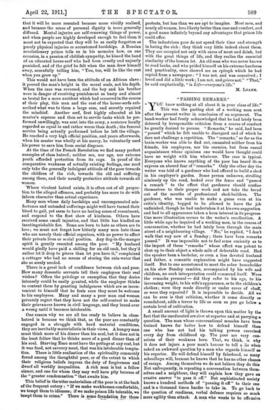 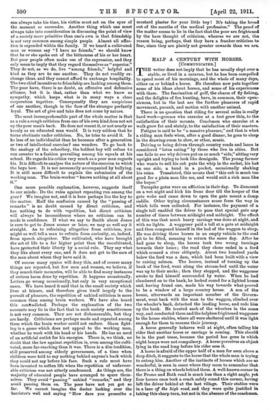 YOU know nothing at all about it in your class of life." This was the parting shot of a working man sent after the present writer in conclusion of an argument. The hand-worker had freely acknowledged that he bad lately been deterred by irresponsible criticism from a course of conduct he greatly desired to pursue. " Remarks," he said, had been "passed" which he felt unable to disregard and of which he dare not challenge a repetition. The " remarks," so far as the brain-worker was able to find out, emanated neither from his friends, his employers, nor his enemies, but from casual acquaintance whose opinions one would have thought could have no weight with him whatever. The case is typical. Everyone who knows anything of the poor has heard the in express an absurd fear of "remarks." Only the other day the writer was told of a gardener who had offered to build a shed in his employer's garden. Some person unknown, strolling aimlessly up the road, looked over the fence and "passed a remark " to the effect that gardeners should confine themselves to their proper work and not take the bread out of the mouths of professional shed-builders. The gardener, who was unable to make a guess even at his critic's identity, begged to he allowed to leave the job unfinished, though he had undertaken it at his own suggestion and had to all appearance taken a keen interest in its progress. One more illustration occurs to the writer's recollection. A little while ago he inquired of a working man, in the course of conversation, whether he had lately been through the main street of a neighbouring village. "No," he replied, "I don't

walk that way now of a Sunday ; there have been remarks passed." It was impossible not to feel some curiosity as to the import of these " remarks " whose effect was potent to shut up to their object a whole mile of delectable road. Had the speaker been a bachelor, or even a less devoted husband and father, a romantic explanation might have suggested itself. But to one accustomed to meet the sober householder on his slow Sunday rambles, accompanied by his wife and children, no such interpretation could commend itself. Were the remarks personal — did they refer to his age, to his increasing weight, to his wife's appearance, or to the children's clothes ; were they made directly or under cover of chaff, or were they repeated ? It is impossible to decide. All we can be sure is that criticism, whether it come directly or roundabout, adds a terror to life as soon as you go below a certain level of cultivation.

A small amount of light is thrown upon this matter by the fact that the uneducated are slow at repartee and at parrying a question. The man whose conversational muscles have been trained knows far better how to defend himself than one who has not had his talking powers exercised every day from childhood up. The poor are very con- scious of their weakness here. That, we think, is why it does not injure a poor man's honour to tell a lie when asked an awkward question by a man who regards himself as his superior. He will defend himself by falsehood, as many schoolboys will, because he knows that he has no other chance of escape. Among themselves we do not believe they do this Not unfrequently, in repeating a conversation between them- selves and a neighbour, they will explain how they gave an evasive answer "to pass it off." But sophisticated society knows a hundred methods of "passing it off " to their one and is a thousand times harder to take in. To go back to the question of readiness, verbal defence requires so muck more agility than attack. A man who wants to be offensive

can always take his time, his victim must act on the spur of the moment or surrender. Another thing which one must always take into consideration in discussing the point of view of a society more primitive than one's own is that friendship is not very common among simple people. Almost all affec- tion is expended within the family. If we heard a cultivated man or woman say " I have no friends," we should know that be or she spoke out of the bitterness of his or her heart. But poor people often make use of the expression, and they only mean to imply that they regard themselves as " superior." They do not, as we do, live "among friends," helpful and kind as they are to one another. They do not readily ex- change ideas, and they cannot afford to exchange hospitality. The two chief incentives to friendship are lacking among them. The poor have, there is no doubt, an offensive and defensive alliance, but it is that, rather than what we know as sympathy, which keeps what is in many ways a close corporation together. Consequently they are suspicious of one another, though in the face of the stranger perfectly loyal. The art of give and take does not come by nature.

The most incomprehensible part of the whole matter is that as a rule a rough criticism from one of his own kind does not set up the poor man's back. He does not resent it, or not nearly so keenly as an educated man would. It is very seldom that he turns obstinate under criticism. No, he tries to avoid it. Is he less of an individualist than he becomes after a generation or two of intellectual exercise ? one wonders. To go back to the analogy of the schoolboy, the boldest boy will refuse t o run counter to a fashion prevailing among his equals at his school. He regards his critics very much as a poor man regards his. It is difficult to analyse the nature of the coercion to which the boys bow. It is not necessarily accompanied by bullying. It is still more difficult to explain the submission of the working man. The brain-worker " knows nothing at all about it.

One more possible explanation, however, suggests itself to our minds : Do the rules against repeating run among the poor ? We imagine not, and it is here perhaps lies the key to the matter. Half the confusion caused by the " passing of remarks " is no doubt caused by direct criticism, and has nothing to do with repetition, but direct criticism will always be inconsiderate where no criticism can be made in confidence. If what we say to Smith about Jones is sure to get to Jones sooner or later, we may as well say it straight. As to refraining altogether from criticism, you might as well tell a man to refrain from curiosity, or, indeed, from speech altogether. The cultivated, who have brought the art of life to a far higher point than the uncultivated, have protected their liberty by a social rule. They say what they like about every one, and it does not get to the ears of the man about whom they have said it.

Of course many cynics will deny this, and of course many things are repeated, but few men and women, we believe, if they search their memories, will be able to find many instances of serious harm done by repetition. It happens occasionally. Letters go wrong occasionally, but only in very exceptional cases. We have heard it said that in the small society which lives at leisure, and therefore gives itself largely to the pursuit of pleasure, the repetition of unkind criticism is more common than among brain workers. We have also heard this contradicted. Perhaps the explanation of the two accounts may lie in the fact that in such society sensitiveness is not very common. They are not dishonourable, but they are hardy. Criticisms are perhaps made and repeated among them which the brain worker could not endure. Sham fight- ing is a game which does not appeal to the working man, whether he work with his head or his hands. He has no need of an artificial outlet for his energies. There is, we think, no doubt that the law against repetition is, even among the culti- vated, more far-reaching than it was. There is a dim tradition, still preserved among elderly governesses, of a time when children were told to say nothing behind anyone's back which they could not say before his face. Such a rule must have been invented to soften life when the repetition of unfavour- able criticism was not utterly condemned. As things are, the majority of educated people have arranged to spare them- selves. They avoid " passing" unkind " remarks," and they avoid passing them on. The poor have not yet got so far. We cannot imagine the doctor looking over the barrister's wall and saying " How dare you prescribe a

mustard plaster for your little boy ! It's taking the bread out of the mouths of the medical profession." The proof of the matter seems to lie in the fact that the poor are frightened by the bare thought of criticism, whereas we are not, the reason being, perhaps, that they have a franker criticism to fear, since they are plainly not greater cowards than we are.