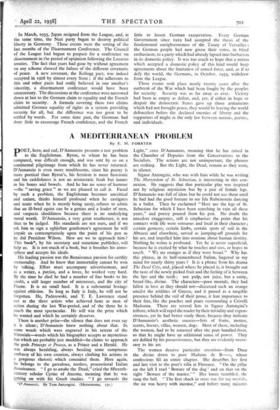 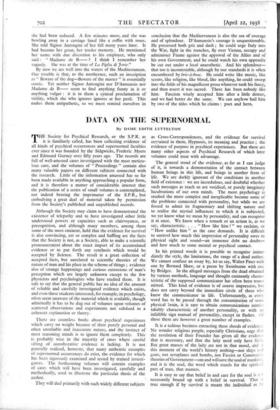 POET, hero, and cad, D'Annunzio presents a test problem to the Englishman. Byron, to whom he has been compared, was difficult enough, and was sent by us on a continental pilgrimage from which he has never returned. D'Annunzio is even more troublesome, since his poetry is more poetical than Byron's, his heroism is more histrionic and his caddishness is not an aristocratic freak but innate in his bones and bowels. And he has no sense of humour —the " saving grace " as we are pleased to call it. Faced. by such a problem, the Englishman becomes uncritical and unjust, thinks himself profound when he castigates and acute when he is merely being nasty, refuses to admit that an ill-bred egoist can be a genius and a leader of men, and suspects shoddiness because there is no underlying moral worth. D'Annunzio, a very great southerner, is not thus to be judged. His standards are not ours, and if we ask him to sign a suburban gentlemen's agreement he will impale us contemptuously upon the point of his pen as he did President Wilson. How are we to approach him ? This book*, by his secretary and sometime publisher, will help us. It is not-much of a book, but it breathes his atmo- sphere and accepts his ideals.

His leading passion was the Renaissance passion for earthly immortality. And he knew that immortality cannot be won by talking. Effort must accompany advertisement, and as a writer, a patriot, and a lover, he worked very hard. By the time he died he had a number of fine books to his credit, a still larger number of mistresses, and the city of Fiume. It is no small haul. It is a substantial hostage against oblivion. So long as Italy is Italy, he will not be forgotten. He, Paderewski, and T. E. Lawrence stand out as the three artists who achieved fame as men of action during the last War-period, and of the three he is much the most spectacular. He will win the prize which he wanted and which he certainly deserves.

There is another prize—the silence that does not even say it is silent ; D'Annunzio knew nothing about that. In some words which were engraved in his retreat of the Vittoriale--words which his biographer accepts as mysterious but which are probably just muddled—he Halms to approach the gods Princeps et Praeco, as a Prince and a Herald. He was always heralding, always heading some sumptuous embassy of his own creation, always clothing his actions in a gorgeous rhetoric which concealed them. Here again, he belongs to the garrulous, restless, processional Italian Renaissance. " I go to awake the Dead," cried the fifteenth- century scholar Cyriac of Ancona, meaning that he was getting on with his Greek studies. " I go towards the *D'Anttunzio. By Tom Antongini. (Heinemann. 15s.) Light," cries D'Annunzio, meaning that he has ratted in the Chamber of Deputies from the Conservatives to the Socialists. The actions are not unimportant, the phrases are striking. But the Light, the Dead, remain as they were, in silence.

Signor Antongini, who was with him while he was writing The Martyrdom of St. Sebastian, is interesting in this con- nexion. He suggests that that particular play was inspired not by religious mysticism but by a pair of female legs. D'Annunzio was full of ideas but he could not use them until he had had the good fortune to see Ida Rubeinstein dancing in a ballet. Then he exclaimed " Here are the legs of St. Sebastian for which I have been searching in vain all these years," and poetry poured from his pen. No doubt the anecdote exaggerates, still it emphasises the point that his contacts with life were sensuous and local in their character; certain gestures, certain limbs, certain spots of soil in the Abruzzi and elsewhere, served as jumping-off grounds for his art, and impelled him into orations about human destiny. Nothing he writes is profound. Yet he is never superficial, because he is excited by what he touches and sees, or hopes to touch. " We ate oranges as if they were bread." Why has this phrase, in its half-remembered Italian, lingered in my mind for nearly thirty years ? It is a phrase from his drama The Dead City, and, placed where he placed it, it brought out the taste of the newly picked fruit and the feeling of it between the lips and the teeth ; not pulp; not juice, but a unity, bread-like, divine. The characters—poor mortals, they had fallen in love as they should not—discussed such an orange amidst the aridities of Greece, and it passed as a tangible presence behind the veil of their prose, it lent importance to their fate, like the peaches and pears surrounding a Crivelli Madonna. There are several lists in Signor Antongini's tribute, which will repel the reader by their triviality and expen- siveness, yet he had better study them, because they indicate D'Annunzio's aesthetic sources—lists of fruits, mottos, scents, horses, villas, women, dogs. Most of these, including the women, had to be renamed after the poet handled them, so that he might have an additional sense of power. They are defiled by his possessiveness, but they are evidently neces- sary to his art.

The women deserve particular attention—from Duse the divine down to poor Madame de B—, whose confessions fill an entire chapter. She describes her first and last visit to the poet's villa at Florence. " On the pillar on the left I read Beware of the dog' and on that on the right Beware of the master." Her knees trembled, she rang the bell. " The first shock in store was for my nostrils, the air was heavy with incense," and before many minutes she had been seduced. A few minutes more, and she was bowling away in a carriage lined like a coffin with roses. She told Signor Antongini of her fall many years later. It had become her great, her tender memory. He mentioned her name with due discretion to his employer, who only said : " Madame de B— ? I think I remember her vaguely. She was at the time of La Figlia di Jorio."

By now we are well into the waters of the Mediterranean. Our trouble is that, to the northerner, such an inscription as " Beware of the dog—Beware of the master " is essentially comic. Yet neither Signor Antongini nor D'Annunzio nor Madame de B— seem to find anything funny in it or anything vulgar : it is to them a cynical proclamation of virility, which she who ignores ignores at her peril. This makes them antipathetic, so we must remind ourselves in conclusion that the Mediterranean is also the sea of courage and of splendour. D'Annunzio's courage is unquestionable. He possessed both grit and dash ; he could urge Italy into the War, fight in the trenches, fly over Vienna, occupy and administer Fiume against the approval of the Allies and of his own Government, and he could watch his own appendix be cut out under a local anaesthetic. And his splendour— that too is incontestable, although by our standards it is often encumbered by bric-a-brac. He could write like music, like scents, like religion, like blood, like anything, he could sweep into the folds of his magnificent prose whatever took his fancy, and then assert it was sacred. There has been nobody like him. Fascism wisely accepted him after a little demur, and we had better do the same. We can anyhow hail him by two of the titles which he claims : poet and hero.