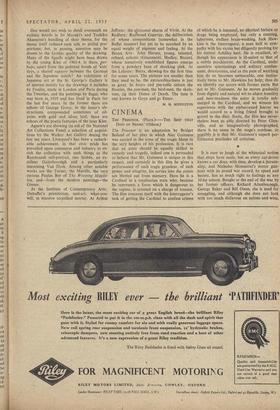 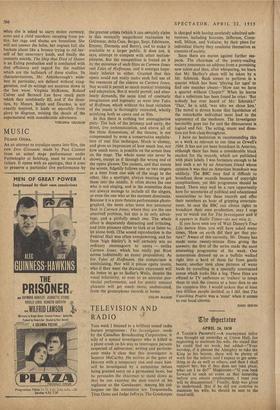 The Prisoner is an adaptation by Bridget Boland of her play in which Alec Guinness was carried in the arms of the tragic Muse to the very heights of his profession. It is rare that an actor should be equally skilled in comedy and tragedy, indeed one is persuaded to believe that Mr. Guinness is unique in this respect, and certainly in this film he gives a performance of such tragic grandeur, of such power and integrity, his sorties into the comic are blotted out from memory. Here he is a Cardinal in a totalitarian state who, because he represents a force which is dangerous to the regime, is arrested on a charge of treason. The film concerns itself with the Interrogator's task of getting the Cardinal to confess crimes of which he is innocent, no physical torture or drugs being employed, but only a cunning, laborious, endless brain-washing. Jack Haw- kins is the Interrogator, a man half in sym- pathy with his victim but diligently probing for his mental Achilles heel. He is excellent, al- though his appearance is ill-suited to that of a subtle psychiatrist. As the Cardinal, under ceaseless questionings and solitary confine- ment, deteriorates, and as the pain of watching him do so becomes unbearable, one instinc- tively turns to Mr. Hawkins for help; thus do we identify our actors with former parts. But ,not so Mr. Guinness. As he moves gradually from dignity and natural wit to abject humility and near-madness the actor is totally sub- merged in the Cardinal, and we witness his experience with the embarrassed horror we would accord to a living friend brought to grovel in the dust. Static, the film has never- theless been so ably directed by Peter Glen- ville, and so imaginatively photographed, there is no sense in the stage's confines, or, possibly it is that Mr. Guinness's superb per- formance precludes all criticism.

It is easy to laugh at the whimsical notion that ships have souls, but as every car-driver knows a car does, with time, develop a Person- ality, and Nicholas Monsarrat's motor gun- boat with its proud war record, its speed and beauty, has as much right to feelings as any 10-hp saloon. Bought at the end of the war by her former officers, Richard Attenborough, George Baker and Bill Owen, she is used for smuggling, and although she does not look with too 'much disfavour on nylons and wine,

when she is asked to carry stolen currency, arms and a child murderer escaping from jus- tice, her rage and shame are boundless. She will not answer the helm, her engines fail, she buckets about like a bronco trying to rid her- self of her unsavoury loads, and finally she commits suicide. The Ship that Died of Shame is an Ealing production and is conducted with that efficiency and regard for the realities which are the hallmark of these studios. Its characterisations, Mr. Attenborough's wide- boy in particular, are defined without exag- geration, and its settings are accurate down to the last wave. Virginia McKenna, Roland Culver and Bernard Lee have small parts which they confidently fill, and if the direc- tion, by Messrs. Relph and Dearden, is not exactly inspired, it leads us smoothly from glory to disgrace, missing the shoals of the supernatural with considerable adroitness.