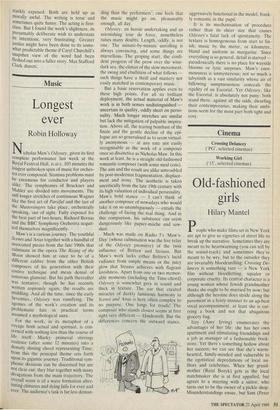 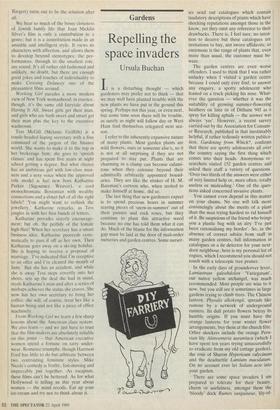 People who make films set in New York are apt to give us vignettes of street life to break up the narrative. Sometimes they are meant to be heartwarming (you can tell by the sound-track) and sometimes they're meant to be wry, but to the outsider they are invariably bloodcurdling. Crossing De- lancey is something rare — a New York film without bloodletting, squalor or corporate cruelty. Its central character is a young woman whose Jewish grandmother thinks she ought to be married by now; but although the heroine does stride along the pavement in a feisty manner to an up-beat vocal accompaniment, at least she is car- rying a book and not that ubiquitous grocery bag.

Izzy (Amy Irving) enumerates the advantages of her life: she has her own apartment and stimulating friendships and a job as manager of a fashionable book- store. Yet there's something hollow about her success; we can see that she's warm- hearted, family-minded and vulnerable to the egotistical depredations of local au- thors and celebrities. When her grand- mother (Reizl Bozyk) gets in the local matchmaker she is at first appalled, but agrees to a meeting with a suitor, who turns out to be the Owner of a pickle shop. Misunderstandings ensue, but Sam (Peter Riegert) turns out to be the solution after all.

We hear so much of the bossy closeness of Jewish family life that Joan Micklin Silver's film is only a contribution to a genre; but it is a contribution made in an amiable and intelligent style. It views its characters with affection, and allows them to develop beyond stereotypes; the per- formances, through to the smallest role, are sound. It's all rather old-fashioned and unlikely, no doubt, but there are enough good jokes and touches of individuality to make Crossing Delancey one of the pleasantest films around.

Working Girl parades a more modern view of New York womanhood; in essence, though, it's the same old fairytale about Having It All. Sweet girls get their man, and girls who are both sweet and smart get their man plus the key to the executive washroom.

Tess McGill (Melanie Griffith) is a tousle-headed lisping secretary with a fine command of the jargon of the finance world. She wants to make it to the top in her brokerage firm; she goes to 'speech classes' and has spent five years at night school getting a degree. But what chance has an ambitious girl with low-class man- ners and a sexy voice when the approved role model is her new boss Katharine Parker (Sigourney Weaver), a cool monochromatic Bostonian with wealthy connections and a closet full of all the right labels? 'You might want to rethink the jewellery,' Katharine remarks, as Tess jangles in with her first bunch of letters.

Katharine provides sisterly encourage- ment; but oh, the perfidy of the female high-flier! When her secretary has a smart business idea, Katharine proceeds syste- matically to pass if off as her own. Then Katharine goes away on a ski-ing holiday. She is hoping to receive a proposalof marriage. 'I've indicated that I'm receptive to an offer and I've cleared the month of June.' But she has an accident, and while she is away Tess steps covertly into her shoes, sets up the deal she had in mind, steals Katharine's man and after a series of mishaps achieves the status she craves. She now has her own secretary to bring her coffee: she will, of course, treat her like a human being and not like a piece of office machinery.

From Working Girl we learn a few sharp lessons about the American class system. We also learn — and we just have to trust that the film-makers are absolutely reliable on this point — that American executive women spend a fortune on tarty under- wear. Romance triumphs, though Harrison Ford has little to do but arbitrate between two contrasting feminine styles. Mike Nicols's comedy is frothy, fast-moving and impeccably put together. As escapism, these films can't be bettered. As for what Hollywood is telling us this year about women — the mind recoils. Eat up your ice-cream and try not to think about it.