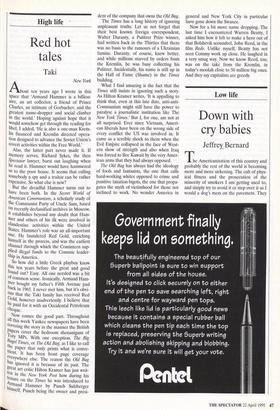 New York About ten years ago I wrote in this space that 'Armand Hammer is a billion- aire, an art collector, a friend of Prince Charles, an intimate of Gorbachev, and the greatest name-dropper and social climber in the world.' Hoping against hope that it would somehow get through the reading for libel, I added, 'He is also a one-man Krem- lin financed and Kremlin directed opera- tion designed to advance the Soviet Union's covert activities within the Free World.'

Alas, the latter part never made it. If memory serves, Richard Sykes, the then Spectator lawyer, burst out laughing when he read it. Hammer would have hammered as to the poor house. It seems that calling somebody a spy and a traitor can be rather expensive. So what else is new?

But the dreadful Hammer turns out to have been both. In the Secret World of American Communism, a scholarly study of the Communist Party of Uncle Sam, based Fal recently declassified archives in Moscow, it establishes beyond any doubt that Ham- mer and others of his ilk were involved in Clandestine activities within the United States. Hammer's role was an all-important °Ile. He laundered Red Gold, enriching himself in the process, and was the earliest Channel through which the Comintern sup- Plied illegal funds to the Commie leader- ship in America.

So how did a little Greek playboy know this ten years before the great and good found out? Easy. All one needed was a bit of common sense. Ironically, Armand Ham- mer bought my father's Fifth Avenue pad back in 1965. I never met him, but it's obvi- ous that the Taki family has received Red Gold, however inadvertently. I believe that Ile paid for it with an Occidental Petroleum cheque. Now comes the good part. Throughout all this week Yankee newspapers have been Covering the story in the manner the British Papers cover the bedroom shenanigans of Tory MPs. With one exception. The Big Eagel Times, or The Old Bag, as I like to call the paper that only prints what is conve- nient. It has been front page coverage hrywhere else. The reason the Old Bag Ignored it is because of its past. The great art critic Hilton Kramer has just writ- Mn in the New York Post how during his tenure on the Times he was introduced to Armand Hammer by Punch Sulzberger himself, Punch being the owner and presi- dent of the company that owns the Old Bag.

The Times has a long history of ignoring unpleasant truths. Let us not forget that their best known foreign correspondent, Walter Duranty, a Pulitzer Prize winner, had written back in the Thirties that there was no basis to the rumours of a Ukrainian famine. Duranty, of course, knew better, and while millions starved by orders from the Kremlin, he was busy collecting his Pulitzer. Incidentally, his name is still up in the Hall of Fame (Shame) in the Times building.

What I find amazing is the fact that the Times still insists in ignoring such a story. As Hilton Kramer writes, 'It is appalling to think that, even at this late date, anti-anti- Communism might still have the power to paralyse a journalistic institution like The New York Times.' But I, for one, am not at all surprised. Ever since Vietnam, Ameri- can liberals have been on the wrong side of every conflict the US was involved in. It came as a terrible shock to them when the Evil Empire collapsed in the face of West- ern show of strength and also when Iraq was forced to flee Kuwait by the very Amer- ican arms that they had always opposed.

The Old Bag has always had the ideology of fools and fantasists, the one that calls hard-working whites opposed to crime and punitive taxation bigots, the one that propa- gates the myth of victimhood for those not inclined to work. No wonder America in general and New York City in particular have gone down the Swanee.

Now for a bit more name dropping. The last time I encountered Warren Beatty, I asked him how it felt to make a hero out of that Bolshevik scoundrel, John Reed, in the film Reds. Unlike myself, Beatty has not seen Commy work up close. He laughed in a very smug way. Now we know Reed, too, was on the take from the Kremlin, in today's moolah close to 50 million big ones. And they say capitalists are greedy.