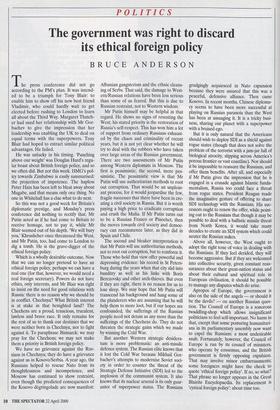 The government was right to discard its ethical foreign policy

The press conference did not go according to the PM's plan. It was intend- ed to be a triumph for Tony Blair: to enable him to show off his new best friend Vladimir, who could hardly wait to get elected before rushing to London to learn all about the Third Way. Margaret Thatch- er had used her relationship with Mr Gor- bachev to give the impression that her leadership was enabling the UK to deal on equal terms with the superpowers. Tony Blair had hoped to extract similar political advantages. He failed.

He was unlucky in his timing. 'Punching above our weight' was Douglas Hurd's regu- lar boast about British foreign policy, and so we often did. But not this week. HMG's pol- icy towards Zimbabwe is easily summarised: the projection of impotence. The hapless Peter Hain has been left to bleat away about Mugabe, and that means only one thing. No one in Whitehall has a clue what to do next.

So this was not a good week for Britain's diplomatic prestige, and Monday's press conference did nothing to rectify that. Mr Putin acted as if he had come to Britain to receive homage, not to pay it, while Mr Blair seemed out of his depth. 'We will bury you,' Khrushchev once threatened the West, and Mr Putin, too, had come to London to dig a tomb. He is the grave-digger of the ethical foreign policy.

Which is a wholly desirable outcome. Now that we can no longer pretend to have an ethical foreign policy, perhaps we can have a real one (for that, however, we would need a real foreign secretary). Powers do not have ethics, only interests, and Mr Blair was right to insist on the need for good relations with Russia: there is no reason why we should be in conflict. Chechnya? What British interest is at stake in that benighted land? The Chechens are a proud, tenacious, truculent, lawless and brave race. It only remains for the rest of us to thank our destinies that we were neither born in Chechnya, nor to fight against it. To paraphrase Bismarck: we may pray for the Chechens; we may not make them a priority in British foreign policy.

We have no grievance against the Rus- sians in Chechnya; they do have a grievance against us in Kosovo/Serbia. A year ago, the Russians helped to rescue Nato from its thoughtlessness and incompetence, and Moscow has continued to show restraint, even though the predicted consequences of the Kosovo degringolade are now manifest: Albanian gangsterism and the ethnic cleans- ing of Serbs. That said, the damage to West- ern/Russian relations have been less serious than some of us feared. But this is due to Russian restraint, not to Western wisdom.

Mr Putin himself may be helpful in that regard. He shows no signs of resenting the West; his stated priority is the restoration of Russia's self-respect. This has won him a lot of support from ordinary Russians exhaust- ed by the chaos and criminality of recent years, but it is not yet clear whether he will try to deal with the robbers who have taken over large areas of the Russian government. There are two assessments of Mr Putin among Western diplomats in Moscow. The first is pessimistic; the second, more pes- simistic. The pessimistic view is that Mr Putin will use authoritarian methods to root out corruption. That would be an unpleas- ant process, for it would jeopardise the few, fragile successes that there have been in cre- ating a civil society in Russia. But it is worth paying a high price to eradicate corruption and crush the Mafia. If Mr Putin turns out to be a Russian Franco or Pinochet, then the moves towards civil society and democ- racy can recommence later, as they did in Spain and Chile.

The second and bleaker interpretation is that Mr Putin will use authoritarian methods, not to root out corruption, but to reinforce it. Those who hold that view offer powerful and depressing evidence: his record in St Peters- burg during the years when that city slid into banditry as well as his links with Boris Berezovsky and other arch-thieves. But even if they are right, there is no reason for us to lose sleep. We may hope that Mr Putin will transcend his background and hang some of the plunderers who are assuming that he will help them to more loot, but if our hopes are confounded, the sufferings of the Russian people need not detain us any more than the sufferings of the Chechens do. They do not threaten the strategic gains which we made by winning the Cold War.

But another Western strategic desidera- tum is more problematic: an anti-missile defence system. The Russian elite knows that it lost the Cold War because Mikhail Gor- bachev's attempts to modernise Soviet soci- ety in order to counter the threat of the Strategic Defense Initiative (SDI) led to the implosion of the communist system. It also knows that its nuclear arsenal is its only guar- antor of superpower status. The Russians grudgingly acquiesced in Nato expansion because they were assured that this was a peaceful, defensive alliance. Then came Kosovo. In recent months, Chinese diploma- cy seems to have been more successful at playing on Russian paranoia than the West has been at assuaging it. It is a tricky busi- ness, sharing our planet with a superpower with a bruised ego.

But it is only natural that the Americans should wish to deploy SDI as a shield against rogue states (though that does not solve the problem of the terrorist with a jam-jar full of biological atrocity, slipping across America's porous frontier or vast coastline). Nor should it be impossible to reassure the Russians, and offer them benefits. After all, and especially if Mr Putin gives the impression that he is engaged in a crusade against Islamic funda- mentalism, Russia too could face a threat from rogue states. President Reagan made the imaginative gesture of offering to share SDI technology with the Russians. His suc- cessors ought to renew the offer, while point- ing out to the Russians that though it may be possible to deal with a ballistic missile threat from North Korea, it would take many decades to create an SDI system which could neuter the Russian nukes.

Above all, however, the West ought to adopt the right tone of voice in dealing with the Russians. If they feel derided, they will become aggressive. But if they are welcomed into collective security, given constant reas- surances about their great-nation status and about their cultural and spiritual role in European civilisation, it should be possible to manage any disputes which do arise.

Apropos of Europe, the government is also on the side of the angels — or should it be the devils? — on another Russian ques- tion. The Council of Europe is a sonorous twaddling-shop which allows insignificant politicians to feel self-important. No harm in that, except that some posturing humanitari- ans in its parliamentary assembly now want to expel the Russians: a most undesirable snub. Fortunately, however, the Council of Europe is run by its council of ministers, who operate by consensus, and the British government is firmly opposing expUlsion. That may involve minor embarrassments; some foreigners might have the cheek to quote 'ethical foreign policy'. If so, so what? That phrase no longer appears in the Great Blairite Encyclopaedia. Its replacement is `cynical foreign policy': about time too.