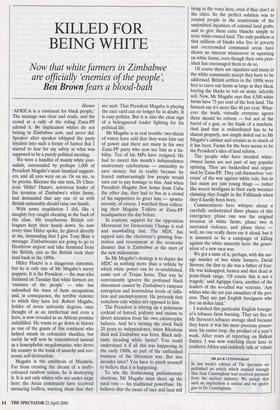 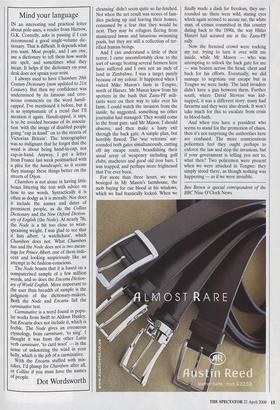 KILLED FOR BEING WHITE

Now that white farmers in Zimbabwe are officially 'enemies of the people,

Harare `AFRICA is a continent for black people.' The message was clear and crude, and the crowd at a rally of the ruling Zanu-PF adored it. By implication whites do not belong in Zimbabwe now, and never did. Speaker after speaker whipped the party loyalists into such a frenzy of hatred that I started to fear for my safety at what was supposed to be a purely political meeting.

We were a handful of mainly white jour- nalists, surrounded by perhaps 1,000 of President Mugabe's most fanatical support- ers, and all eyes were on us. Or on me, to be precise. Because the star turn, Dr Chen- jerai 'Hitler' Hunzvi, notorious leader of the invasion of Zimbabwe's white farms, had demanded that any one of us with British nationality should raise our hands.

With some trepidation I did, like a naughty boy caught cheating at the back of the class. My treacherous British col- leagues kept their hands down. So now every time Hitler spoke, he glared directly at me, demanding that I give Tony Blair a message: Zimbabweans are going to go to Heathrow airport and take farmland from the British, just as the British took their land back in the 1890s.

Hitler Hunzvi is a dangerous extremist, but he is only one of Mr Mugabe's merry puppets. It is the President — the man who declared on Tuesday that white farmers are `enemies of the people' — who has unleashed the wave of farm occupations and, in consequence, the terrible violence to which they have led. Robert Mugabe, holder of seven university degrees, once thought of as an intellectual and even a hero, is now revealed as an African promise unfulfilled. He wants to go down in history as one of the giants of this continent who helped smash its colonialist shackles, but surely he will now be remembered instead as a homophobic megalomaniac, who drove his country to the brink of anarchy and eco- nomic self-destruction.

Mugabe is the antithesis of Mandela. Far from creating the dream of a multi- coloured rainbow nation, he is destroying it. It is not only whites who are under siege here: the Asian community have received menacing leaflets, warning them that they are next. That President Mugabe is playing the race card can no longer be in doubt. It is easy politics. But it is also the clear sign of a beleaguered leader fighting for his political life.

Mr Mugabe is in real trouble: two-thirds of voters have said that they want him out of power and there are many in his own Zanu-PF party who now see him as a lia- bility. Ten of his MPs have resigned. He had to cancel this month's independence anniversary celebrations — ostensibly to save money, but in reality because he feared embarrassingly few people would turn out to pay homage to him. And when President Mugabe flew home from Cuba the other day, they had to bus in a crowd of his supporters to greet him — sponta- neously, of course. I watched them collect- ing their Mugabe T-shirts at Zanu-PF headquarters the day before.

In contrast, support for the opposition Movement for Democratic Change is real and snowballing fast. The MDC has tapped into the electorate's growing frus- tration and resentment at the economic disaster that is Zimbabwe at the start of the new millennium.

So Mr Mugabe's strategy is to depict the MDC as nothing more than a vehicle by which white power can be re-established, some sort of Trojan horse. That way he conveniently ignores the profound black discontent caused by Zimbabwe's rampant corruption and horrendous levels of infla- tion and unemployment. He pretends that somehow only whites are opposed to him.

The President is stirring up a poisonous cocktail of hatred, jealousy and racism to divert attention from his own catastrophic failures. And he's turning the clock back 20 years to independence, when Rhodesia died and Zimbabwe was born. Black mili- tants invading white farms? You could understand it if all this was happening in the early 1980s, as part of the unfinished business of the liberation war. But two decades later? You have to pinch yourself to believe that it is happening.

To win the forthcoming parliamentary elections, Mr Mugabe must shore up the rural vote — his traditional powerbase. He believes that the issues of race and land still bring in the votes here, even if they don't in the cities. So the perfect solution was to remind people in the countryside of the undoubted injustices of colonial land grabs, and to give them carte blanche simply to seize white-owned land. The only problem is that millions of blacks who live in poverty and overcrowded communal areas have shown no interest whatsoever in squatting on white farms, even though their own pres- ident has encouraged them to do so.

Of course there are injustices and many in the white community accept they have to be addressed. British settlers in the 1890s were free to carve out farms as large as they liked, leaving the blacks to toil on stony, infertile soil. Now, Mr Mugabe says that 4,500 white farms have 75 per cent of the best land. The farmers say it's more like 40 per cent. What- ever the truth, virtually everyone agrees there should be reform — but not at the barrel of a gun, or the blade of a machete. And land that is redistributed has to be shared properly, not simply doled out to Mr Mugabe's cabinet and cronies as so much of it has been. Farms for the boys seems to be the President's idea of land reform.

The people who have invaded white- owned farms are not part of any popular uprising. They are bankrolled and organ- ised by Zanu-PF. They call themselves 'vet- erans' of the war against white rule, but in fact many are just young thugs — rather like soccer hooligans in their early twenties claiming they fought in the Falklands when they'd hardly been born.

Commentators here whisper about a carefully orchestrated three phases of this emergency: phase one was the original invasion of white farms, phase two is increased violence, and phase three well, no one really dares say it aloud, but it is assumed to be a campaign of killing against the white minority here: the gener- ation of a new race war.

We got a taste of it, perhaps, with the sav- age murder of two white farmers. David Stevens, the first to die was a father of four. He was kidnapped, beaten and shot dead at point-blank range. 'Of course this is not a tragedy,' said Agrippa Gava, another of the leaders of the so-called war veterans. 'Any whites who die are just casualties of the pro- cess. They are just English foreigners who live on stolen land.'

I watched this particular English foreign- er's tobacco farm burning. They set fire to Mr Stevens's tobacco storage shed because they knew it was his most precious posses- sion: his entire crop, the product of a year's work. After years of reporting on Balkan flames, I was now watching them here in southern Africa and suddenly talk of 'ethnic cleansing' didn't seem quite so far-fetched. Not when the net result was scores of fam- ilies packing up and leaving their homes, consumed by a fear that they would be next. They may be refugees fleeing from manicured lawns and luxurious swimming pools, but they are still a collection of ter- rified human beings.

And I can understand a little of their terror. I came uncomfortably close to the sort of savage beating several farmers here have suffered and I own not an inch of land in Zimbabwe. I was a target purely because of my colour. It happened when I visited Mike Mason's farm in Tengwe, north of Harare. Mr Mason knew from his spotters in the bush that Zanu-PF mili- tants were on their way to take over his farm. I could watch the invasion from the inside, he suggested, something no other journalist had managed. They would come to the front gate, said Mr Mason. I should observe, and then make a hasty exit through the back gate. A simple plan, but horribly flawed. The 'war veterans' sur- rounded both gates simultaneously, cutting off my escape route, brandishing their usual array of weaponry including golf clubs, machetes and good old iron bars. I was trapped, and perhaps more frightened that I've ever been.

For more than three hours, we were besieged in Mr Mason's farmhouse, the mob baying for our blood at his windows, which we had frantically locked. When we finally made a dash for freedom, they sur- rounded us: there were wild, staring eyes which again seemed to accuse me, the white man, of crimes committed in this country dating back to the 1890s, the way Hitler Hunzvi had accused me at the Zanu-PF rally.

Now the frenzied crowd were rocking my car, trying to turn it over with me inside, while Mr Mason — who was attempting to unlock the back gate for me — was beaten across the head, chest and back for his efforts. Eventually, we did manage to negotiate our escape but in Tengwe we were lucky. The land invaders didn't have a gun between them. Further south, where David Stevens was kid- napped, it was a different story: many had firearms and they were also drunk. It won't take much for this to escalate from crisis to blood-bath.

And when you have a president who seems to stand for the promotion of chaos, then it's not surprising the authorities here are confused. The more conscientious policemen feel they ought perhaps to enforce the law and stop the invasions, but if your government is telling you not to, what then? Two policemen were present when we were attacked in Tengwe: they simply stood there, as though nothing was happening — as if we were invisible.