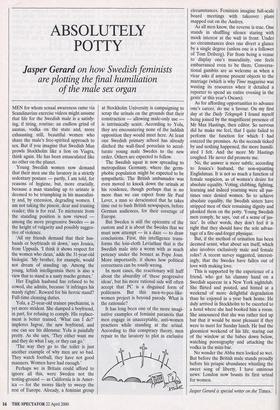 Jasper Gerard on how Swedish feminists

are plotting the final humiliation of the male sex organ

MEN for whom sexual awareness came via Scandinavian exercise videos might assume that life for the Swedish male is a satisfy- ing, if tiring, routine: an endless grind of saunas, vodka on the state and, more exhausting still, beautiful women who share the male's free-spirited approach to sex, But if you imagine that Swedish Man prowls Stockholm like a lion on Viagra, think again. He has been emasculated like no other on the planet.

Young Swedish women now demand that their men use the lavatory in a strictly sedentary posture — partly, I am told, for reasons of hygiene, but, more crucially, because a man standing up to urinate is deemed to be triumphing in his masculini- ty and, by extension, degrading women. I am not taking the pissoir, dear and trusting reader; this is for real. To micturate from the standing position is now viewed among the more progressive Swedes — as the height of vulgarity and possibly sugges- tive of violence.

`All my friends demand that their hus- bands or boyfriends sit down,' says Jessica, from Uppsala. 'I think it shows respect for the women who clean,' adds the 31-year-old biologist. 'My brother, for example, would not dream of standing up. Among the young, leftish intelligentsia there is also a view that to stand is a nasty macho gesture.'

Her English husband has refused to be cowed, she admits, because 'it infringes his manly rights'. Reward for his heroic stand? Full-time cleaning duties.

Yola, a 25-year-old trainee psychiatrist, is yet more strident. She dumped a boyfriend, in part, for refusing to comply. His replace- ment is better trained. 'What can I do?' implores Ingvar, the new boyfriend, and one can see his dilemma: Yola is painfully pretty. As she says, 'They either want me and they do what I say, or they can go.'

`The way they go to the toilet is just another example of why men are so bad. They watch football, they have not good manners. Women have had enough.'

Perhaps we in Britain could afford to ignore all this, were Sweden not the testing-ground — as California is in Amer- ica — for the mores likely to sweep the rest of Europe. Already, a feminist group at Stockholm University is campaigning to scrap the urinals on the grounds that their construction — allowing male-only use is intrinsically sexist. According to Yola, they are encountering none of the laddish opposition they would meet here. At least one Swedish primary school has already ditched the wall-fixed porcelain to accul- turate young male Swedes to the new order. Others are expected to follow.

The Swedish squat is now spreading to metropolitan Germany, where the germ- phobic population might be expected to be sympathetic. The British ambassador was even moved to knock down the urinals at his residence, though perhaps that is no more than we can expect from Sir Paul Lever, a man so deracinated that he takes time out to bash. British newspapers, before German audiences, for their coverage of Europe.

But Sweden is still the epicentre of the custom and it is about the Swedes that we must now attempt — in a daze — to draw conclusions. First, this intelligence trans- forms the loin-cloth Leviathan that is the Swedish male into a worm with as much potency under the bonnet as Pope Joan. More importantly, it shows how political correctness can be totally wrong.

In most cases, the reactionary will huff about the absurdity of 'these progressive ideas', but his more rational side will often accept that PC is a disguised form of politeness. But this men-to-pee-like- women project is beyond parody. What is the rationale?

It has long been one of the more imagi- native examples of feminist paranoia that men engage in unacceptable, anti-women practices while standing at the urinal. According to this conspiracy theory, men repair to the lavatory to plot in exclusive circumstances. Feminists imagine full-scale board meetings with takeover plans mapped out on the Andrex.

As all men know, the reverse is true. One stands in shuffling silence staring with mock interest at the wall in front. Under no circumstances does one divert a glance by a single degree (unless one is a follower of Tom Driberg). Far from being a venue to display one's masculinity, one feels embarrassed even to be there. Conversa- tional gambits are as welcome as when a vicar asks if anyone present objects to the marriage (which is why Time magazine was wasting its resources when it detailed a reporter to spend an entire evening in the gents' at this year's Oscars).

As for affording opportunities to advance one's career, do me a favour. On my first day at the Daily Telegraph I found myself being joined by the magnificent presence of Mr Max Hastings, then editor. So nervous did he make me feel, that I quite failed to perform the function for which I had entered the premises. As the seconds ticked by and nothing happened, the more humili- ated I felt. And the more Mr Hastings coughed. He never did promote me.

No, the answer is more subtle, according to Jessica's husband, the non-squatting Englishman. It is not so much a function of female suspicion, as of women's desire for absolute equality. Voting, clubbing, fighting, learning and indeed yearning were all pas- times once denied women. So to achieve absolute equality, the Swedish sisters have stripped men of their remaining dignity and plonked them on the potty. Young Swedish men comply, he says, 'out of a sense of jus- tice'. In other words, they don't feel it is right that they should have the sole advan- tage of a fire-and-forget physique.

But, if the method of urination has been deemed sexist, what about sex itself, which also involves exclusively male and female roles? A recent survey suggested, interest- ingly, that the Swedes have fallen out of love with making love.

This is supported by the experience of a friend, who got his clammy hand on a Swedish squeeze in a New York nightclub. She flirted and pouted, and hinted at a weekend of more delightful degradation than he enjoyed in a year back home. He duly arrived in Stockholm to be escorted to a hotel where she had booked him a room. She announced that she was rather tied up but that it would be most pleasant if they were to meet for Sunday lunch. He had the gloomiest weekend of his life, staring out of the window at the babes down below, watching pornography and attacking the vodka in the mini-bar.

No wonder the Abba men looked so wet. But before the British male stands proudly before his priapic abundance whistling the sweet song of liberty, I have ominous news: London now boasts its first urinal for women.

Jasper Gerard is special writer on the Times.