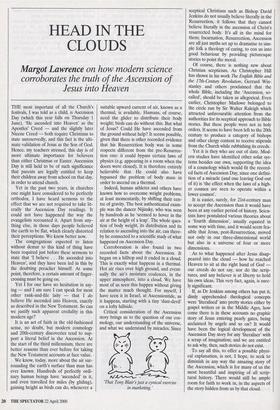 HEAD IN THE CLOUDS

Margot Lawrence on how modem science

corroborates the truth of the Ascension of Jesus into Heaven

THE most important of all the Church's festivals, I was told as a child, is Ascension Day (which this year falls on Thursday 1 June). 'He ascended into Heaven' as the Apostles' Creed — and the slightly later Nicene Creed — both require Christians to state unreservedly, and this fact is the ulti- mate validation of Jesus as the Son of God. Hence, my teachers stressed, this day is of more ultimate importance for believers than either Christmas or Easter. Ascension Day is still held to be of such significance that parents are legally entitled to keep their children away from school on that day, in order to attend church.

Yet in the past two years, in churches one might have considered to be perfectly orthodox, I have heard sermons to the effect that we are not required to take lit- erally the Ascension Day readings. It could not have happened the way the evangelists recounted it. Apart from any- thing else, in those days people believed the earth to be flat, which clearly distorted their perceptions. We know better now.

The congregations expected to listen without demur to this kind of thing have been required just before these sermons to state that 'I believe . . . He ascended into Heaven', and they have been led in this by the doubting preacher himself. At some point, therefore, a certain amount of finger- crossing must be going on.

Yet I for one have no hesitation in say- ing — and I am sure I can speak for most other rank-and-file laity — that I do believe He ascended into Heaven, exactly as described in the New Testament. So can we justify such apparent credulity in this modern age?

It is an act of faith in the old-fashioned sense, no doubt, but modem cosmology and 20th-century discoveries tend to sup- port a literal belief in the Ascension. At the start of the third millennium, there are better reasons than ever before for taking the New Testament accounts at face value.

We know, today, more about the air sur- rounding the earth's surface than man has ever known. Hundreds of perfectly ordi- nary human beings have 'ascended' in it, and even travelled for miles (by gliding), gaining height as birds can do, whenever a suitable upward current of air, known as a thermal, is available. Humans, of course, need the glider to distribute their body weight; birds can do without this. But what of Jesus? Could He have ascended from the ground without help? It seems possible, given that there is other recorded evidence that his Resurrection body was in some respects different from the pre-Resurrec- tion one: it could bypass certain laws of physics (e.g. appearing in a room when the doors were closed). It is therefore entirely believable that He could also have bypassed the problem of body mass in order to ascend on a thermal.

Indeed, human athletes and others have known how to overcome weight problems, at least momentarily, by shifting their cen- tre of gravity. The best authenticated exam- ple was the dancer Nijinsky, who was seen by hundreds as he 'seemed to hover in the air at the height of a leap'. The whole ques- tion of body weight, its distribution and its relation to ascending into the air, can there- by be connected to a scientific study of what happened on Ascension Day.

Corroboration is also found in two recorded facts about the Ascension. It began on a hilltop and it ended in a cloud. This is exactly what happens in a thermal. Hot air rises over high ground, and event- ually the air's moisture coalesces, in the upper atmosphere, into a cloud. We have most of us seen this happen without giving the matter much thought. For myself, I have seen it in Israel, at Ascensiontide, as it happens, starting with a tiny 'dust-devil' on a lofty hillside.

Critical consideration of the Ascension story brings us to the question of our cos- mology, our understanding of the universe, and what we understand by miracles. Since `That Tony Blair's just a cynical exercise in marketing.' sceptical Christians such as Bishop David Jenkins do not usually believe literally in the Resurrection, it follows that they cannot believe literally in the ascension of Christ's resurrected body. It's all in the mind for them; Incarnation, Resurrection, Ascension are all just myths set up to dramatise to sim- ple folk a theology of caring, to con us into good behaviour by providing picturesque stories to point the moral.

Of course, there is nothing new about Christian scepticism. As Christopher Hill has shown in his work The English Bible and the 17th-Century Revolution, Gerrard Win- stanley and others proclaimed that the whole Bible, including the 'Ascension, so- called', should be taken as allegorical. Even earlier, Christopher Marlowe belonged to the circle run by Sir Walter Raleigh which attracted unfavourable attention from the authorities for its sceptical approach to Bible stories. But these people were not in holy orders. It seems to have been left to the 20th century to produce a category of bishops and other clergy content to receive stipends from the Church while rubbishing its creeds.

Yet it is they who are out of date. Mod- ern studies have identified other solar sys- tems besides our own, supporting the idea of a cosmology which would fit the record- ed facts of Ascension Day, since one defini- tion of a miracle (and one leaving God out of it) is 'the effect when the laws of a high- er cosmos are seen to operate within a lower cosmos'.

It is easier, surely, for 21st-century man to accept the Ascension than it would have been at any earlier period of history. Scien- tists have postulated various theories about a 'fourth dimension', usually equated in some way with time, and it would seem fea- sible that Jesus, post-Resurrection, moved not only in our three-dimensional world but also in a universe of four or more dimensions.

As to what happened after Jesus disap- peared into the cloud — how he reached Heaven to sit at the right hand of God our creeds do not say, nor do the scrip- tures, and any believer is at liberty to hold his own ideas. This very fact, again, is sure- ly significant.

If, as Dr Jenkins among others has put it, dimly apprehended theological concepts were literalised' into pretty stories either by gospel writers or in the Middle Ages, how come there is in these accounts no graphic story of Jesus entering pearly gates, being acclaimed by angels and so on? It would have been the logical development of the Ascension Day story for any `literaliser' with a scrap of imagination; and we are entitled to ask why, then, such stories do not exist.

To say all this, to offer a possible physi- cal explanation, is not, I hope, to seek to diminish in any way the amazing story of the Ascension, which is for many of us the most beautiful and inspiring of all scrip- tural history. There would still be ample room for faith to work in, in the aspects of the story hidden from us by that cloud.