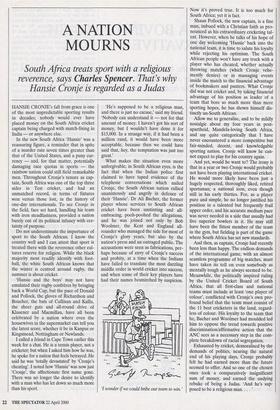 HANSIE CRONJE's fall from grace is one of the most unpredictable sporting results in decades; nobody would ever have placed money on the South Africa cricket captain being charged with match-fixing in India — or anywhere else.

In the new South Africa `Hansie' was a reassuring figure, a reminder that in spite of a murder rate seven times greater than that of the United States, and a puny cur- rency — and, for that matter, potentially damaging race quotas in sports — the rainbow nation could still field remarkable men. Throughout Cronje's tenure as cap- tain, South Africa was one of the top three sides in Test cricket, and had an unmatched record, in terms of fixtures won versus those lost, in the history of one-day internationals. To see Cronje in the field, face set hard, handling his team with iron steadfastness, provided a nation barely out of its political infancy with cer- tainty of purpose.

Do not underestimate the importance of sport to the South African. I know the country well and I can attest that sport is treated there with the reverence other cul- tures reserve for religion. While the black majority most readily identify with foot- ball, the white South African knows that the winter is centred around rugby, the summer is about cricket.

Ilansie and the boys' may not have emulated their rugby confreres by bringing back a World Cup, but the pace of Donald and Pollock, the gloves of Richardson and Boucher, the bats of Cullinan and Kallis, the sheer guts and all-round drive of Klusener and Macmillan, have all been celebrated by a nation where even the housewives in the supermarket can tell you the latest score, whether it be in Kanpur or Kingsmead, Nottingham or Newlands.

I called a friend in Cape Town earlier this week for a chat. He is a tennis player, not a cricketer; but when I asked him how he was, he spoke for a nation that feels betrayed. He said he was 'totally devastated' by `Cronje's cheating'. I noted how `Hansie' was now just `Cronje', the affectionate first name gone. There was no longer the desire to identify with a man who has let down so much more than his sport. `He's supposed to be a religious man, and there is just no excuse,' said my friend. `Nobody can understand it — not for that amount of money. I haven't got his sort of money, but I wouldn't have done it for $15,000. In a strange way, if it had been a million rand, it would have been more acceptable, because then we could have said that, hey, the temptation was just too great.'

What makes the situation even more unforgivable, in South African eyes, is the fact that when the Indian police first claimed to have taped evidence of the telephone conversations which nailed Cronje, the South African nation rallied unanimously and angrily in defence of their `Hansie'. Dr Ali Bacher, the former player whose services to South African cricket have been unstinting and all- embracing, pooh-poohed the allegations, and he was joined not only by Bob Woolmer, the Kent and England all- rounder who managed the side for most of Cronje's glory years, but also by the nation's press and an outraged public. The accusations were seen as fabrications, per- haps because of envy of Cronje's success and probity, at a time when the Indians have failed to translate the most dazzling middle order in world cricket into success, and when some of their key players have had their names besmirched by suspicion.

`I wonder if we could bribe our team to win.' Now it's proved true. It is too much for South Africa; yet it is fact.

Shaun Pollock, the new captain, is a fine man, imbued with a Christian faith as pro- nounced as his extraordinary cricketing tal- ent. However, when he talks of his hope of one day welcoming `Hansie' back into the national team, it is time to salute his loyalty while rejecting his optimism. The South African people won't have any truck with a player who has cheated, whether actually throwing matches (which Cronje vehe- mently denies) or in massaging events inside the match to the financial advantage of bookmakers and punters. What Cronje did was not cricket and, by taking financial advantage of his position as leader of a team that bore so much more than mere sporting hopes, he has shown himself dis- tinctly un-South African.

Allow me to generalise, and to be mildly nostalgic about my four years in post- apartheid, Mandela-loving South Africa, and say quite categorically that I have never encountered a more competitive but fair-minded, decent, and knowledgable sporting nation. Cronje will know he can- not expect to play for his country again.

And yet, would he want to? The irony is that in a year or two Cronje would probably not have been playing international cricket. He would more likely have been just a hugely respected, thoroughly liked, retired sportsman; a national icon, even though still in his early thirties. For, as a player pure and simple, he no longer justified his position in a talented but frequently frail upper order, and his accurate medium pace was never needed in a side that usually had five superior bowlers in it. He may still have been the fittest member of the team in the gym, but fielding is part of the game where South Africa has set new standards.

And then, as captain, Cronje had recently been less than happy. The endless demands of the international game, with an almost seamless programme of big matches, must have taken its toll on even somebody as mentally tough as he always seemed to be. Meanwhile, the politically inspired ruling by the United Cricket Board of South Africa, that all first-class and national teams must include at least 'one player of colour', conflicted with Cronje's own pro- found belief that the team must consist of the 11 best cricketers in the land, regard- less of colour. His loyalty to the team that he, Bacher and Woolmer had moulded led him to oppose the trend towards positive discrimination/affirmative action that the ANC sees as a necessary step in the com- plete breakdown of racial segregation.

Exhausted by cricket, demoralised by the demands of politics, nearing the natural end of his playing days, Cronje probably felt he had earned more than the future seemed to offer. And so one of the chosen ones took a comparatively insignificant sum of money, and earned the undying rebuke of being a Judas. 'And he's sup- posed to be a religious man. . . . '