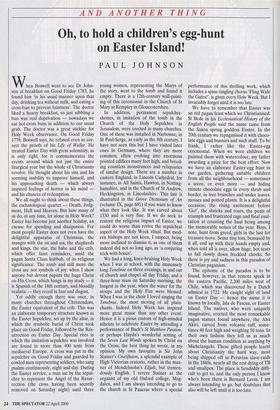 Oh, to hold a children's egg-hunt on Easter Island!

When Boswell went to see Dr John- son at breakfast on Good Friday 1783, he found him `in his usual manner upon that day, drinking tea without milk, and eating a cross-bun to prevent faintness'. The doctor liked a hearty breakfast, so just nibbling a bun was real deprivation — nowadays we eat hot-cross buns in addition to our usual grub. The doctor was a great stickler for Holy Week observance. On Good Friday 1778, Boswell says, he refused even to cor- rect the proofs of his Life of Waller. He treated Easter Day with great solemnity, as is only right, for it commemorates the events around which not just the entire liturgical year but the whole of Christianity revolve. He thought about his sins and his seeming inability to improve himself, and his approaching death — which always inspired feelings of horror in his mind and his chances of redemption.

We all ought to think about these things, the eschatological quartet — Death, Judg- ment, Hell and Heaven. But how many of us do, at any time, let alone in Holy Week? Easter has become just another holiday, an excuse for spending and dissipation. For most people Easter does not even have the delightful apparatus of Christmas, the manger with the ox and ass, the shepherds and kings, the star, the babe and the crib, which offer faint reminders, amid the pagan Santa Claus hubbub, of its religious significance. The tomb and still more the cross are not symbols of joy: when I show anyone but devout papists the huge Christ on His Cross, which hangs in my study — it is Spanish of the 18th century, and bloodily realistic — they recoil in fear and disgust.

Yet oddly enough there was once, in many churches throughout Christendom, the Easter equivalent of the crib. This was an elaborate temporary structure known as the Easter Sepulchre, set up by the altar, in which the symbolic burial of Christ took place on Good Friday, followed by the Res- urrection on Easter Day. Special rites in which the imitation sepulchre was involved are found in more than 400 texts from mediaeval Europe. A cross was put in the sepulchre on Good Friday and guarded by cowled men representing soldiers, who sang psalms continuously, night and day. During the Easter service, a man sat by the sepul- chre to represent the Angel of the Resur- rection (the cross having been secretly removed on Saturday night) until three young women, representing the Marys of the story, went to the tomb and found it empty. There is a 12th-century wall-paint- ing of this ceremonial in the Church of St Mary at Kempley in Gloucestershire.

In addition, permanent sepulchre- shrines, in imitation of the tomb in the Church of the Holy Sepulchre in Jerusalem, were erected in many churches. One of these was installed in Narbonne, in St Paul-Serge, as early as the 4th century. I have not seen this but I have visited later ones in Germany, where they are more common, often evolving into enormous pointed edifices many feet high, and breed- ing countless monstrances and reliquaries of similar design. There are a number in eastern England, in Lincoln Cathedral, for instance, in All Saints, Hawton, in Notting- hamshire, and in the Church of St Andrew, Heckingston, in Lincolnshire. This last is illustrated in the Grove Dictionary of Art (volume IX, page 681) if you want to know what they look like. It was carved about 1330 and is very fine. If we do seek to restore the religious impact of Easter, we could do worse than revive the sepulchral aspect of the Holy Week ritual. But mod- ern bishops are not keen, I suspect, being more inclined to dismiss it, as one of them indeed did not so long ago, as 'a conjuring trick with bones'.

We had a long, knee-bruising Holy Week when I was at school, with the immensely long Tenebrae on three evenings, in and out of church and chapel all day Friday, and a three-hour mass on Saturday morning, the longest in the year, when the water for the stoups and the Holy Fire were blessed. When I was in the choir I loved singing the Tenebrae, the most moving of all plain- chants. Indeed Holy Week has inspired more great music than any other event. Hence it is a pious custom of high-minded atheists to celebrate Easter by attending a performance of Bach's St Matthew Passion, or perhaps Haydn's wonderful setting of the Seven Last Words spoken by Christ on the Cross, the best thing he wrote, in my opinion. My own favourite is Sir John Stainer's Crucifixion, a splendid example of High Victorian oratorio, rather in the man- ner of Mendelssohn's Elijah, but tremen- dously English. I revere Stainer as the organist of my old Oxford college, Mag- dalen, and I am always intending to go to the church in St Pancras where a special performance of this thrilling work, which includes a spine-tingling chorus 'Fling Wide the Gates!', is given every Holy Week. But I invariably forget until it is too late.

We have to remember that Easter was an old pagan feast which we Christianised. St Bede in his Ecclesiastical History of the English People said the name came from the Saxon spring goddess Eostre. In the 20th century we repaganised it with choco- late eggs and bunnies and such stuff. To be frank, I rather like the Easter-egg ceremonial. When we were children we painted them with watercolour, my father awarding a prize for the best effort. Now we have an elaborate Easter-egg hunt in our garden, gathering suitable children from all the neighbourhood — sometimes a score, or even more — and hiding minute chocolate eggs in every shrub and border, in tree branches and under leaves, mosses and potted plants. It is a delightful occasion, the rising excitement before `Go!', the shrieks and roars, the peals of triumph and frustrated rage and final exul- tation at counting the haul being among the memorable noises of the year. Boys, I note, hunt from greed, girls in the lust for treasure-trove. Some tiny tots, bemused by it all, end up with their hands empty and, when told all is over, allow huge, hot tears to fall slowly down freckled cheeks. So there is joy and sadness in this paradox of Christian paganism.

The epitome of the paradox is to be found, however, in that remote speck in the eastern Pacific, 2,200 miles west of Chile, which was discovered by a Dutch admiral in 1722. He caught sight of land on Easter Day — hence the name it is known by locally, Isla de Pascua, or Easter Island. The natives, who were uniquely imaginative, erected the most remarkable pagan statues found anywhere, the Ahu Akivi, carved from volcanic tuff, some- times 40 feet high and weighing 50 tons. In their own fashion they tell us as much about the human condition as anything by Michelangelo. These gifted people learnt about Christianity the hard way, most being shipped off in Peruvian slave-raids in the 1860s, nearly all the rest dying of TB and smallpox. The place is fiendishly diffi- cult to get to, and the only person I know who's been there is Bernard Levin. I am always intending to go, but doubtless that also will be left until it is too late.