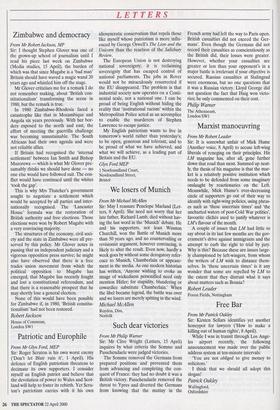 We losers of Munich

From Mr Michael McAllen Sir: May I reassure Penelope Marland (Let- ters, 8 April). She need not worry that her late father, Richard Lamb, died without hav- ing the last word in the 'Munich' debate. He and his supporters, not least Winston Churchill, won the Battle of Munich more than 50 years ago, and no countervailing or revisionist argument, however convincing, is likely to alter the result. Even now, hardly a week goes by without some derogatory refer- ence to Munich, Chamberlain or appease- ment in the media. As one modern historian has written, 'Anyone wishing to evoke an image of wickedness personified need only mention Hitler; for stupidity, blundering or cowardice substitute Chamberlain.' When the libel became legend, the battle was over and we losers are merely spitting in the wind. Michael McAllen