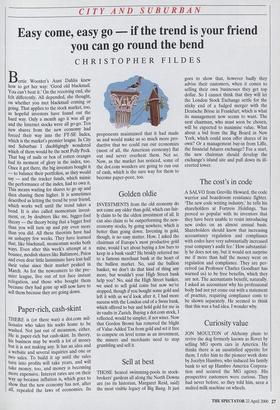 INVESTMENTS from the old economy do not come any older than gold, which can fair- ly claim to be the oldest investment of all. It can also claim to be outperforming the new- economy stocks, by going nowhere, which is better than going down. Investing in gold, though, is no easy matter. How, I asked the chairman of Europe's most productive gold mine, would I set about buying a few bars to keep in a bank vault? He briskly referred me to a famous merchant bank at the heart of the bullion market. No, said the bullion banker, we don't do that kind of thing any more, but wouldn't your High Street bank help you? No, said the High Street banker, we used to sell gold coins but now we've stopped, though if you bought some gold and left it with us we'd look after it. I had more success with the London end of a Swiss bank, which offered to buy and hold gold for me in its vaults in Zurich. Buying a dot.com stock, I reflected, would be simpler, if not wiser. Now that Gordon Brown has removed the blight of Value Added Tax from gold and set it free to compete on level terms as an investment, the miners and merchants need to stop grumbling and sell it.