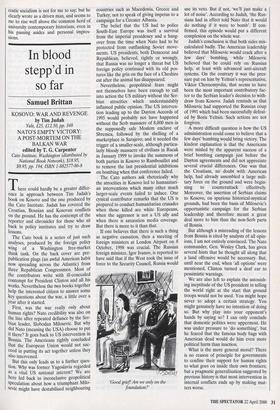 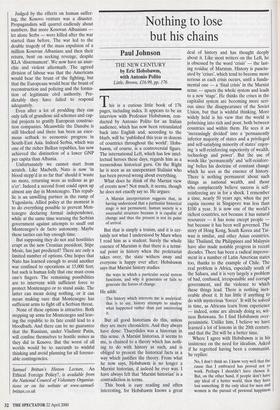 In blood stepp'd in so far

There could hardly be a greater differ- ence in approach between Tim Judah's book on Kosovo and the one produced by the Cato Institute. Judah has covered the Croatian, Bosnian and Kosovan conflicts on the ground. He has the contempt of the reporter and chronicler for those who sit back in policy institutes and try to draw lessons.

The Cato book is a series of just such analyses, produced by the foreign policy wing of a Washington free-market think tank. On the back cover are pre- publication plugs (an awful American habit now spreading across the Atlantic) from three Republican Congressmen. Most of the contributors write with ill-concealed contempt for President Clinton and all his works. Nevertheless the two books together help the interested citizen to answer some key questions about the war, a little over a year after it started.

First, was the war really only about human rights? Nato credibility was also on the line after repeated defiance by the Ser- bian leader, Slobodan Milosevic. But why did Nato (meaning the USA) choose to put it there? It goes back to US intervention in Bosnia. The Americans rightly concluded that the European Union would not suc- ceed in putting its act together unless they also intervened.

But this only leads us to a further ques- tion. Why was former Yugoslavia regarded as a vital US national interest? We are here led back to inconclusive geopolitical speculation about how a triumphant Milo- sevic might have destabilised neighbouring countries such as Macedonia, Greece and Turkey, not to speak of giving impetus to a campaign for a Greater Albania.

The belief that the US had to police South-East Europe was itself a survival from the imperial presidency and a hang- over from the time when Nato had to be protected from outflanking Soviet move- ments. US presidents, both Democrat and Republican, believed, rightly or wrongly, that Russia was no longer a threat but US foreign policy continued with its old pos- tures like the grin on the face of a Cheshire cat after the animal has disappeared.

Nevertheless, geopolitical fears might not themselves have been enough to call into action the US military without the Ser- bian atrocities which understandably inflamed public opinion. The US interven- tion leading up to the Dayton Accords of 1995 would probably not have happened without the Serb massacre of 8,000 men in the supposedly safe Moslem enclave of Sbrenica, followed by the shelling of a marketplace in Sarajevo; and it needed the trigger of a smaller-scale, although particu- larly bloody massacre of civilians in Racak in January 1999 to invoke the summons of both parties in Kosovo to Rambouillet and to remove the last presidential inhibitions on bombing when that conference failed.

The Cato authors ask rhetorically why the atrocities in Kosovo led to humanitari- an interventions which many other much larger-scale events failed to induce. One cynical contributor remarks that the US is prepared to conduct humanitarian crusades when those killed are white Europeans, when the aggressor is not a US ally and when there is saturation media coverage. But there is more to it than that.

If one believes that there is such a thing as negative causation, then a meeting of foreign ministers at London Airport on 8 October, 1998 was crucial. The Russian foreign minister, Igor Ivanov, is reported to have said that if the West took the issue of force to the Security Council, Russia would `Good grief! Are we only on the foundation?' use its veto. But if not, 'we'll just make a lot of noise'. According to Judah, 'the Rus- sians had in effect told Nato that it would do nothing if it were to bomb'. If con- firmed, this episode would put a different complexion on the whole war.

Judah's conclusion is that both sides mis- calculated badly. The American leadership believed that Milosevic would crack after a few days' bombing, while Milosevic believed that he could rely on Russian help, at least with advanced anti-aircraft systems. On the contrary it was the pres- sure put on him by Yeltsin's representative, Viktor Chernomyrdin, that seems to have been the most important contributory fac- tor to the Serbian leader's decision to with- draw from Kosovo. Judah reminds us that Milosevic had supported the Russian coup of 1991 which had been successfully defeat- ed by Boris Yeltsin. Such actions are not forgiven.

A more difficult question is how the US administration could come to believe that a few days' bombing would bring victory. The kindest explanation is that the Americans were misled by the apparent success of a brief bombing campaign just before the Dayton agreements and did not appreciate several crucial differences. One was that the Croatians, no doubt with American help, had already assembled a large mili- tary force on the ground and were begin- ning to counterattack effectively. Moreover, the assertion of Serbian claims to Kosovo, on spurious historical-mystical grounds, had been the basis of Milosevic's opportunistic campaign for the Serbian leadership and therefore meant a great deal more to him than the non-Serb parts of Bosnia.

But although a misreading of the lessons from Bosnia is cited by analysts of all opin- ions, I am not entirely convinced. The Nato commander, Gen. Wesley Clark, has given several hints that he thought all along that a land offensive would be necessary. But, until near the end, when 'all options' were mentioned, Clinton turned a deaf ear to pessimistic warnings.

We are also left to explain the astonish- ing ineptitude of the US president in telling the world right at the start that ground troops would not be used. You might hope never to adopt a certain strategy. You might genuinely have no intention of doing so. But why play into your opponent's hands by saying so? I can only conclude that domestic politics were uppermost. He was under pressure to 'do something', but he feared that the famous body bags with American dead would do him even more political harm than inaction.

What is the more general moral? There is no reason of principle for governments to confine their support for human rights to what goes on inside their own frontiers; but a pragmatic generalisation suggested by previous history is that most intervention in internal conflicts ends up by making mat- ters worse. Judged by the effects on human suffer- ing, the Kosovo venture was a disaster. Propagandists will quarrel endlessly about numbers. But more Kosovan Albanians let alone Serbs — were killed after the war started than before. The war led to the double tragedy of the mass expulsion of a million Kosovan Albanians and then their return, bent on seeking revenge, despite KLA 'disarmament'. We now have an anar- chic and violent aftermath. The agreed division of labour was that the Americans would bear the brunt of the fighting, but that the Europeans would bear the brunt of reconstruction and policing and the forma- tion of legitimate civil authority. Pre- dictably they have failed to respond adequately.

Even after a lot of prodding they can only talk of grandiose aid schemes and cap- ital projects to gratify European construc- tion companies. Meanwhile the Danube is still blocked and there has been an enor- mous setback to economic progress in South-East Asia. Indeed Serbia, which was one of the richer Balkan republics, has now achieved the distinction of a lower GNP per capita than Albania.

Unfortunately we cannot start from scratch. Like Macbeth, Nato is now 'in blood stepp'd in so far that' should it 'waste no more, returning were as tedious as go o'er'. Indeed a second front could open up almost any day in Montenegro. This repub- lic is an unwilling partner in the rump of Yugoslavia. Allied policy at the moment is to do everything possible to prevent Mon- tenegro declaring formal independence, while at the same time warning the Serbian government against attempts to snuff out Montenegro's de facto autonomy. Maybe these tactics can buy enough time.

But supposing they do not and hostilities erupt as the new Croatian president, Stipe Mesic, has just predicted? There are only a limited number of options. One hopes that Nato has learned enough to avoid another war confined to operations at 15,000 feet; but such is human folly that one must cross one's fingers. The remaining possibilities are to intervene with sufficient force to protect Montenegro or to stand aside. The latter can mean doing nothing, or it can mean making sure that Montenegro has sufficient arms to fight off a Serbian threat.

None of these options is attractive. Both stepping up arms for Montenegro and leav- ing the republic to its fate could lead to a bloodbath. And there can be no guarantee that the Russians, under Vladimir Putin, will confine themselves to hostile noises as they did in Kosovo. But the worst of all worlds would be to succumb to wishful thinking and avoid planning for all foresee- able contingencies.

Samuel Brittan's Hinton Lecture, An Ethical Foreign Policy?, is available from the National Council of Voluntary Organisa- tions or on his website at www.samuel- brittan.co.uk