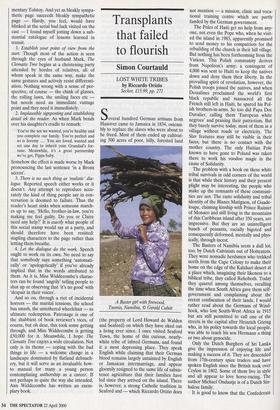 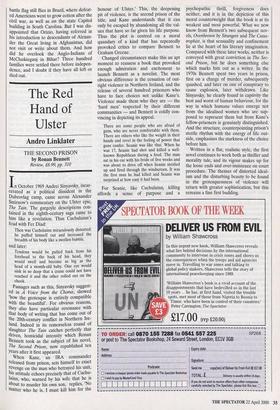 Transplants that failed to flourish

LOST WHITE TRIBES by Riccardo Orizio Secker, £15.99, pp. 271 Several hundred German artisans from Hanover came to Jamaica in 1834, ostensi- bly to replace the slaves who were about to be freed. Most of them ended up cultivat- ing 500 acres of poor, hilly, forested land A Baster girl with firewood, Tsumis, Namibia, C Gerald Cubitt (the property of Lord Howard de Walden and Seaford) on which they have eked out a living ever since. I once visited Seaford Town, the home of this curious, nearly- white tribe of inbred Germans, and found it a most depressing place. They speak English while claiming that their German blood remains largely untainted by English or Jamaican intermarriage, and appear gloomily resigned to the same life of subsis- tence agriculture that their families have led since they arrived on the island. There is, however, a strong Catholic tradition in Seaford and — which Riccardo Orizio does not mention — a mission, clinic and voca- tional training centre which are partly funded by the German government.

The Poles of Haiti get no help from any- one, not even the Pope who, when he visit- ed the island in 1983, apparently promised to send money to his compatriots for the rebuilding of the church in their hill village. But nothing has been forthcoming from the Vatican. This Polish community derives from Napoleon's army: a contingent of 4,000 was sent to Haiti to keep the natives down and deny them their liberty. In the prevailing spirit of revolution, however, the Polish troops joined the natives, and when Dessalines proclaimed the world's first black republic and massacred all the French still left in Haiti, he spared his Pol- ish brothers-in-arms. So too did Papa Doc Duvalier, calling them 'European white negroes' and praising their patriotism. But they barely survive today, most of them in a village without roads or electricity. The Slav features may still be visible in their faces, but there is no contact with the mother country. The only Haitian Pole known to have gone to Poland was taken there to work his voodoo magic in the cause of Solidarity.

The problem with a book on these white tribal survivals in odd corners of the world is that while their history and their present plight may be interesting, the people who make up the remnants of these communi- ties are not. The caste solidarity and tribal identity of the Blanes Matignon, of Guade- loupe, claiming kinship with Prince Rainier of Monaco and still living in the mountains of this Caribbean island after 350 years, are impressive. But they are an unintelligent bunch of peasants, racially bigoted and consequently deformed, mentally and phys- ically, through incest.

The Basters of Namibia seem a dull lot, too, by Dutch Calvinists out of Hottentots. They were nomadic herdsmen who trekked north from the Cape Colony to make their home on the edge of the Kalahari desert at a place which, imagining their likeness to a biblical tribe, they called Rehoboth. Today they quarrel among themselves, recalling the time when South Africa gave them self- government and complaining about the recent confiscation of their lands. I would rather read about the Germans of Wind- hoek, who lost South-West Africa in 1915 but are still permitted to call one of the streets in the capital after Heinrich Goring who, in his policy towards the local people, was able to teach his son Hermann a thing or two about genocide.

Only the Dutch Burghers of Sri Lanka give the impression of enjoying life and making a success of it. They are descended from 17th-century spice traders and have spoken English since the British took over Ceylon in 1802. Some of them live in style and all appear to love horse-racing. The author Michael Ondaatje is of a Dutch Sin- halese family.

It is good to know that the Confederate battle flag still flies in Brazil, where defeat- ed Americans went to grow cotton after the civil war, as well as on the state Capitol building in South Carolina. But I was dis- appointed that Orizio, having referred in his introduction to descendants of Alexan- der the Great living in Afghanistan, did not visit or write about them. And how did he overlook the Anglo-Indians of McCluskieganj in Bihar? Three hundred families were settled there before indepen- dence, and I doubt if they have all left or died out.