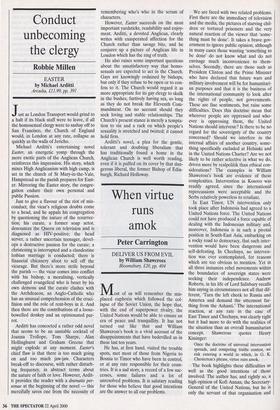 EASTER Just as London Transport would grind to a halt if its black staff were to leave, if all the homosexual clergy were to sashay off to San Francisco, the Church of England would, in London at any rate, collapse as quickly as the walls of Jericho.

Michael Arditti's entertaining novel Easter, an energetic yomp through the more exotic parts of the Anglican Church, reinforces this impression. His story, which mixes High Anglicanism with high camp, is set in the church of St Mary-in-the-Vale, Hampstead as the parish prepares for East- er. Mirroring the Easter story, the congre- gation endure their own personal and public Passion.

Just to give a flavour of the riot of mis- conduct, the vicar's religious doubts come to a head, and he appals his congregation by questioning the nature of the resurrec- tion; his curate, a former soap actor, denounces the Queen on television and is diagnosed as HIV-positive; the head server, a rather uncertain teenager, devel- ops a destructive passion for the curate; a christening is interrupted and a clandestine lesbian marriage is conducted; there is financial chicanery afoot to sell off the vicarage. But there's more strife beyond the parish — the vicar comes into conflict with his bishop, a moralising, vertically challenged evangelical who is beset by his own demons and the curate clashes with the Archdeacon, an Anglo-Catholic who has an unusual comprehension of the cruci- fixion and the role of rent-boys in it. And then there are the contributions of a loose- bowelled donkey and an opinionated par- rot.

Arditti has concocted a rather odd novel that seems to be an unstable cocktail of Joanna Trollope, Tom Sharpe, Alan Hollinghurst and Graham Greene that might explode at any moment. Easter's chief flaw is that there is too much going on and too much jaw-jaw. Characters break-off to discourse, with rather disturb- ing frequency, in abstract terms about the nature of faith or love. However, Ardit- ti provides the reader with a dramatis per- sonae at the beginning of the novel — this mercifully saves one from the necessity of remembering who's who in the scrum of characters.

However, Easter succeeds on the most important yardsticks, readability and enjoy- ment. Arditti, a devoted Anglican, clearly writes with exasperated affection for the Church rather than savage bite, and he conjures up a picture of Anglican life in London which has the ring of truth.

He also raises some important questions about the unsatisfactory way that homo- sexuals are expected to act in the Church. Gays are knowingly ordained by bishops, but only if they refuse to be open or to con- fess to it. The Church would regard it as more appropriate for its gay clergy to skulk in the bushes, furtively having sex, so long as they do not break the Eleventh Com- mandment. On no account should they seek loving and stable relationships. The Church's present stance is merely a tempta- tion to sin and a rack on which people's sexuality is stretched and twisted; it cannot hold firm.

Arditti's novel, a plea for the gentle, tolerant and doubting liberalism that has traditionally found a home in the Anglican Church is well worth reading, even if it is puffed on its cover by that dan- gerous liberal, the former Bishop of Edin- burgh, Richard Holloway.