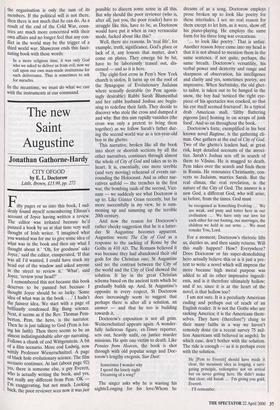 CITY OFGOD by E. L. Doctorow Little, Brown, £15.99, pp. 272 Fifty pages or so into this book, I sud- denly found myself remembering Ellman's account of Joyce having written a review. The editor was irritated because he'd panned a book by an at that time very well thought of Irish writer. 'I imagined what you wanted was for me to give some idea of what was in the book and then say what I thought about it.0h, for goodness' sake Joyce,' said the editor, exasperated, `If that was all I'd wanted, I could have stuck my head out of the window and asked anyone in the street to review it."What', said Joyce, 'review your head?' I remembered this not because this book deserves to be panned but because I thought Joyce should be so lucky. 'Some idea of what was in the book . . I hadn't the faintest idea. We start with a page of brilliantly condensed Big Bang science. Next, it seems as if the Rev. Thomas Pem- berton, Pem, the hero, is the narrator. Then he is just talking to God (Pem is los- ing his faith). Then there seems to be an almost indistinguishable alter ego narrating. Follows a chunk of cod Wittgenstein. A bit of a film scenario. More cod Ludwig, now wittily Professor Wienerschnitzel. A page of black hole evolutionary science. The film scenario continues. At last (about page 92) Yes, there is someone else, a guy Everett, who is actually writing the book, and yes, not really any different from Pem. OK - I'm exaggerating, but not much. Looking back, the poor reviewer sees now it was just possible to discern some sense in all this. But why should the poor reviewer (who is, after all, just you, the poor reader) have to struggle like this, have to be, as Doctorow would have put it when in racy vernacular mode, fucked about like this?

Well, there are reasons. In 'real life', for example, truth, significance, God's place or lack of it, any lessons that matter, don't come on plates. They emerge bit by bit, have to be laboriously teased out, dis- cerned — and so it is here.

The eight-foot cross in Pem's New York church is stolen. It turns up on the roof of the Synagogue of Evolutionary Judaism where sexually desirable (to Pem agonis- ingly desirable) Rabbi Sarah Blumenthal and her rabbi husband Joshua are begin- ning to redefine their faith. They decide to discover who stole the cross and dumped it and why. But this aim rapidly vanishes (the cross was only a pretext to bring them together) as we follow Sarah's father dur- ing the second world war as a ten-year-old boy in the ghetto. This narrative, broken like all the book into short or shortish sections by all the other narratives, continues through almost the whole of City of God and takes us to its heart. It is, essentially, one more terrible (and very moving) rehearsal of events sur- rounding the Holocaust. And as other nar- ratives unfold — the trenches in the first war, the bombing raids of the second, Viet- nam — we suddenly see what Doctorow is up to. Like Giinter Grass recently, but far more successfully in my view, he is sum- moning up and summing up the terrible 20th century.

And now the reason for Doctorow's rather cheeky suggestion that he is a latter- day St Augustine becomes apparent. Augustine wrote The City of God as a response to the sacking of Rome by the Goths in 410 AD. The Romans believed it was because they had abandoned their old gods for the Christian one; St Augustine said no: the contrast between the City of the world and the City of God showed the solution. It lay in the great Christian schema based on the ancient texts which he gradually builds up. And, St Augustine's opposite in every respect, St Doctorow does increasingly seem to suggest that perhaps there is after all a solution, an answer — and that he too is building towards it.

Doctorow's exposition is not all grim. Weinerschnitzel appears again. A wonder- fully ludicrous figure, ex-Times reporter, sets out, heavily unfit, on justice murder missions. He spits one victim to death. Like Pennies from Heaven, the book is shot through with old popular songs and Doc- torow's lengthy exegesis. Star Dust:

Sometimes I wonder why I spend the lonely night Dreaming of a song?

The singer asks why he is wasting his nights/Longing for his love/Whom he dreams of as a song. Doctorow employs prose broken up to look like poetry for these interludes. I see no real reason for them except to let him, as it were, show off his piano-playing. He employs the same form for his three long war evocations.

to look like poetry.' That is unfair. Another reason Joyce came into my head is that it is not absurd to mention them in the same sentence, if not quite, perhaps, the same breath. Doctorow's versatility, his verbal power and dexterity and range and sharpness of observation, his intelligence and clarity and yes, sometimes poetry, are impressive. When Srebnitsky, the old ghet- to tailor, is taken out to be hanged in the snow, the boy had 'noticed the right eye- piece of his spectacles was cracked, so that his eye itself seemed fractured'. In a typical drab American mall, 'filthy fluttering pigeons [are] homing in on scraps of junk food'. And so on throughout the book.

Doctorow's forte, exemplified in his best known novel Ragtime, is the gathering cli- max. One gathers at the end of City of God. Two of the ghetto's leaders had, at great risk, kept detailed accounts of the atroci- ties. Sarah's Joshua sets off in search of them to Vilnius. He is mugged to death. Pem takes over the search and finds them in Russia. He renounces Christianity, con- verts to Judaism, marries Sarah. But the real climax, the real revelation, is the nature of the City of God. The answer is a new God, a different God, who will arise, as before, from the times. God must

be recognised as Something Evolving ... We are weak, and puny and totter here in our civilisation ... We have only our love for each other for our footing, our marriages, the children we hold in our arms ... We must remake You, Lord.

For a moment, Doctorow's rhetoric lifts us, dazzles us, and then sanity returns. Will this really happen? How? Everywhere? Does Doctorow or his super-demolishing hero actually believe this or is it just a pre- text to write a novel which will impress the more because high moral purpose was added to all its other impressive ingredi- ents, and is it therefore ultimately hollow; and if so, since it is at the heart of the novel, is that hollow too?

I am not sure. It is a peculiarly American ending and perhaps out of reach of an English reader. It is not the Goths who are sacking America; it is the Americans them- selves. They have (therefore?) clung to their many faiths in a way we haven't remotely done (in a recent survey 75 mil- lion Americans still believed in angels). In which case, don't bother with the solution. The ride is enough — as it is perhaps even with the solution.

He [Pem to Everett] should have made it clear, the messianic idea as longing, a navi- gating principle, redemptive not on arrival but on never getting here. He didn't make that clear, old Isaiah ... I'm giving you gold, Everett.